He waited for bowlers to bowl in the spots he wanted, to construct a smart, valuable innings at The Oval.

Steven Smith scored a well-planned century to help put Australia ahead at The Oval. The effort was built on good judgment of balls to attack and defend. Abhishek Mukherjee looks at how his innings developed through the course of two days.

Steven Smith epitomised age-old values of playing each ball on its merit as he scored a patient century on second day. He spoke about ‘grit and determination’ being the mantra in the lead-up to this Test following dramatic losses for his team at Edgbaston and Trent Bridge, and displayed it alongside key top-order batsmen.

Though runs are what batsmen are statistically remembered by, the ball left and defended with concentration is the necessary sacrifice to get the boundary balls — a matter of logic and probability. Smith spoke about the need to make use of the occasionally inaccurate ball, or a ball there to be hit, to succeed on the testing wicket. He did just that, with a majority of his boundaries coming in the arc from gully to mid-off: the over-pitched ball, wide outside off stump, was his perfect ball ripe to attack. His 143 guided an under-confident team towards the security of a large first-innings total that looks more threatening with the opposition collapse at the end of Day Two. READ: Steven Smith: 192, 199 and then 215 — the record-making machine

The signals began with openers Chris Rogers and David Warner intent to play out a stroke-less first hour. The first boundary was scored only after 14 overs, only when new-ball bowlers Mark Wood and Stuart Broad made way for a first-change bowler in Ben Stokes. A cautious, respectable partnership later, Smith arrived at the wicket, and struggled to find fluency.

He poked around, defended, and left balls, as his settled partner Warner went about getting the fours. Smith’s first four, on the other hand, was a streaky boundary off an inside edge. Before this shot, he had scored 5 off 21 balls. But after a few more overs of diffusing the threat of fast bowlers by inactivity, he gracefully stroked Steven Finn through mid-off off a full-ish ball.

When Broad and Wood came back to bowl in tandem, he duly put the shutters down, left and blocked. Only after a ten-over period did he hit another four, a wristy slash off a wide, short ball from Finn. But he repeated it with three more, all around extra-cover, the last one off Stokes giving him his half-century, a well-earned one. READ: Steven Smith first Australian in 18 years to score 500 runs in an Ashes series in England

To celebrate it, he smote Moeen Ali for six through long-off, coming down the track and lofting the ball sweetly. His first four off Wood arrived in the 67th over, only off a loose delivery, about an hour before close of the day’s play, and he resumed his leaves and blocks the morning of the next day. The confidence gathered the previous day allowed him to play his strokes more often, also as the balls outside the off stump were learnt to be dealt with.

It could have given away his wicket, though, as the lure worked when he was on 92: he chased a wide delivery pitched back of a length to smash it past backward point, but got an edge through to the wicketkeeper. He was on his way back to the pavilion when the knowledge of a front-foot no-ball brought him back to the wicket, as he looked up to the heavens for his chance. The restraint was back; lures would not work on him now unless the ball was pitched full.

He reached his century without much ado, and as he had done after scoring a fifty, he celebrated it by depositing Moeen for another six off a similar shot. His first boundary to leg arrived in the next over: though he had pulled confidently now and then, he had not attempted a single slog or swipe through the leg. If runs had to be taken, conventional drives would be the way to go. READ: Steven Smith goes past 3000 Test runs on first day of 5th Ashes Test at The Oval

He picked up two more boundaries through the leg side, off a half-tracker from Wood and a full one from Ali, which was swept. Then he started to execute the late cuts and dabs; he had gained enough time at the crease to up the attack a bit, and Mitchell Starc at the other end played his strokes freely to dent the confidence of England’s bowlers, something Smith looked to pounce on.

Looking to force Finn through point, he chopped on and departed. A simple, hard-working effort from him brought his prolific form back, and reinforced the importance of the bland and the mundane, at least on this English track. En route, he went past 500 runs this series, the best by an Australian batsman in England since Matthew Elliott’s runs in 1997, and this despite four single-digit scores.

Smith is capable of attacking in his own way, without being Kevin Pietersen; the positive factor is the knowledge of his game. The difference in this innings from his unit, in comparison with Edgbaston and Trent Bridge, was there was single-mindedness. 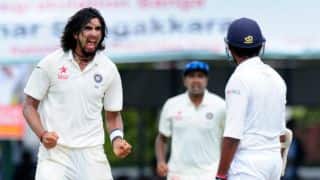 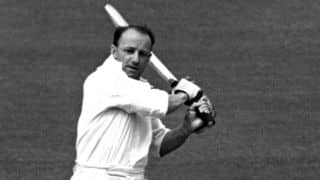