Earlier, Steven Smith became the eighth batsman to get out for 199 in Tests.

Steven Smith scored his maiden Test double century at Lord’s in the second test of Ashes 2015. He was out in 190s twice before getting to this milestone. Bharath Seervi highlights Smith’s feat and others who pulled off something similar.

Steven Smith has become a run-machine for Australia of late. He has showed his penchant for scoring big hundreds batting at No. 3 for Australia in Tests. His maiden Test ton was 138 not out in last Ashes in England at The Oval. His next three tons were 111, 115 and 100. But since the Border-Gavaskar series against India from December 2014 his tons have been huge. The last three of his four 100s have been in excess of 190. He scored 162* and 133 in the series against India as well. READ: Chris Rogers, is it really your time to retire?

Smith got to his maiden Test double ton at the Lord’s in the first innings of the second Ashes Test. He came closer twice to the landmark 200 but missed narrowly. He was out for 192 against India at MCG in the Boxing Day Test, and fell short by one run against West Indies at Sabina Park last month. Getting out in the 190s not rare in Test history, but scoring 200 after two 190s is. READ: England’s top order a major issue

Including Smith there are five batsmen who suffered two nervous 190s before getting a double ton (or not getting there at all). Of the five, Smith is only the second to score a double century later in career while three of them never got past the nervous figure and that remained their highest in Test career. READ: Stuart Broad, England’s only positive on a day of agony

Mohammad Hafeez is the only batsman before Smith to break the barrier of Test double century after falling short by less than 10. He was out for 196 against Sri Lanka at SSC in 2012 and bettered it in November 2014, unfortunately by just 1 run, getting out for 197 against New Zealand at Sharjah. He scored 224 against Bangladesh at Khulna in April this year as his maiden Test double ton.

Interestingly, in the Test history of nearly 140 years, only two players have done this, both being current players from this decade.

As mentioned above, there are three batsmen who got out twice in 190s but never scored a double century in their entire career. The table below has the details of those three — Ian Chappell, Mohammad Azharuddin and Michael Vaughan.

– Vaughan suffered this fate in the same series in span of three tests. They were his fourth and fifth Test 100s. He played another 59 Tests spanning six years and scored 13 more 100s but 197 remained the highest.

– It is interesting to note is both Smith and Hafeez bettered their score of first nervous 190s in their second and got to their maiden 200. On the other hand, for Chappell, Azhar or Vaughan, their second 190 was lower than their first: their first 190 remained their highest!

Scoring a double century after getting out for 199

Smith became the eighth batsman to get out for 199 in Tests. He soon scored a 200. Of these eight, four never scored any double century further in their careers while four (including Smith) did so.

Sanath Jayasuriya, Younis Khan, Ian Bell and Smith scored double-hundreds after getting out for 199. Mudassar Nazar, Azhar, Matthew Elliott and Steve Waugh didn’t do so.

199 remained the highest scores for Azhar and Elliott. Waugh, on the other hand, scored exactly 200 earlier in his career, while Mudassar had a 231. Jayasuriya and Younis scored double centuries before and after their 199s. 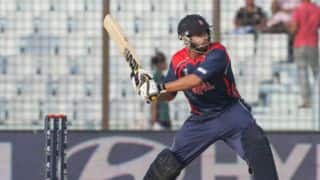