Despite no Test appearances between them, Roy and Archer could make England's squad.

After England‘s incredible victory over New Zealand in the ICC Cricket World Cup 2019 final at Lord’s on July 14, the next target for the home team is next month’s Ashes series against Australia.

This summer was billed as potentially historic by the likes of England’s limited-overs skipper Eoin Morgan and Test captain Joe Root earlier this year, with the World Cup followed by the Ashes. The bigger target has been ticked off by Morgan’s team winning England’s first World Cup title ever, and as the format changes to Test cricket, Root’s team has designs on reclaiming the Ashes from Australia.

From England’s historic World Cup triumph, two names have been tipped to break into the Test squad for the Ashes: opening batsman Jason Roy and fast bowler Jofra Archer. Before the Ashes start on August 1, England play a one-off Test match versus Ireland at Lord’s from July 24 and Roy and Archer could be named in the squad for that fixture.

(READ: Cricket World Cup 2019 The team of the tournament)

After the Test series in the West Indies in early 2019, England coach Trevor Bayliss said that Roy and his World Cup team-mate James Vince were in the fray for the Ashes this summer. His comments were made in the wake of England’s shock Test series loss to West Indies, during which Rory Burns managed 145 runs from three matches as opener, Keaton Jennings 62 from two and the debutant Joe Denly 112 from two.

England opened with Burns and Jennings opening in the first and third Tests, with the 32-year-old Denly making his debut as Burns opening partner in the second match. When Jennings was brought back for the St Lucia Test, Denly dropped down to No 3 from where he made 20 and 69.

Now, after a stellar World Cup, Roy’s chances of breaking into the Test team appear better than ever before despite playing eight first-class matches since June 2017. He batted seven times during the World Cup and five times reached 50 – with one century (153) – to end with 443 runs at an average of 63.28 and strike-rate of 115.36.

(READ: The greatest ODI finish – A matter of boundaries and freak luck)

Roy finished well behind other openers such as Australia’s Aaron Finch (507) and David Warner (647) and India’s Rohit Sharma (648), but that s largely because he missed three matches with injury. When he played, Roy was hugely significant to England s success in the Powerplay overs and his presence saw Jonny Bairstow lift his game significantly to score two centuries.

This run of form from Roy has been singled out by several former England players as reason to get him opening in Tests, especially with Burns and Jennings yet to convince. The opening conundrum in Tests has been a problem for England since Andrew Strauss retired in 2012, and since then the selectors have tried out 13 different opening partners for the now retired Alastair Cook, none of whom has done enough to hold down his spot.

Earlier this month, after Bayliss hinted that Roy could be in consideration for the Ireland Test match, Roy spoke of his desire to play Test cricket. “There has been a bit of chat and you can’t avoid it, but playing Test cricket and in the Ashes has been an ambition of mine for years,” he told Sky Sports.

Roy, 28, averages 38.38 from 132 first-class innings, with nine centuries and 22 half-centuries. He has mostly batted in the middle order in first-class matches for Surrey, but twice during the 2018-19 season he batted at No 3 in three matches, scoring 63 against Somerset, 5 and 128 versus Essex and 59 and 14 for England Lions versus Pakistan A in Abu Dhabi.

“I think I’m better off at the top of the order and then I can give it a go from there,” said Roy. “I’ve played a lot of white-ball games for England so if I get a chance then that should hold me in good stead. Everyone knows what I’m about so if I get caught at fourth slip driving at a ball that maybe a ‘traditional’ Test cricketer wouldn’t drive at, then people hopefully won’t be too outraged by that.”

The man who could potentially have been picked ahead of him, Hampshire’s Vince, has foreseeably faded from contention in Tests after tallying 40 runs in three World Cup matches when filling in for the injured Roy.

The case for Archer is not as strong as Roy’s given that England have a settled fast-bowling attack, but news that Test record-holder James Anderson may not be fit for the start of the Ashes does boost his chances after a superb World Cup.

Aged 24, and less than two months into his international career, there was Archer keeping his wits about him to bowl the first Super Over in a World Cup final on July 14. It spoke volumes of his rise at this tender age, and of the faith that Morgan has in him. Archer bowled fast all through the World Cup, clocking the joint-fastest ball of the tournament. He took wickets upfront and at the death and his 20 wickets are an England record at a single World Cup.

Viewed as a white-ball specialist, Archer has played 28 first-class matches, all for Sussex between 2016 and 2018, from which he has claimed 131 wickets at 23.44 apiece with five five-wicket hauls and once taking ten in a game.

England’s director of cricket Ashley Giles has backed Roy and Archer to play the Ashes.

“I m not a selector, but I think they have made a great case,” he told talkSPORT. “Jason Roy, talk about getting our mojo back when he came back into the team, he really gave us that ignition at the top of the order. He is a really accomplished and dangerous player but very mature now. I would have thought his hat is well and truly in the ring for the Ashes.

“Jofra has been a revelation really to come in. Talk about horizontal, he has been just calm and relaxed but at the same time can bowl the best part of 100mph. He s been a great addition to this team.”

And thus, despite no Test appearances between them, Roy and Archer could find that scripting ODI history with England can earn you a chance in Test cricket. 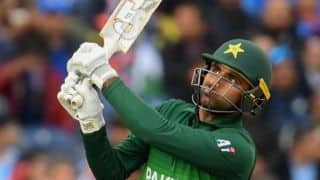