Presenting the 11 most valuable players of the Cricket World Cup.

Now that the ICC Cricket World Cup 2019 is over, we take a look at the 11 most valuable players of the tournament.

England’s man of the tournament? It would be hard to dispute that, given the impact that Jason Roy up front in the Powerplay overs and in getting the best out of his opening partner Jonny Bairstow. Roy finished well behind other openers such as Aaron Finch and David Warner, but that’s largely because he missed three matches with injury. When he played, Roy was hugely significant to England’s success: he batted seven times, and five times reached 50. If there is one player who underlines England’s white-ball swagger since the 2015 World Cup, it is is Roy and in this tournament he was scintillating to watch.

The most hundreds in a single World Cup. The most World Cup hundreds for India. Rohit Sharma began the tournament with 122* to help India beat South Africa, an innings that Virat Kohli termed the best he’d seen from Rohit. Forged opening stands of 127, 180 and 189 to give India good starts. Admitted he was frustrated with consecutive scores of 102, 104 and 103, because his aim is to convert such innings into daddy hundreds. A treat to watch.

Led New Zealand admirably into the final, where their fans will feel they were robbed. Got a standing ovation after his press conference after the final, and looked surprised to hear that he’d been named Player of the Tournament. Ladies and gentlemen, Kane Williamson. His batting was so vital to New Zealand reaching the final, because there was not enough support from Martin Guptill, Henry Nicholls, Colin Munro and Tom Latham. His centuries against South Africa, in that narrow last-over win, and West Indies were special. Even when he didn’t get big scores, Williamson was the glue that held the Black Caps’ batting together. Has a nicer man lost a World Cup final?

The leader of Bangladesh’s charge in England, Shakib Al Hasan was the World Cup’s leading allrounder. Two hundreds, five fifties and a lowest score of 40. Eleven wickets, five of them to help beat Afghanistan. All this, when not 100% fit. Simply outstanding from Shakib, who was the heart and soul of Bangladesh’s campaign. Only he, Rohit and Warner got to 600 runs, and his runs came on all sorts of surfaces and against each team. Many will feel aggrieved that Shakib did not get the nod for Player of the Tournament.

(READ: To hell and back Stokes redemption rewards England its crowning jewel)

The best No 5 in ODI cricket? Ben Stokes can lay claims to that title. Not just because he was Man of the Match in the greatest ODI finish of all time, but because of his consistency across the World Cup, ability to suss out conditions and pitches and chip in with big wickets. Of his eight half-centuries, four were in the 80s including that unbeaten 84 in the final. And then there was that spectacular catch in the tournament opener.

The stats don’t tell the story of allrounder Jimmy Neesham‘s contribution to New Zealand making their second successive World Cup final. Batting at No 6, he helped Williamson add runs in tricky situations, even though you could accuse him of throwing away dogged starts. Against Bangladesh, Neesham’s 25 helped get the score from 162/4 to 218/7. Against South Africa, he made 23 with Williamson after New Zealand’s chase was 80/4. Against West Indies, his quick 28 helped get New Zealand from 210/4 to 291. In the loss to Pakistan, New Zealand would never have reached 237/6 from 83/5 without Neesham’s unbeaten 97. Among his 15 wickets was a maiden ODI five-wicket haul and 3/43 in the final.

The second most successful wicketkeeper of the tournament, Alex Carey had a breakout tournament, scoring valuable runs from the lower middle order while repeatedly coming to Australia s rescue. His 375 runs at an average of 62.50 and strike-rate of 104.16 set him aside as a superb lower-order option.

Carey produced vital innings from crunch situations: 45 off 55 balls when Australia had lost half their side for 79 versus West Indies, 55* from 35 in the loss to India to keep the chase alive, 38* off 27 against England to drag the score to 285/7, 71 off 72 balls against New Zealand to earn his first Man-of-the-Match award and then 85 off 69 in defeat to South Africa. During the semi-final he was struck on the head by a bouncer from Jofra Archer that drew blood, but resumed batting with a makeshift bandage around his chin and scored 46 off 70 balls to revive Australia s innings.

Australia’s pace spearhead Mitchell Starc beat his tally from the 2015 World Cup with 27 wickets, thus becoming the most successful bowler at a single edition. Back in the ODI setup after a prolonged absence, Starc was fast and menacing and helped Australia into the semi-finals.

It was Starc who shaped Australia s win over West Indies, first returning to get Andre Russell in the 39th over and then Jason Holder and Carlos Brathwaite during the 46th en route to a five-wicket haul. Against Pakistan at Taunton, it was Starc s extraction of Wahab Riaz for 45, followed by Mohammad Amir two balls later, that turned around a dangerous situation. Against Sri Lanka, his 4/55 pulled back a dangerous chase. Against New Zealand at Lord s, Starc added another second five-wicket haul.

New Zealand’s highest wicket-taker, Lockie Ferguson made his first World Cup a memorable one. His pace and bounce unsettled batsmen of various skills levels across teams and surfaces, but what really stood out is Ferguson’s success in the middle overs. Invariably, whenever Williamson called himF Ferguson deliveried. His potency meant that New Zealand had the best average between overs 11 to 40 and economy rate. And what a fielder Ferguson is. That catch in the final to get Eoin Morgan was ridiculous.

Aged 24, and less than two months into his international career, there was Jofra Archer keeping his wits about him to bowl the first Super Over in a World Cup final. It spoke volumes of his rise at this tender age, and of the faith that Morgan has in him. Archer bowled fast all tournament, clocking the joint-fastest ball of the tournament. He took wickets upfront and at the death, with that surprisingly deceptive run-up and action. His 20 wickets are an England record at a single World Cup. Not bad for a bowler whose place in England’s squad was questioned a few months ago.

Jasprit Bumrah underscored his title of the No 1 bowler in ODIs with a superb World Cup, his first. Controlling upfront, lethal in the middle overs and successful at the death. Kohli’s go-to man, Bumrah almost always delivered a wicket when he was called on for a second and third spell. Particularly, he was impressive between overs 30 and 50, taking wickets and keeping a lid on the runs. Note the economy rate: 4.41. 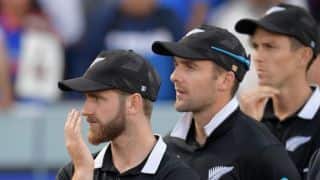