To hell and back: Ben Stokes' incredible redemption rewards England its crowning jewel

To hell and back: Ben Stokes' incredible redemption rewards England its crowning jewel

LONDON: April 3, 2016. World T20 final. Set 156 to beat England and win the championship, West Indies found themselves needing 19 off the last over, to be bowled by Ben Stokes. Nine out of ten times, it was England’s game, but Carlos Brathwaite pulled of a stunner like never before and in four balls smashed four sixes to lead West Indies to their second World T20 title. Brathwaite was ecstatic. Stokes down on his knees.

In September 2017, a video footage was released which showed Stokes punching two men around 2AM in the night. He was arrested for one night and the issue was escalated to court procedures. Due to legal processes, Stokes, initially named vice-captain of the side was pulled out from the 2017-18 Ashes. In January 2018, he was charged with affray. The trial for it started on August 6 and Stokes was acquitted eight days later.

Stokes was at the middle. Chasing 233 to win, England were in a spot of bother. 30 needed off 24. He had just taken 15 runs of Isuru Udana’s over. Off the last ball of the 47th, Mark Wood, England’s last man, feathered Lasith Malinga behind. Stokes remained unbeaten and heartbroken on a quite magnificent 82 off 89 balls. Next game against Australia, England needed 286 to win. They had lost their top order and were 124/5.

Stokes rose to the occasion again. He kept England in the hunt with a magnificently crafted 89. When he was eventually bowled by a yorker from Mitchell Starc, the game was effectively lost. Stokes dropped his bad and left in exasperation.

To sum up, that’s how life had been for Stokes in the last three years. Turmoil-filled and ever so close to the mark. Even when he did perform in the World Cup, the results did not go in England’s favour. During those innings of 80-odd runs, Stokes was gutted about not being able to take England over the line. Blamed for costing them the World T20 and vilified for a drunken street brawl, Stokes achieved his redemption on the biggest possible stage the World Cup final.

England were struggling at 86/4. Runs had dried up and New Zealand could sense something coming maybe another wicket. Eoin Morgan and Jonny Bairstow had just gotten out and the asking rate was creeping up to over 6.5 an over. The English crowd had gone awfully quiet, New Zealand section having a blast. Would the World Cup 2019 add to the list of Eden Gardens ’16 or the Champions Trophy final of 2004? With the World Cup taking place on their home soil, will England choke on the final hurdle again?

For every English fan, it was natural to cater to these thoughts. The one man who didn’t however, kept batting and brought up a strong, inspiring 100-run partnership with Jos Buttler. Stokes had been in this scenario already a couple of times in the tournament and he wasn’t going to leave the business unfinished a third time. Hence, even with wickets falling, Stokes kept going, until the equation was brought down to 16 off six. Trusting his instincts, he denied singles off the first two balls before smoking a maximum and scampering through for a double.

He put in the dive and the ball deflected off his bat and went to the boundary. Stokes kept England alive. When he took the game into the Super Over, Stokes top scored with 84 not out off 98 balls while batting fatigue and added a further eight runs from three balls in the Super Over. If there was ever a time England needed the super-human traits of Stokes to come to the fore, now was it. He was carrying a country’s hopes and the unbearable weight of England’s disappointments in ICC tournaments.

This World Cup has genuinely been about Stokes the batsman. Having played a minimal role with the ball, Stokes’ bat has created ripples equivalent to Thor’s Mjolnir and Captain America’s shield. In professional wrestling, athletes, in a bid to stage a comeback use steel chairs to gain momentum and at times, even take undue advantage.

Similarly, Stokes apologised for the bonus boundary, but when he raised his arms, it was a signal he wouldn’t deny those critical four runs. His innings of 79 against India turned out to be a match-winning one. Even at Edgbaston, England had lost three wickets in quick succession to Mohammed Shami and it was Stokes who almost batted till the end.

Stokes’ batting with the tail was what takes the cake. He denied singles to farm strike when it seemed correct and when not, brought out the big bat swing. England’s final five wickets added 38 runs, of which the last five batsmen added 12 the last three 0. His role did not just end there. There was a reason why Jofra Archer didn’t appear nervous while bowling that Super Over and that was because Stokes’ advice in the dressing room had kept him calm, which is what Archer revealed. Stokes was there at Eden Gardens three years ago; he wouldn’t have let Archer or anyone else go through the nightmare of a final over.

On the day of the final, the atmosphere, the emotion which Stokes was going through, he dealt it in a very experience manner. At the very beginning of the tournament, Morgan mentioned how he and his England wish to inspire a whole new generation to take up and popularise cricket even further. Well, on July 15, a lot of them would wake up wanting to be professional cricketers with Stokes and his cricketing skills being their role model.

“Yes, I have said this a number of times about Ben. I think a lot of careers would have been ended after what happened in Calcutta. Ben on numerous occasions has stood up individually and in a unit for us. He leads the way in training, in any team meetings we have, and he’s an incredible cricketer. And today he’s had a huge day out and obviously we are thankful for that,” Morgan said about Stokes, who gave the skipper his finest cricketing moment, both as captain and player.

The way he did his things Sunday, it was a surprise England did not ask Stokes to bowl that Super Over. Compare Stokes’ knock to those played in a World Cup final, it’s got to be right up there with MS Dhoni’s unbeaten 91 during India’s magical night in Mumbai eight years ago. Both Dhoni and Stokes are destiny’s children. They even played for the same IPL franchise Rising Pune Supergiants for a couple of seasons.

And now, both are World Cup winners. 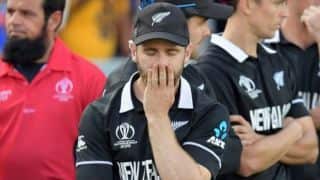