This was the first time McCullum was dismissed without scoring this World Cup.

New Zealand were cleaned up for 183 against Australia in the ICC Cricket World Cup 2015 final at the Melbourne Cricket Ground (MCG). Incidentally, it was the same score India managed in the 1983 final, where they beat West Indies. Shiamak Unwalla looks back at some of the highlights of New Zealand’s innings.

1. Mitchell Starc beats Brendon McCullum; breaks New Zealand: Starc opened bowling, and Martin Guptill faced the first ball of the final. McCullum was on strike soon enough. He swung and missed at the first two balls before getting bowled for a three-ball duck. This was the first time McCullum was dismissed without scoring this World Cup, and it set New Zealand back immensely. ICC Cricket World Cup 2015: SCHEDULE & MATCH DETAILS

2. Three in a row at the start: After McCullum was dismissed with the score on one, Guptill and Kane Williamson looked to consolidate, putting on another 32 from about 10 overs. Having seen off the hostile opening bursts from Starc, Mitchell Johnson, and Josh Hazlewood, Guptill played down the wrong line and was bowled by Glenn Maxwell, of all people. One over later, Johnson got Williamson to chip the ball back to him to leave New Zealand reeling at 39 for three. Top 10 batsmen in ICC Cricket World Cup 2015

3. Mohinder Amarnath, Aravinda de Silva, Shane Warne, Grant Elliott? Mohinder was the first man to be named Man of the Match in both the semi-final and the final of a World Cup. That was when India won the World Cup for the first time, back in 1983. Since then Aravinda (1996) and Warne (1999) have replicated that effort. Top 10 bowlers in ICC Cricket World Cup 2015

Elliott had scored a match-winning 84 not out in the semi-final to guide New Zealand home against South Africa. He top-scored again in the final with 83 off 82 deliveries with seven fours and a six. It remains to be seen whether this score will be another match-winning one. Top 10 fielders in ICC Cricket World Cup 2015

4. Seven for 33: Tim Southee had snared seven for 33 against England earlier in the tournament. New Zealand tasted their own medicine against Australia, though. After Elliott and Ross Taylor added a superb 111 runs for the fourth wicket they seemed set to kick on to a big total. The first ball of the power play yielded Taylor’s wicket, and the third Corey Anderson‘s. One run later Luke Ronchi was back in the hut. Daniel Vettori, Elliott, Matt Henry, and finally Southee could only manage 32 more runs between them. New Zealand lost seven for 33 runs — the same figures Southee had registered earlier on. Top 10 wicketkeepers in ICC Cricket World Cup 2015 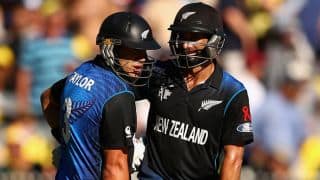