We might witness South Africa's star batsman AB de Villiers having some kind of a joust with leg-break bowler Adam Zampa.

Australia and South Africa will square off in Match 7 of Tri-Nation series on Sunday. The venue of the contest is Kensington Oval at Bridgetown, Barbados. These two teams have played against each other twice in this series. South Africa won the first game played in Guyana by 47 runs, majorly due to good performances by Farhaan Behardien and Kagiso Rabada. Australia showed resolve by winning the next tie by 36 runs. David Warner, with his magnificent and refined century guided Australia to 288. In reply, South Africa were bowled out for 252. FULL CRICKET SCORECARD: Australia vs South Africa, Tri-Nation series, 7th ODI at Barbados

Today’s game is crucial for both Australia and South Africa, bearing in mind that all the three teams including West Indies are closely ranked in the current standings. Not to mention the tournament is entering its final stage. Bhaskar Narayan goes through a few chief encounters likely to take place between these two sides.

1. AB de Villiers vs Adam Zampa: We might witness South Africa’s star batsman AB de Villiers having some kind of a joust with leg-break bowler Adam Zampa. De Villiers is in a league of his own in present day cricket. He has the ability to pulverise the opposition but somehow he has not appeared to be in his own in this tournament. AB got starts in all the four matches but could not take them forward. On all the previous occasions he got out off a fast bowler. Nonetheless, it does not means that Zampa cannot pose him a threat. If de Villiers succeeds in winning this battle of critical importance for the match, this might tilt the momentum towards South Africa. It will act as the pivot around which other major encounters are expected to rotate.

2. Hashim Amla vs Mitchell Starc: Amla and Starc are extremely talented cricketers slightly more when it comes to limited-overs cricket. It will be interesting to observe if Amla, who can be quite destructive at times tackles the swing and variations of Starc. Amla has been in sublime touch throughout the tournament. Starc has been among wickets as well though he has not featured in all the games. Let’s see if he gets the better of Amla in the match on Sunday. Starc did bowl to Amla in the last clash but he could not pose any serious threat. Tri-Nation series 2016, 7th ODI, Australia vs South Africa, Preview and Predictions: Both teams eyeing a place in final

3. Steven Smith vs Imran Tahir: Australian skipper Steven Smith has regained his form of late smashing two fifties in his last two matches. Tahir was simply amazing in the last game against West Indies. He scripted his name in record books by becoming the fastest to 100 ODI wickets for a South African bowler reaching the landmark in 58 matches. Tahir with his 7 for 45 runs in 9 overs broke the backbone of the Caribbeans taking the Proteas to a 139-run victory. He can be equally devastating against Australia. Smith will have to ensure that he neutralises the Tahir factor.

4. Glenn Maxwell vs Tabraiz Shamsi: Maxwell, regarded to be extremely destructive on a given day, and his penchant to hit gigantic sixes will be tested when he comes to bat against left-arm spin bowler Tabraiz Shamsi. Maxwell can wreck havoc right from the beginning as he does not needs many balls to get his eye in. It will be prudent on his part if he does not alters his natural game, but at the same time gives some respect to Shamsi, a bowler who often traps the batters with his crafty approach.

Father's Day special: Identify the child, who is star batsman of Team India, with his father 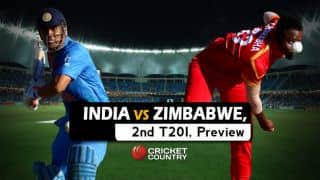