Australia have earned the right to be called the undisputed champions after leveling terms with Brazil, who have the same amount of World Cup wins in Football.

March 29, 2015 saw history being re-written in the field of sports once again, as Australia became the crowned world champions in cricket by winning the ICC Cricket World Cup 2015 for a record fifth time. Not just they reclaimed the top honour, but also earned the right to be called the undisputed champions after levelling terms with Brazil, who have the same amount of World Cup wins in Football. Ayush Gupta takes a look and relives the history of both the teams, simultaneously on their auspicious journey so far..

As the cricketing extravaganza of the year, the eleventh edition of the ICC Cricket World Cup 2015 in Australia and New Zealand came to an enthralling end, as the co-hosts, Australia won their fifth world title by beating New Zealand by seven wickets at the Melbourne Cricket Ground (MCG). The fifth title for Australia is highest in cricket. . The win took Australia at par with Brazil, who too have the same number of FIFA World Cup titles. Lets have a look at the enthralling journey of the Champions in Yellow : ICC Cricket World Cup 2015: Top 10 most memorable moments

Latin American football powerhouse, Brazil won their maiden FIFA World Cup title during the fifth edition, hosted by Sweden. They had a comfortable run in the tournament right from the group stage, winning a couple of games and drawing one of their allotted three games and sailed comfortably through to the knockout stages, beating Wales 1-0 in the quarter-final, then drubbing the France 5-2 in the semi-final and progressing to the final, where they beat the hosts, Sweden 5-2, including a couple of braces by Brazilian legends, Pele and Vava.

Australia, on the other hand, won their maiden championship in 1987 during the fourth edition of World Cup, held in India. Australia had a memorable stint during this tournament, winning five of their six games in the group stage and beating Pakistan in a thrilling fashion by 18 runs in the semi-final to reach the final at Eden Gardens in Kolkata. Australia beat the arch-rivals, England by just seven runs in a nail-biting, thrilling encounter to lift their maiden World Cup trophy. David Boon s impressive knock of 75 and being the leading run-scorer for Australia in the tournament did the trick. Craig McDermott was also the leading wicket-taker.

Brazil continued their magical run and world domination in the next edition as well, as they made it two in a row in Chile. They sailed to the knock out stages after a couple of wins and a loss in the group stage. They beat England 3-1 in the quarters and tamed the host, Chile 4-2 before mauling Czechoslovakia 3-1 in the final, including another touch of gold from the previous edition in the form of Vava, who scored the winning goal to help Samba lift their second title on the trot, equalling the record of Italy with a couple of titles as well. Garrincha and Vava were the top goal scorers.

Australia, on the other hand, unlike Brazil, had to wait 12 years to grab their second title in the sport, and it came during the 1999 ICC Cricket World Cup in England, which also marked the beginning of the golden era of Australia. Australia started the tournament by finishing second in the group stage, winning three games and losing a couple.. In the super-six stage, Australia again finished second. The semi-final saw a bit of drama, after their game against South Africa at Edgbaston was tied and they progressed owing to their higher rank in the super-six stage, above Pakistan. The final saw an easy winning affair for Australia, who beat Pakistan by eight wickets in a low-scoring tie and level with the West Indies for two titles as well. Shane Warne s three-wicket haul for 44 was enough as he was adjudged Man of the Match and was also the leading wicket-taker of the tournament, followed by Steve Waugh as the leading run-scorer.

Brazil, after having made a two in a row missed out on the 1966 edition. However, it made them come back stronger in 1970 in Mexico. Brazil began on a convincing note, winning all three group stage encounters. In the quarter-final, Brazil drubbed Peru 4-2, followed by a 3-1 thrashing of fellow Latin American powerhouse, Uruguay. In the memorable final, they faced Italy and made them suffer their worst defeat in a final by a margin of 4-1, followed by the opening goal from legendary Pele and the winning goal by Carlos Alberto to lift their third title, thus beating Italy s record of two World Cup wins.

Australia continued their dream run from 1999 to 2003 in South Africa, winning their third title and second on trot. This was by far the best tournament for Australia, who started group stage campaign in a convincing manner, winning all the six games, and also winning all their three games in the super-six stage. In the semi-final, they beat Sri Lanka by 48 runs (via Duckworth-Lewis method) in a rain-truncated tie and thrashed India in the final at Johannesburg by 91 runs, to lift the trophy for record third time. Australia broke West Indies s record, who won the opening two World Cup tournaments. Ricky Ponting s brilliant 140 adjudged him the Man of the Match in the final. Ponting was also the leading run-scorer. Brett Lee was the leading wicket-taker with 23 scalps.

Brazil were magical in FIFA World Cup 1994, as they had waited for 24 long years to stamp authority once again. Brazil finished on top again in the group stage.. They knocked out the hosts, United States of America (USA) by a goal in the pre-quarters, followed by a 3-2 win over the Netherlands in the quarter-final and a one-goal win over Sweden in the semi-final, before beating Italy 3-2 on penalties in the final after a goal-less regulation period and extra time. The journey in the knockout stages was a slim one, but nevertheless, Brazil pulled off fourth World Cup win. Legendary, Romario was the best player in the tournament.

The first decade of this millennium saw Australia having a dream run, as they maintained the same attitude, confidence and composure to win ICC Cricket World Cup 2007 in the Caribbean. They won the three group stage encounters, followed by seven wins in the super-eight stage. Australia later mauled South Africa in semi-final by seven wickets in a low-scoring tie and beat Sri Lanka in the final at Barbados by 53-runs (via D/L method) in a controversial rain-truncated tie, thus completing a hat-trick of World Cup wins. Adam Gilchrist s thunderous knock of 149 was the highlight of the final, while his fellow opening batsman, Matthew Hayden was the leading run-scorer, followed by Glenn McGrath as the leading wicket-taker and the Player of the Tournament with 26 scalps.

This was another heck of a tournament for Brazil and the most memorable of all, as it was this team, that re-wrote history in Brazilian football and took their game to the next level. With the tournament being held at North Korea and Japan, Brazil started off on a convincing note, with three group stage wins over Turkey, Costa Rica and China. In the pre-quarters, they comfortably beat Belgium 2-0, followed by a hard-fought 2-1 win over England and a one-goal win over Turkey in the semi-final again, before beating Germany 2-0, owing to a brilliant match-winning brace from Ronaldo, who also was the highest goal-scorer;. The match against Germany was predicted to be the toughest encounter for Brazil, owing to the brilliant form of Germany s greatest goalkeepers of all time, Oliver Kahn, who was also adjudged Player of the Tournament.

Australia too had a tough tournament this time. Being the co-hosts, they had a huge amount of pressure of winning.. Prior to the tournament, Australia were not being tipped as red-hot favourites . Being drawn against co-hosts, New Zealand in the same group, Australia were off to a flyer, losing just a game to New Zealand away at home and finishing second in the table. They beat Pakistan in quarter-final by six wickets in a low scoring tie at Adelaide, followed by an impressive 95-run win over the defending champions, India, in Sydney. However, the final against New Zealand at Melbourne more or less turned out to be a one-sided affair with New Zealand being bowled out for 183 and Australia, comfortably cruising to a seven-wicket win. Cricket World Cup finals XI: Players who were outstanding on the day of finals

Thus, going by the records and timeline, both Brazil and Australia have proven their worth and dominance in their respective sport. Their performances have drawn millions of fans from across the world and a lot is expected from these champion teams and there will be more expectations in future. It is now up to these teams to handle the pressure carefully from here on as it has been seen that Brazil are struggling in the grandest stage following the 2002 FIFA World Cup victory and have not won on the last three occasions. AUS vs NZ, ICC World Cup 2015 final: Melbourne streets bear calm look following Australian victory

Yet the same is to be tested for Australia as they will have their sights set on England, where they travel four years later to defend their fifth title and in pursuit for the sixth. So would be Brazil, who would eye the 2018 FIFA World Cup in Russia to grab their sixth title as well. Nevertheless, considering their track record, the tag-line Champions in Yellow is truly justified. Battered, bruised but not beaten, Clarke wins hearts with ICC World Cup 2015 triumph 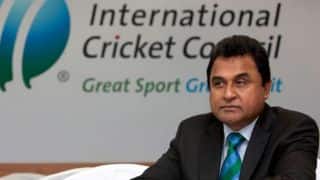