What if a ball gets buried in a batsman s shirt and six men rugby-tackle him?

Several stories about WG Grace are made up, but the Clifton College Close Ground incident of 1878 was true. Gloucestershire were playing Surrey, and a throw from a fielder lodged into Grace s shirt. By then Grace had already run three, and seizing the opportunity, he kept running. He ran three more singles, absolutely refusing to take the ball out of his shirt on the grounds that he might be given out handling the ball.

Obviously, this held little ground. The Surrey fielders eventually forced him to stop and extracted the ball. William Mortlock and Charles Pullin, the umpires, allowed him only three for no good reason but we will come to that.

Over six years after the incident, a match was played in Tocumwal, New South Wales, almost on the Victorian border. The local side was hosting Numurkah. The source of the incident is based on a report in Riverina Advertiser, dated January 6, 1885, so one can put an approximate date to it.

The match was going on peacefully (one can at least hope so) till a Numurkah batsman hit a ball that buried itself into the non-striker s shirt. The bowler, obviously realising an opportunity, made an attempt to catch the batsman. He held the non-striker tightly and made all possible efforts to excavate the ball as the poor batter tried to escape or, at least, ensure the ball dropped on the ground.

Now four other fielders rushed to the scenario and grabbed the batsman. The Tocumwal captain joined in as well. Surrounded and manhandled by six men, the non-striker failed to wriggle out, but it was clear that he was losing the battle.

The entire incident got even more complicated when a person left the pavilion and made his way towards the huddle . What followed was absolutely fantastic: A burly member of the team which was then batting, doubtless fired with the idea that his fellow-worker was being unjustly treated, was observed to rush with great force against the struggling mass, and placed the lot (himself on top) hors de combat. The scene would not have looked out of place in a rugby match.

The batsman finally rose, battered and bruised, when the dust cleared. His flannels had turned a dusty brown by then, but no one cared: the ball had, as expectedly dropped on the ground. Amidst all the confusion, someone appealed.

Spare a thought for the umpire, who had been watching all this. We will never know what went through his mind during the entire sequence of events, which were, in all probability, not what he had expected that morning. At this stage the appeal turned out to be too much for him: he gave the non-striker out handling the ball.

This was obviously a wrong decision, because even if one ignores all other rules the batsman had not touched the ball.

The Numurkah captain, annoyed by the decision, immediately left the match (and Tocumwal) without partaking of the hospitalities provided for them.

Tocumwal versus Numurkah might have been a minor match, but it was surprising that the laws were not altered for a long time. Finally, the 1899 Revision of the Laws of Cricket 1884 Code included a Law 33A: If the ball, whether struck with the bat or not, lodges in a batsman’s clothing, the ball shall become Dead .

Had it been coined earlier, the Numurkah cricketers would probably have had an excellent lunch.

Tocumwal probably beat Numurkah on a concession. One batsman was given out handling the ball. No other detail is known. 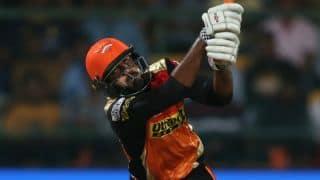