Ending the day on 236 for four, Bangladesh did well against Pakistan.

Bangladesh and Pakistan faced off in the first Test at the Sheikh Abu Naser Stadium, Khulna. On Day One, the Bangladesh batsmen did well and the Pakistan bowlers had their moments. Ayush Gupta analyses the day’s proceedings and reflects on the balance of power.

Bangladesh are over the moon after their historic 3-0 victory in the One-Day International (ODI) series against Pakistan. To add to their jubilation, they also won the one-off T20 International. ‘Banglawash’ is what the fans are calling this historic run! However, the two teams now don the white flannels and would know that Test cricket is a different ball-game. Pakistan are stronger now with the return of Misbah-ul-Haq and Younis Khan. Bangladesh would know that they need a new approach. READ: Bangladesh in strong position at the end of Day 1 of 1st Test against Pakistan

After winning the toss, Bangladesh skipper, Mushfiqur Rahim had no hesitation to bat first on what looked like a flat pitch. Bangladesh handed Test caps to Soumya Sarkar and Mohammad Shahid. On the other hand, the young Sami Aslam won his first Test for Pakistan.

As the play began, the openers were off to a slow, but steady start and were careful during the initial overs as they managed only 23 in the first 15 overs. The Bangladesh openers had done well to negotiate the first session, but at the stroke of lunch, Yasir Shah dismissed Tamim Iqbal, which gave Pakistan some optimism heading into the break. It was a session of attrition one would say. Pakistan would have wanted more breakthroughs, and Bangladesh were merely getting their eye in. READ: Mominul Haque joins elite list of batsmen

Post lunch, Bangladesh’s approach changed with Imrul Kayes and Mominul Haque playing positive cricket. They tried to push the score forward and move past the defensive phase. Imrul also scored his second Test half-century, but immediately thereafter, he was dismissed by Mohammed Hafeez.  Mominul and Mahmudullah batted quite sensibly thereafter and put up a 50-run stand as Bangladesh went into lunch at 150 for two.  There were a few opportunities Pakistan could have taken, but they failed to convert them. Bangladesh walked with the honours although their scoring rare was slow. READ: Bangladesh in a good position, believes Mominul Haque

In the evening session, Mominul and Mahmudullah stretched their partnership to 95, with the former completing his fifty. Mahmudullah had the same milestone in sight but was outsmarted by Wahab Riaz for 49.   There was another partnership that kept Pakistan at bay with Shakib Al Hasan joining Mominul. They were moving close to the end of day’s play when Mominulwas out leg-before for 80. It was quite unfortunate as had Mominl continued, Bangladesh would have been in a formidable position.

At 236 for four, this game is evenly poised one would say, although Bangladesh may have an edge over Pakistan. Bangladesh were patient through the day and although Pakistan bowled well, they failed to grab onto opportunities. A few chances that went by may also return to haunt them. Having said that, Pakistan would want to put pressure on Bangladesh early and wrap things up quickly. 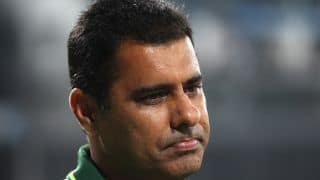 Waqar Younis not thinking about resigning as Pakistan head coach