Amol Muzumdar, one of the greatest Indian batsmen to have never played for the country, said a few months back in an exclusive interview to CricketCountry that the transition phase of two years would be tough for Indian cricket. 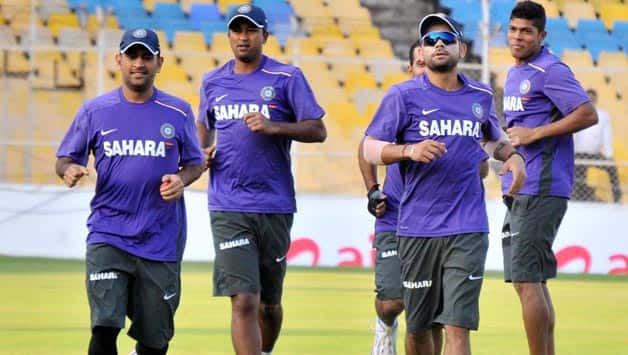 Given the pool of talent that is left unutilized, wouldn’t it be a bold and smart move to have three different teams for the three formats headed by different skippers, if the need be © PTI

‘Omnishambles’ was chosen as the word of the year 2012 by the Oxford University and as it seems, the Indian cricket team seems to have taken it too seriously and has made a concentrated effort to be in one, writes Aayush Puthran.

Amol Muzumdar, one of the greatest Indian batsmen to have never played for the country, said a few months back in an exclusive interview to CricketCountry that the transition phase of two years would be tough for Indian cricket. This writer recognised ‘tough’ as a situation where India would find it difficult to win matches abroad, but somehow find a way to wobble and crawl to victory at home. After all, England and Australia had to play some excellent quality cricket to beat India the way they did and Cheteshwar Pujara and Virat Kohli seemed able replacements for Rahul Dravid and VVS Laxman. However, the two consecutive thrashings at Wankhede and Eden Gardens just seemed to have given Muzumdar’s use of ‘tough’ more justified weight.

While the two back-to-back defeats, India’s first at home since 1999, was a harsh reality of their current state, the television commercial run by the broadcasting channel has not only made the slap harder but also caused enough embarrassment for the Indian cricket board to wake up to.

The Board of Control for Cricket in India’s (BCCI) questionable tactics of refusing to play spinners in England’s practice games and providing flat-tracks back-fired and so did the band and the bansuris. To believe that the English played quality cricket, the kind which was on display last summer at England, would be an over-statement. They seemed far more vulnerable this time. Barring Alastair Cook, the controversial Kevin Pietersen, Monty Panesar and, to an, extent Graeme Swann, England were troubled in the series.

At a macro level, there can be enough reasons and explanations for India’s defeat. Dhoni’s captaincy was too defensive, batsmen were playing loose shots, bowlers looked lost, Sachin’s reflexes have slowed down, England had one too many Cook(s) to spoil the broth, Prabir Mukherjee didn’t comply with the BCCI’s orders, etc. But, it isn’t too tough to realise that the defeats this time are a clear indication of a jaded outfit purely going through the motions of a hectic calendar.

While adapting to three different formats is a task tough enough, switching over every month just makes it worse. Given the pool of talent that is left unutilized, wouldn’t it be a bold and smart move to have three different teams for the three formats headed by different skippers, if the need be. Players like Ashok Dinda and Manoj Tiwary are practically cooling their heels across formats for no valid reason, watching their team play with the lost hunger. Former Indian skipper Sourav Ganguly also recently advocated the need for split captaincy.

The complete overhaul of the system is a must to ensure a long-term solution is in place rather than just sticking with short-term changes. India might still win at Nagpur and at best, follow it up with victories against Pakistan and Australia, which might overshadow everything. In order to stay away from the gloom of temporary joy and find a permanent solution that will ensure India’s success at the top across formats, the BCCI will have to soon wake up to the alarm bells and maybe have a neutral body study the situation and  recommend the required changes, on similar lines with the Don Argus review.