Kapil Dev's 5/28 at the MCG in 1981 gave India their third win on Australian soil and first drawn series there.

Virat Kohli s India take on hosts Australia from December 6 at Adelaide Oval in the first of four Tests across a blockbuster Australian summer. In the first part of our famous Indian performances in Australia flashback series, today we recap the third Test at the Melbourne Cricket Ground in 1981.

Defeats at the SCG and a draw in Adelaide left Sunil Gavaskar s team needing a win at the MCG to avoid another series defeat in Australia.

After being put in by Greg Chappell, India made 237 on the back of a superb 114 from Gundappa Vishwanath, following which the home side posted 419 with Allan Border getting 124 and gutsy knocks by Chappell (76) and Doug Walters (78). This left India to get 182 runs to avoid the follow-on.

Gavaskar and Chetan Chauhan played solidly to end the third day having reduced Australia’s lead of 182 by 108, and on the fourth they added another 57 before Gavaskar’s contentious lbw dismissal to Dennis Lillee on 70 that left him fuming and threatening a dramatic walk-out.

Up stepped Kapil Dev in one of of his best overseas performances, taking five wickets to bowl out Australia for 83 in 48.4 overs. He was carrying a niggle, and so could not bowl flat out fast, but Gavaskar managed to coax Kapil to have a bowl with Australia staring the final day on 24/3.

The two-paced MCG surface had a bit of bite and turn in it, and the wily Haryana allrounder maximised it while conjuring up a spell for the ages. Doshi claimed his second to have Kim Hughes bowled for 16 at 50/5 and then it was over to Kapil.

Bruce Yardley was bowled, Border nicked off to Syed Kirmani, Rodney Marsh and Lillee had their stumps splayed and the last wicket was Jim Higgs, lbw for zero in what proved the last of his 22 Test matches.

This marked India s third win on Australian soil and their first drawn series there. 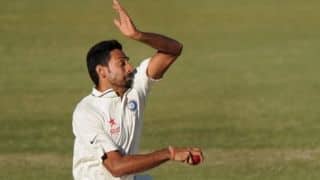