The Cricket Association of Nepal CEO expressed her excitement in an exclusive interview with CricketCountry.

The Nepal cricket team, gaining mileage with each passing day, are all set to face one of their biggest tests when they face the Pakistanis in a one-day match at Abu Dhabi in UAE. The sport, which has a major fan-following back home much like their South Asian neighbours, has suffered severe setbacks following the devastating earthquake in the country. The natural calamity, however, has clearly not stopped the Nepal team from striving hard in its endeavour to rise. Bhawana Ghimire, CEO of Cricket Association of Nepal (CAN), speaks to Amit Banerjee in an exclusive interview ahead of Nepal’s historic match against Pakistan, as well as on the other issues pertaining to the state of the gentleman’s sport in the former kingdom. LIVE CRICKET UPDATES: Pakistanis vs Nepal 2015, tour match at Abu Dhabi

CricketCountry (CC): Nepal are all set to play their first-ever game against Pakistan in the following month. How excited are you and the rest of the country for the big match?

Bhawana Ghimire (BG): This is probably one of the best chances for Nepal to showcase our brand of cricket, more specifically as an emerging associate nation; it will also warm up everyone. I obviously am pretty excited and hyped, as are the players and fans. READ: Nepal to face Pakistan in 50-over match in UAE

CC: Do you consider the one-off match as one of Nepal’s biggest in its international cricket history? If not, then which fixture would you give that status to?

BG: From the player’s perspective, every single match is important. In my opinion, after ICC T20 World Cup, this match will be a historic one.

CC: Has CAN discussed the likelihood of Nepal vs India encounters with BCCI lately? What are the chances of that happening?

BG: I think it is better to discuss or disclose the fixture after things get finalised.  Our dream and hard work will definitely welcome such opportunities in the near future. The ICC full members should also support emerging associate nations by organising more tours.

CC: MCC is touring Nepal next month. Nepal are also set to play their first ever match at Lord’s next year. How beneficial do you think MCC’s tour will be in unearthing local talent?

BG: Every cricketer who understands the spirit of cricket knows how important MCC is. If MCC is touring Nepal, which is more than 4,500 miles away, and playing against our local teams and senior national squad, our players are more than aware on how to outperform and impress with their talents.  We are very grateful to MCC for the opportunity and intend to establish a long term relationship with them. READ: Nepal to play first-ever match at Lords in July next year

CC: Pubudu Dassanayake has offered his resignation as Nepal coach following the conclusion of ICC World Cricket League Championship match against Papua New Guinea. How influential do you think Dassanayake’s reign has been on Nepal cricket? Also, who are the prospects in CAN’s mind for a successor?

BG: Unfortunately, we are yet to implement the culture of appointing successors, which is an area in which we intend to improve upon at the earliest.  As far as our head coach is concerned, I don’t have to explain much about Dassanayake’s contribution for Nepal’s cricket. He has been a great pilot for Nepal cricket. I hope my board will take a decision which is acceptable for all players and fans.

CC: The mountainous country of Nepal had suffered from a series of devastating earthquakes earlier this year, which caused the loss of thousands of lives and affected millions others, including cricketers and their families. How far has Nepal cricket moved on six months that have passed, and are there any major hurdles that CAN and the cricketers still face?

BG: Our players played during hard times and tackled all the challenges they faced. Our renovation on Tribhuvan University (TU) ground is in the final stage; however, the cricketers still practised on substandard grounds.  Increasing frequency of domestic tournaments in different formats is of utmost priority; we shouldn’t escape out of it. 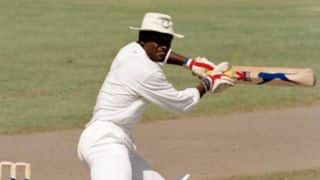