Bill O'Reilly masterminded the dismissal of Don Bradman, his own teammate!

June 12, 1948. Australia were in complete control of the match at the start of Day Three. They were 128 runs ahead with 6 wickets in hand, and Don Bradman was past his hundred. Then Alec Bedser followed Bill O’Reilly’s advice, and Bradman fell. Abhishek Mukherjee looks back at a Bradman dismissal masterminded by a fellow Australian.

It is certainly not news that Don Bradman and Bill O’Reilly did not look at each other in the eye. It is believed that the jovial, sociable Irish Catholic O’Reilly’s career came to a premature end in the era of the reserved, Protestant Bradman. “You have to play under a Protestant to know what it’s like,” said the man they called Tiger.

O’Reilly and his mate Jack Fingleton also reportedly burst into hysteric peals of laughter when Bradman was bowled by Eric Hollies for a duck in his last Test innings.

The feeling was mutual. Bradman’s emotions towards O’Reilly and Fingleton were clear. He wrote in 1995: “With these fellows out of the way, the loyalty of my 1948 side was a big joy and made a big contribution to the outstanding success of that tour.”

But then, both men had immense professional respect for each other. O’Reilly went on public, mentioning that Greg Chappell and Allan Border were “child’s play” compared to Bradman. He also refused to divulge exactly what he felt about The Don: “You don’t piss on statues.”

Before Bradman passed away, he had disclosed an XI of his favourite cricketers in the pre-2000 period to Roland Perry. When Bradman’s Best came out, O’Reilly’s name was there.

The Invincibles steamrolled over one side after another en route to the first Test at Trent Bridge: Worcestershire, Leicestershire, Surrey, Cambridge, Essex, Oxford, MCC, and Sussex were beaten by an innings; Hampshire, by 8 wickets; Yorkshire put up a solid fight before going down by 4 wickets; and rain saved Lancashire and Nottinghamshire. READ: Keith Miller helps Invincibles survive Yorkshire scare at Bradford

Ray Lindwall claimed Cyril Washbrook early. Unfortunately, he injured his groin after sending down 13 overs and bowled no further in the Test. Keith Miller and Bill Johnston stepped up with the new ball, supported by the spin of Ian Johnson and Ernie Toshack.

England were reduced to 74 for 8 before Jim Laker counterattacked, adding 89 at a run a minute with Alec Bedser. Laker was last out on 165. He had scored 63, which would remain his career-best. Miller finished with 3 for 38, and Johnston, 5 for 36.

The light was not at its best when Sid Barnes and Arthur Morris walked out that afternoon. Bill Edrich bowled the first ball, a wide; Barnes immediately walked up to Frank Chester and made an appeal that left the legendary umpire scandalised: “Eh, the light!”

Barnes and Morris added 73 for the opening stand before the latter was bowled by Laker. Out walked Bradman. Australia reached 121 for 1 before Barnes fell to Laker; without another run being added, Laker bowled three off-breaks to Miller before moving one away: Miller was caught at slip by Edrich.

Norman Yardley bowled an off-cutter to trap Bill Brown leg-before, and resorted to the leg-trap against Bradman. He came round the wicket and cut down the strokes, packing the leg-side with fielders. Bradman remained scoreless for 15 minutes before tea, which led to the unthinkable: he was barracked for slow batting.

He eventually reached his hundred from 218 minutes. Australia were 293 for 4 (with a lead of 128) at stumps, with Bradman on 130 and Lindsay Hassett on 41. Australia had batted England out of the Test. Well, almost.

O’Reilly had taken to journalism, and was covering the tour along with Fingleton, Arthur Mailey, and others from Australia. O’Reilly sought out Alec Bedser, who had been able to keep Bradman on a leash of sorts through the day. Bedser thanked him following the inevitable compliments.

Then O’Reilly added: “I can’t say I agree with the placing of your leg-side field.” Bedser, forever eager for tips, acquired paper and a pencil.

Few were as equipped as O’Reilly when it came to bowling on the pads and the leg-stump. He had also observed Bradman bat for a couple of decades. He laid out a plan, marking out specifically the spots where he needed fielders on the leg for Bradman.

Len Hutton had spent the previous day fielding at leg-slip. This morning Bedser placed him at fine-leg. There was also a pair of short-legs and a mid-on. Bradman started with a brace that took him to a thousand runs that English summer. Yes, he was the fastest despite missing matches. Soon afterwards, he unleashed a gorgeous cover-drive off Bedser for four.

The next ball was a leg-glance. Fingleton recalled the outcome in Brightly Fades the Don: “There was Hutton waiting for it. Hutton did not have to move an inch — and how the crowd roared! Bedser, grinning hugely, gave a wave of appreciation to O’Reilly in the far-off Press-box!”

Bradman walked back for 138. In a way O’Reilly’s act was similar to Mailey’s, who had taught Ian Peebles to grip while bowling the googly. When confronted by the manager, Mailey responded: “Cricket is like art. It is international.” Mailey went on to show Peebles his grip for the leg-break as well.

Years later, Bishan Bedi would do the same, giving hours of batting practice to Tony Greig and Alan Knott. The generosity would backfire, as India went on to lose the Test and the series, and Bedi took serious flak.

England put up a fight after being 39 for 2. Hutton (74) added 111 with Denis Compton, who then went on to add another 93 with Joe Hardstaff jr (43), 57 with Yardley, and 84 with Godfrey Evans (50). Compton eventually tried to hook Miller, and almost sat on the stumps before falling in a heap.

Johnston and Miller sent down 103 overs between them in the absence of Lindwall, claiming four wickets apiece. Johnston returned match figures of 9 for 183 and Miller, 7 for 163. Australia needed 98.

Barnes started in furious style, taking 13 off Bedser’s first over. Bedser removed Morris, which brought Bradman to the crease. Once again Bedser had Hutton at fine-leg. Once again he bowled on leg. Once again Bradman leg-glanced. Once again he was caught by Hutton. 48 for 2. It was Bradman’s first Test duck on English soil. He would score another — perhaps the most famous duck in the history of Test cricket.

Barnes finished things off in a hurry, remaining unbeaten on 64 with Hassett for company. There was some hilarity when Barnes rushed off with the stumps with still a run to get. He had to return, and when the winning run was eventually scored, Barnes could not acquire so much as a bail.

– In the next Test at Lord’s, Bradman was dropped by Hutton at the same place off Bedser on 13. Shortly afterwards he fell for 47 — caught Hutton at fine-leg off Bedser. He grew wary of the leg-trap off Bedser’s bowling in the second innings and reached 89. Bedser, the smart bowler he was, surprised Bradman by swinging one away from him; Bradman edged, and Edrich took the catch at slip.

– Australia won the Test series 4-0 and remained unbeaten through the tour. 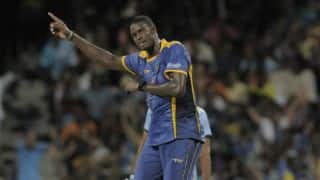 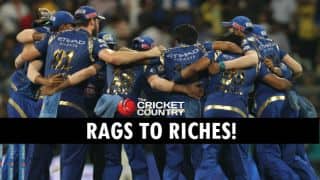