A look at the day 'The Invincibles' were saved from a defeat by one Keith Miller.

May 6, 1948. The Invincibles juggernaut came against a severe jolt at Bradford against the medium-paced bowling of Frank Smailes. Abhishek Mukherjee looks back at the closest The Invincibles came to a defeat on the 1948 tour.

The greatest team of all time? Debatable. What is not debatable, however, is the single-minded ruthless hunger with which Don Bradman’s men decimated the Englishmen throughout the 1948 tour of England.

Scheduled to play 112 days in a 144-day tour (five-and-a-half days a week excluding travel by train — significantly more than what some of the current stars play), the Australians steamrolled over one opposition after another.

They played 34 matches in all, winning 25 (16 by an innings) and drawing 9. Of these, 31 were First-Class matches, in which they won 23 and drew 8. The five-Test Ashes, too, was a 4-0 affair. It was for a reason that they were called The Invincibles.

Post-War England was not the same as the country the Australians had visited a decade back. There was, however, a lot of excitement over the tour. Not only was it the first major Test series in England since World War II, but it was Bradman’s last series as well.

The Australians began the tour in style. Worcestershire were blown away in the conventional tour opener at New Road. Having amassed 236, 206, and 258 in his three outings at the ground, Bradman got adventurous and “failed”, scoring a “mere” 107.

Earlier, the hosts had been bowled out for 233. Arthur Morris beat Bradman in the race to the hundred; batting at No. 9, Keith Miller hit the poor bowlers everywhere; and up against a 229-run lead, Worcestershire were bowled out for 212 by Colin McCool and Ian Johnson.

Bradman’s performance went a notch lower against Leicestershire at Grace Road. It did not matter, for Miller bludgeoned his way to a spectacular 202. Up against 448, the hosts were bowled out for 130 by Doug Ring (5 for 45) and 147 by Johnson (a career-best 7 for 42).

Despite everything, they probably knew that Bradford would not be a pushover — for it was Yorkshire, and to Yorkshiremen cricket meant nothing short of war. Even the average spectator at Headingley or Bramall Lane or Bradford hated to lose as much as Bradman himself did.

Throughout the tour, Bradman used a rotation policy. Morris, Sid Barnes, and Bill Brown were rotated at the top. The middle-order was shuffled around. Bradman himself skipped nine matches, where Lindsay Hassett stood in as captain. Don Tallon and Ron Saggers shared duties behind the stumps. READ: Ron Saggers, the second wicketkeeper of the 1948 invincibles

In an effort to keep Ray Lindwall and Miller fresh for the Tests, Bradman used Bill Johnston and Ernie Toshack (before the latter broke down) abundantly in the tour matches. The flat pitches meant that the spinners did not play a major role in the Tests, but Johnson, McCool, and Ring were used sparingly in the tour games.

It was brutally cold. Jack Fingleton wrote in Brightly Fades the Don: “This was the coldest day, surely, that cricket has ever known. The sunshine came in watery, rationed patches and a chill wind froze us in our open-air seats. I swear I once saw snow. Players jumped up and down on the field and swung their arms and kicked their legs to keep warm, and not even the effort of the civic authorities in playing ‘Waltzing Matilda’ on the carillon could warm the Australians.”

The conditions were overcast. There was rain in the air. Australia decided to go in with all three frontline seamers — Lindwall, Miller, and Johnston. It was a fair call, for Johnston had been rested at New Road, and both Lindwall and Miller were left out at Grace Road.

Barnes was also rested, but more importantly, Bradman decided to opt out of the match. He later wrote in A Farewell to Cricket: “Things were now swinging along quite smoothly, so I decided to rest for the Yorkshire match at Bradford.”

Bradman’s omission may have been a source of disappointment for the spectators, but almost certainly less than what would have been for any other county: there was, after all, a Yorkshire match.

Contrary to expectations, Brian Sellers chose to bat. He had perhaps counted on Len Hutton to put up a resistance. Hutton scored the first run amidst tumultuous cheer, but took about 30 minutes to score his second run.

The opening pair added 21, but a triple-blow reduced the hosts to 22 for 3. Runs dried up thereafter, and Yorkshire meandered along. They went to tea with a mere 38 for 3, for little play was possible in the first two sessions due to rain. Wickets kept falling at regular intervals, and Yorkshire were shot out for 71.

Both Miller and Loxton were resorted to bowl seam with the new ball and spin with the old. Miller, with six for 54, was the wrecker-in-chief. Johnston finished with remarkable figures of 26-14-22-4.

Lindwall got a mere four overs. McCool was not called upon. But more importantly, Sam Loxton, having summoned first-change, bowled a single over; he strained his groin in an effort to bowl faster, and took no further part in the match.

Bradman later wrote of the injury: “This left Australia a batsman and a bowler short — a fact not to be overlooked when the closeness of the match is being re-lived.” He was probably right, but even a ten-man Australian side should not have sweated to beat a county side.

The Australian response was similar. Sellers introduced Frank Smailes after Ron Aspinall and Alec Coxon sent down a couple of overs each. Morris and Brown added 24 for the opening stand. Then Smailes, bowling his medium-pace, took out Brown, Hassett, and Brown.

With Neil Harvey also falling cheaply, the Australians were left reeling at 38 for 4 at stumps. They were still 33 runs behind, and were missing Loxton.

Miller joined Ron Hammence next morning, and decided to go for it from the very onset. The pair added a crucial 36, probably worth a couple of hundreds on a batting track before Smailes removed both men. Miller’s innings was special in particular: nobody in the match came remotely close to his 34.

Johnny Wardle, that erratic genius who could bowl both orthodox and Chinamen, claimed two wickets. The mighty Australians had been shot out for 101. The lead was a mere 30.

This time Lindwall got new ball, but was once again restricted to five overs. As many as four Yorkshiremen reached double-figures, Sellers himself top-scoring with 21 before becoming Lindwall’s only wicket. Tallon had a miserable day behind the stumps, conceding 11 byes.

It started with Brown, who shouldered arms to Smailes. The ball hit the pads. The umpire had no hesitation. 4 for 1.

Smailes found his rhythm going. Soon afterwards, Morris was caught in the leg-trap by Hutton. 5 for 2.

Hassett joined Miller, undoubtedly the hero of the match till then. The crowd had grown to 10,000, and they appealed in unison. Miller survived, but eventually he decided to take it on: in an attempt to clear long-off against Wardle, he holed out to Harry Halliday on the fence. 13 for 3.

Hassett looked tense. He had evaded the pair, but looked “dicky”. Hammence was the next man. He walked down the pitch and patted it as he waited for Hammence to join him. There was a minor banter with Sellers. Hassett grinned. The match continued.

The score reached 20 when Hammence was slow in responding to Hassett’s call and fell short of his ground. 20 for 4.

Then Smailes bowled a slightly short one. Hassett went for the pull, but the ball hurried on to him. Hassett tried to pull it, but in vain; Sellers called for it and caught it easily. 20 for 5. They needed another 40. Loxton would not bat. Yorkshire were back in the match.

The onus fell on Harvey and McCool. Harvey got off the mark, and then tried to flick one; Hutton, placed at short-leg (there were two short-legs) for exactly that shot, grassed it. Thus reprieved, Harvey swept the next ball for four. The drop would cost Yorkshire dearly.

Then Wardle bowled a rank long-hop. McCool, perhaps taken in by surprise, could only hit it back to Wardle. 31 for 6.

Tallon walked out, accompanied by a mongrel. The sun was out as well. The needed another 29. Fingleton wrote: “Afar off across the field I could see Lindwall in the dressing-room as he swung the bat in preparation or in letting off some nervous tension.” He and Johnston (who never reached 40 in First-Class cricket) were the only ones left.

Tallon was struck on the pads, and up they went in unison — bowlers, fielders, and spectators — but the appeal was turned down. Wardle lost control of the ball for a while after that, and Tallon helped himself to a four. Shortly afterwards Tallon tried an encore, and the ball fell agonisingly short of a fielder.

Australia went to tea at 47 for 6. Unfortunately, the final session of Day Two turned out to be an anticlimax. Neither Smailes nor Wright looked threatening, and runs piled up.

Harvey reached 12, and stepped out against Smailes to finish things off. Unfortunately, Don Brennan missed the ball completely. A stumping might have turned the match.

Harvey, the “baby of the side”, did not take long after that. He finished things off by lofting Smailes into the pavilion. Australia scraped home by 4 wickets.

– Australia were remotely stretched in only one more match on the tour — against Hampshire at Southampton. After Johnston restricted the hosts to 195, the tourists were bowled out for 117. Unfortunately, Hampshire were skittled out for 103, Brown and Johnson added 105 for the second wicket to seal an 8-wicket victory.

– Bradman indeed play the second match against Yorkshire at Bramall Lane, scoring 54 and 86. The match ended in a draw after Bradman set the hosts 329 and they finished on 85 for 4 on an interrupted third day.

– Though Lindwall and Miller shared the spoils, Johnston sent down the most deliveries (5,107; a thousand more than anyone else), and finished with most wickets (102). 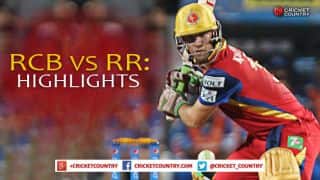