Ron Saggers spent his career as understudy to Don Tallon.

Ron Saggers, born May 15, 1917, was an excellent wicketkeeper, whose career coincided with two eclipsing phenomena — Second World War and Don Tallon. Arunabha Sengupta looks back at the life and career of the man who did not get too many chances to play for Australia, but could be always relied upon to step in whenever required as a world-class performer.

Apprentice to an Invincible

He perhaps did not quite make the Invincible grade. Apprentice to an Invincible? That would probably be more accurate. But New South Welshman Ron Saggers was a superb wicketkeeper in his own right.

He played just one Test during that incredible Australian tour of England in 1948, but what a Test it was! The great Don Tallon crouched behind the stumps in most of the matches, was injured before the Leeds Test. Saggers, not quite the young debutant at the age of 31, nevertheless played his first Test for Australia.

He caught Denis Compton off Ray Lindwall, and with that grandest of victims registered himself in the scoreboard for the first time. He jumped out to Jim Laker to be stumped by his illustrious counterpart Godfrey Evans. He kept quite beautifully in the second innings, as England set a fourth innings staggering 404-run fourth innings target. And then he sat in the pavilion as Arthur Morris and Don Bradman put together that famous partnership and Australia ended victorious by 7 wickets.

At The Oval, Tallon returned, and flew to his left to catch a Len Hutton leg-glance off Lindwall, dismissing the batsman for 30, a great, great innings scored out of 52. That incredible catch told the story of the career of Saggers. He remained the understudy of brilliance, the impeccable Tallon, Bradman’s favourite wicketkeeper. Saggers was a keeper with two ideal qualities of being tidy and unobtrusive. However he lost out, to a top-notch contemporary, and the Second World War which scooped out six of the 12 years he was at the peak.

From batter to keeper

Born in the Sydney suburb of Marrickville, Saggers played for New South Wales (NSW) Colts twice in 1937 – each time against the Queensland Colts. Two seasons later, he made his First-Class debut, playing against South Australia. Strangely for a man who never quite made his mark with the willow, he played his first match as a specialist batsman and batted at No. 6. Stan Sismey kept the wickets for the side.

In that game against Bradman’s South Australians, Saggers formed the lower end of a fabulous middle-order comprising of captain Stan McCabe, Sidney Barnes and Arthur Chipperfield. He scored 45 and 57 against a spin attack of Clarrie Grimmett and Frank Ward. In his second match he again played as a batsman and scored 71 against Victoria in the second innings against another double spin attack — Ian Johnson and Chuck Fleetwood-Smith.

It was while playing for the Rest against NSW in his third match that he donned the big gloves for the first time.

When the next season started, Saggers became the regular keeper, making three stumpings against Queensland in the first match, all effected off Colin McCool. With McCool and Bill O’Reilly bowling for NSW, the young man had his work cut out behind the stumps, and impressed one and all. He played a few useful innings as well, with a highest of 63 against South Australia. It was the last season before War intervened, and Saggers caught 18 and stumped 13.

Saggers worked in the insurance business and got married in 1941. However, soon after his wedding he enlisted in the Royal Australian Air Force and served at the Elementary Flight School for nearly eight months. Leading Aircraftman RA Saggers 421043 was discharged in July 1942.

After the War, his glove-work remained as excellent as ever, but his bat could not quite recapture the earlier form. However, he took the thunderbolts of Ray Lindwall and Keith Miller with as much ease and composure, as he had shown while keeping to the spin of O’Reilly and McCool.

His bat did talk occasionally. In December 1947 that he hit 90 from No 9 against the South Australian attack. Towards the end of that season when Arthur Morris was unavailable, Saggers also led NSW in a couple of matches.When Australia travelled to England, Saggers was the preferred choice as the second wicketkeeper.

Although Tallon remained the first choice of Bradman and Australia, Saggers did make his way into two historic matches. In the early part of the tour, Australia took on Essex and piled up 721 in a day. Saggers came in at 498 for 5 and batted till the end, hammering an unbeaten 104, adding 166 runs in an hour-and-five-minutes with Sam Loxton. It remained his only century in First-Class cricket. The second great game was of course the Test match at Headingley.

In between he stumped 4 men in the second innings against Surrey, 3 off McCool and one off Ernie Toshack. He ended the tour with 209 runs at 23.22, 23 catches and 20 stumpings.

Coming back to Australia, Saggers was in fine form behind the stumps. And when Tallon was unavailable for the South African tour, he was chosen as the wicketkeeper for Australia. The series was won 4-0, and Saggers played all five Tests holding 13 catches and making eight stumpings.

However, after his return from the tour, he played just one more First-Class match. Tallon was back when the Ashes was played in Australia and Saggers retired from the game.

Saggers ended his six-Test career with 16 catches and eight stumpings, although his tally of runs was just 30 at 10.00.In 77 First-Class matches, he scored 1888 runs at 23.89 with that century against Essex and eight other half-centuries for NSW. He caught 146, and his 75 stumpings alongside it was unusually high.

Unusually tall for a wicketkeeper, Saggers was always reliable and went through his actions with minimum fuss. Bradman remembered him in A Farewell to Cricket with the words, “[Saggers] had not quite the speed or agility of Tallon but could always be relied on for a solid performance. A most polished and unostentatious player.”

Apart from his cricketing merits, Saggers was also known for his some quick and innovative thinking. It was he who suggested to Jack Moroney to reduce his age by three years while filling up his state registration form, helping NSW batsman revive his career after the Second World War.

Saggers passed away in Harbord, New South Wales in 1987. 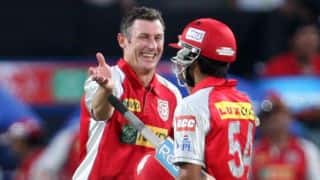 IPL 7: I will be a middle-order player for CSK, says David Hussey