Brett Lee – one of the legends of the modern cricket with licence to thrill - has bid adieu to international cricket. In the world-beating Australian side of the 2000s, Lee was a crucial component and played a significant role in their domination. 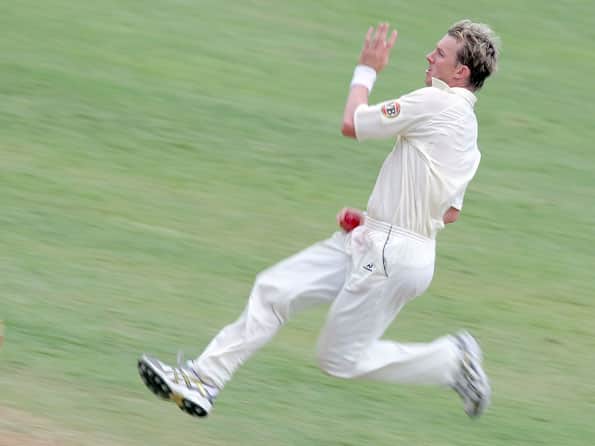 Brett Lee – one of the legends of the modern cricket with licence to thrill – has bid adieu to international cricket. In the world-beating Australian side of the 2000s, Lee was a crucial component and played a significant role in their domination. A charming personality off the field, he was immensely popular with the fans – particularly in the subcontinent. His announcement has certainly broken a number of hearts – especially the females.

Lee had one of the most magnificent and rhythmic run-ups; it had the grace and speed of a bullet train. His pace made him one of the most feared bowlers in the game and the numbers he logged in assures him a place among the greatest in cricket’s history. In the longer version, Lee was a thunderous force that supported the great Glenn McGrath and Jason Gillespie.

He burst on to the scene in December 1999 with a five-wicket haul against India in the Boxing Day Test match and gradually established himself in the Australian ranks. Once McGrath called it a day, Lee led the attack in an Australian team that was in transition. Unfortunately, injuries took its toll on his body and the Boxing Day Test of 2008 against South Africa was his last. There was an attempt at a comeback in whites during Ashes 2009, but another niggle dashed those hopes.

While Lee had fantastic numbers in Test cricket, it is his one-day record that is enviable. He was a genuine wicket-taker and could deliver breakthroughs upfront. Ricky Ponting would often turn to him to dent the opposition’s charge. Lee’s blinding pace, coupled with disciplined line, was always tough to negotiate in one-day games when batsmen were looking to score briskly. There may have been occasions when he was expensive, but a career economy rate of 4.76 in modern one-day cricket indicates that he consistently maintained good discipline.

In February, Lee had declared his intentions of playing through pain as Glenn McGrath’s record of most wickets by an Australian in ODIs was in sight. At that stage, Lee had played 42 games lesser than McGrath and trailed by only 20 wickets. Unfortunately, he has fallen an agonising wicket short of equalling his great compatriot’s feat of 381 ODI scalps. In a week where Mark Boucher was forced to quit a dismissal short of 1000 international victims, Lee’s fate also comes as a cruel blow. The scenario is almost similar to Mark Taylor declaring the innings when he had equaled Don Bradman’s highest score of 334 not out.

Lee’s retirement puts a number of arguments in perspective. The calf-injury against England at Durham has pushed him to take the call, but he could have pursued the record had he wanted. His statements echo the feelings of a genuine team man who placed the unit above his personal cause. He didn’t feel that he could go out there give his 100 % and pointed out that it wouldn’t have been fair to his team-mates. It speaks a lot of the Australian culture – one that instills core team values and the philosophy of ‘one for all, all for one.’

Lee’s career record of 14 four-wicket hauls and nine fivers is clearly better than McGrath’s. The question is: Where does he stand on the world stage in this respect?

Muralitharan and Waqar have played many more matches when compared to Lee, but the Australian’s match hauls are close to the two greats. It reflects the kind of wicket-taking force he was in one-day cricket.

The other interesting fact is that Lee is the fastest to 300 ODI wickets. It took him only 171 games to overhaul the milestone, 15 matches lesser than the second best Waqar. Interestingly, Lee was the second fastest 250, 200 and 150 ODI wickets. Saqlain Mushtaq beat him for those milestones on all the occasions – although the Australian did manage to come close on a few. Even in the list of the fastest to 100 ODI wickets, the competition was neck and neck as Saqlain managed it in 53 games, whereas Lee completed it in 55. Shane Bond was second on that list as he completed the said feat in 54 outings.

For bowlers who have taken over 200 wickets, Lee has the best strike-rate. Here is the said list:

For a change, Lee has beaten Saqlain in this list by a clear one point. While the bowling average reflects the wickets for the runs conceded, the strike-rate is a very pertinent indicator in ODIs. What this tells us is that on an average in a ten over spell, Lee would strike twice.

While Lee would continue to hone his skills at the Indian Premier League (IPL) and the Big Bash League (BBL), the international game would certainly miss him. Never again would he run in with grace and delivering thunderbolts in the green and gold of Australia. His millions of fans around the world would be asking the question: What next? Will he take his singing career to the next level? Or is a transition into the commentary box on the cards? It is anybody’s guess.