Hurricanes will need to name a strong playing eleven to take on the mighty South African outfit.

South African side Cape Cobras take on the Australian side Hobart Hurricanes in the sixth match of the ongoing Champions League T20 (CLT20) 2014 on Sunday. Devarchit Varma lists down the likely playing XI for the Big Bash League (BBL) side.

Having lost their opening match in the CLT20 2014 tournament to the local side Kings XI Punjab (KXIP) in an emphatic manner, by five wickets at the Punjab Cricket Association (PCA) Stadium in Mohali, Hobart Hurricanes will now be looking to make amends and bounce back after the disappointing loss. Hurricanes will need to win their second tie, on Saturday against the Cape Cobras, in order to stay alive in the tournament.

While they might be coming off from a loss, the Hurricanes should draw confidence from the fact that they have played one match compared to their opponents in this tournament, and they would be having some idea about the slow and turning Indian tracks compared to their opponents. However, the Hurricanes will need to name a strong playing eleven to take on the mighty South African outfit. While they did lose their first match, it will be important for Hobart to back the playing XI which they had selected. Let’s take a look at the likely playing eleven for Hobart Hurricanes:

Ben Dunk: The explosive left-hander is one of the most feared T20 batsmen in the Australian domestic circuit and Dunk would be raring to put up another strong score after a successful outing in the first match against Kings XI Punjab. Hobart will hope that Dunk makes most of the form that he displayed in the first game.

Tim Paine: He might have disappeared from the contention for a spot in the national side but Paine would aim to make most of the chances today. He did not look comfortable enough with the bat in the middle but Paine would be eager to put behind the disappointment.

Aiden Blizzard: The Hurricanes batsman scored 27 in the match against KXIP and the Australian side would be hoping that Blizzard, who has a fair amount of experience having played in the Indian Premier League (IPL) for the Mumbai Indians. Blizzard is one of the batting mainstays for the Hurricanes.

Shoaib Malik: In the absence of the likes of George Bailey, the Pakistan all-rounder is one of the key players for the BBL side. Malik has ample amount of experience in the T20 leagues around the world and his abilities to judge a match situation should be handy for the Hurricanes. Malik, who hails from the subcontinent, would be expected to lead the way with the bat.

Travis Birt: Birt scored a quickfire 28 in the game against Punjab and Hobart Hurricanes will hope that their star all-rounder delivers the good in this key clash.

Jonathan Wells: The 26-year-oldwas instrumental in buliding a 52-runs partnership with Birt and helped the Hurricanes to recover from the early debacle. He can be a key all-rounder and a valuable player lower down the over, someone who can hit the ball long way out of the park with a strike rate in excess of 118.

Ben Hilfenhaus: One wonders why he has gone missing from the national reckoning. Having enough experience in international cricket, especially in India as he played for Chennai Super Kings (CSK) in couple of seasons. Hilfenhaus has the ability to bowl tight line and his outswingers can trouble the batsmen upfront, something that is a must in T20 cricket.

Cameron Boyce: With an economy of eight, Hobart Hurricanes would pray that their leg-break bowler makes most of the slow and turning tracks in India. Boyce is an unknown face, but Hobart will need slow bowlers in their ranks to match the playing conditions.

Ben Laughlin: The Hobart Hurricanes squad is full of fast bowlers and Laughlin is one among them. He can generate good pace and lateral movements off the deck. He has decent experience in the format and has even played five One-Day Internationals (ODIs) for Australia.

Doug Bollinger: Another pacer who has good experience of Indian conditions, having played in the IPL with Chennai Super Kings. Bollinger can be really impressive with his line and length. 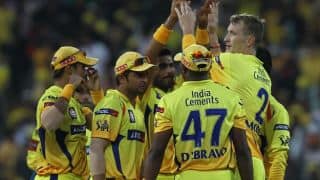