10 exciting talents whose progress through CLT20 2014 should be observed.

Ahead of the  major draw of the Champions League T20 (CLT20) 2014 between Kolkata Knight Riders (KKR) and Chennai Super Kings (CSK), Shiamak Unwalla looks at the top 10 young players to keep an eye on. These youngsters may not be the most experienced but they are exciting talents whose progress through the tournament should be observed.

1. Mitchell Marsh, Perth Scorchers: Undoubtedly one of the most exciting all-rounders of the tournament, Mitchell Marsh made a name for himself with consistent performances in domestic cricket. Selected in Australia’s squad for the Zimbabwe Triangular Series 2014, Marsh came up with breakthrough performances, especially against Dale Steyn in Australia’s penultimate game where he hit the pace bowling maestro for three sixes in three balls. He has the ability to surprise batsmen with his deceptive pace and bounce while bowling his steady medium pacers.

2. Ashton Agar, Perth Scorchers: After scoring 98 at No 11 on Test debut, Ashton Agar was earmarked for great things in the future. His steady left-arm spinners might not have caused uproar in the Ashes 2013, but he has the potential to be one for the future for Perth and Australia.

3. Dane Piedt, Cape Cobras: Not very much has been seen of Dane Piedt, but by all accounts of those who have seen him, he is an exciting off-spinner with numerous variations which he isn’t averse to using. He recently made his Test debut and performed well enough to be a sure consideration for future South African tours. If he can make an impact in CLT20, he could well seal the deal for an ODI call-up in good time.

4. Jonathan Vandiar, Dolphins: Much has been heard and written about the obvious talent of Jonathan Vandiar. Those who have seen him bat can attest to his ability, but a lack of consistency has plagued him for most of his career. His figures in domestic T20 is far from ideal, but with the right motivation, Vandiar could be a force to be reckoned with.

5. Saad Nasim, Lahore Lions: The right-handed all-rounder from Lahore scored a face-saving 58 in a total of 98 against Northern Knights. Nasim is also a leg-break bowler who can be a tough competitor on his day. He has the potential to be an explosive player for the Lions.

6. Manan Vohra, Kings XI Punjab (KXIP): When Manan Vohra was retained by KXIP during IPL 2014, a lot of people were shocked. Then he played a couple of absolute gems to vindicate his selection. An explosive opener, Vohra announced himself by outdoing no less a batsman than Virender Sehwag in terms of strike rate for KXIP. He will undoubtedly be one player whose career will be followed closely by a lot of people.

7. Joe Mennie, Hobart Hurricanes: Joe Mennie is not the most experienced cricketer, but his numbers back up what promises to be an exciting career. In only 19 First-Class games, the pacer has already captured 75 wickets at 25.85. This is T20, however, which is a completely different ball game. If his numbers are anything to go by, he should certainly make for interesting viewing.

8. Kuldeep Yadav, Kolkata Knight Riders (KKR): Kuldeep Yadav is one of the most exciting young spinners to appear in India’s junior cricket in recent times. He was India’s go-to bowler in the ICC Under-19 World Cup 2014, frequently striking whenever he was needed the most. The left-arm chinaman has a knack of picking up wickets, and while control is understandably not his strong suit, if given an opportunity, he has the capabilities to pull off a few surprises.

9. Ashley Nurse, Barbados Tridents: One of the few bowlers to have taken two domestic T20 fifers, Ashley Nurse is a tall West Indian off-spinner who has been knocking at the doors of an international selection for quite some time now. With 53 wickets in 49 T20s at an astonishing average of 15.79 and wonderful strike rate of just 15, Nurse will be a key player for the Tridents. Who knows, if he puts in a good enough performance here, an international recall could be just ‘round the corner.

10. Ish Sodhi, Northern Knights: The right-arm leg-spinner has been a steady customer for New Zealand since his debut in 2013. Like most leg-spinners, he tends to go for a few runs, but he makes up for it by getting batsmen out. At 21, he is among the youngest cricketers in CLT20 2014, but he already has international experience behind him, which will make him an interesting prospect for the remaining matches. 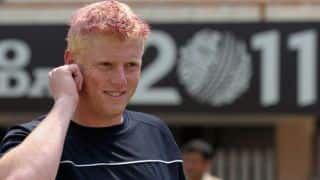 Kevin O'Brien: Ireland will look to adjust to conditions in Australia-New Zealand ahead of ICC World Cup 2015