Debutant No 11 Ashton Agar missed out on a memorable century on debut, being dismissed for 98, as Australia were bowled out for 280 in their first innings on Day Two of the first Test of The Ashes 2013. Mitchell Starc then struck twice in an over to reduce England to 11 for two at tea. 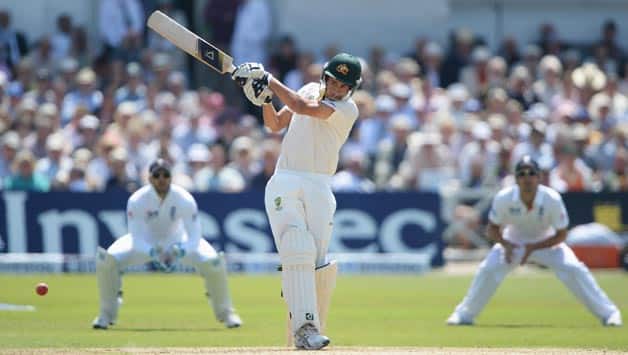 Debutant No 11 batsman Ashton Agar missed out on a memorable century on debut, after he was dismissed for 98, as Australia were bowled out for 280 in their first innings on Day Two of the first Test of The Ashes 2013. Mitchell Starc then struck twice in an over to reduce England to 11 for two at tea.

Agar, however, broke the world record of the highest score by a No 11 batsman — Tino Best’s 95 — as he helped Australia take a previously inconceivable lead of 65 runs.

Earlier, James Anderson took five wickets, before Agar had to break records one after the other to rescue Australia, who took lunch on Day Two at 229 for nine, after being 117 for nine at one stage.

Anderson added to the two wickets he took on Wednesday as he ripped through the Australian middle and lower order in the morning session of the second day. Caught Prior, bowled Anderson, became the order of the session as the Australian batsmen managed to find the edges of their blade with nagging regularity.

It was a bright, sunny day in Nottingham, quite unlike the first day which was overcast. But Anderson still managed to generate reverse swing enough to leave the Australians clueless.

Steven Smith, unbeaten on 38 overnight, had earlier provided Australia with a positive start and was looking extremely confident with his stroke-making. He added a couple more boundaries to his tally, reached his fourth Test half-century and looked set to carry his team past their deficit, only for Anderson to run in and find his edge on 53.

From here, there was no turning back as Australia collapsed from 108 for four to 117 for nine, thanks to Anderson and Graeme Swann. Or was there? Agar, the debutant at No 11, certainly thought there was. Along with Hughes, Agar wrested the game away from the hosts as the duo brought up their 100-run partnership at just under a run-a-ball.

Agar played like a seasoned pro and made proficient use of a consistent line of shot-pitched bowling from the Englishmen, Steven Finn in particular. The pulls, the cuts and the drives were were a delight to watch and you couldn’t believe this was a No 11 at play. Agar brought up his half-century — the first ever by a debutant No 11 — at a run-a-ball and then brought the scores level with a couple of glorious boundaries. It wasn’t the only record wiped off by the youngster, as he soon went past Glenn McGrath’s 61 which was the previous best by an Aussie No 11. His fifty was also the second fastest on Test debut by an Australian, taking him four balls more than Adam Gilchrist.

Hughes, who scored an inconspicuous half-century himself, was happy to watch from the sidelines. It was only the fifth time in Test history that Australia had achieved a 100-run partnership for the 10th wicket.