Five wickets at Lord s, ten at Edgbaston, a hat-trick, a hundred... why would they remember Chetan Sharma for that last-ball six and no more?

Even then, back in my pre-teens, an age when I had never heard of the term pre-teens , I knew that Lord s was a special ground. I was aware of the fact that India had never won a Test at Lord s. And while Doordarshan never bothered to telecast the 1986 tour of England (this was an era when live telecast was stopped to show the Prime Minister attending functions), they did us a favour by providing a daily highlights package.

I had seen Chetan Sharma before he made it to the tour. I remembered him from the Bombay Test (of Laxman Sivaramakrishnan fame), where he opened bowling with Kapil Dev. I was somehow fascinated by the idea of two bowlers from the same state sharing new ball (Javagal Srinath and Venkatesh Prasad would show up in a few years time, followed by some others).

Chetan had been dropped from the Delhi Test. Then the selectors dropped both Kapil and Sandeep Patil from the Calcutta Test. They recalled Chetan and gave a Test cap to a frail youngster called Mohammad Azharuddin.

They typically remember the Test for Azhar s hundred on debut, Ravi Shastri batting on all five days of a Test, and Sunil Gavaskar killing the Test by extending the first innings of the Test to halfway through Day Four.

What they do not remember, however, is this: England were sleepwalking to a draw at 261 for 6 when Chetan took 4 wickets in one quick burst caught-behind, leg-before, caught at slip, and caught and bowled. England folded for 276. There was obviously no question of a result, but 4 for 38 were fantastic returns for a replacement bowler on a dead pitch.

I remember being surprised by two other things: first, he was remarkably short for a fast bowler; and secondly, it seemed he would collapse in a heap the moment he released the ball.

I decided to have an eye on this man. He replaced an injured Roger Binny for the final of the World Championship (that India won). He was expectedly overshadowed by Kapil and Siva, but 7-1-17-1 were not bad figures again, for a replacement bowler.

Sri Lanka won their first Test later that year, at P Sara Oval. Rumesh Ratnayake obviously stole the show with 9 wickets, but what about the youngster who took 6 of the 13 Sri Lankan wickets to fall?

It was at this time that I decided that I had found a favourite. Somewhere deep down I knew he would never become a Gavaskar or a Kapil or a Dilip Vengsarkar (the adulation for Azhar or Raman Lamba was yet to follow), but I decided he would be my hero.

He got a lot of wickets but went for runs in the Benson & Hedges World Series Cup. I remember him finishing with third-most wickets in the tournament, but hey, did I mention a Test fifty at Adelaide on the same tour?

Then he took 3 for 35 in the Austral-Asia Cup semi-final against Sri Lanka. He also took 3 wickets in the final against Pakistan a fact few remember till Javed Miandad hit him out of the ground to seal one of the most outrageous wins in ODI history.

I remember getting teased at school, which only increased my fondness for the man. I wanted him to do something, something big.

And so, on a hot afternoon, I sat glued next to my grandfather s ancient shortwave radio set (summer vacation, you see) as Chetan Sharma ripped the heart out of England at Lord s. He took 5 for 64, England got 294, and India won their first Test at Lord s. And as always, he was overshadowed, this time by Vengsarkar.

No, I did not pick up the receiver of the black, heavy telephone set to taunt back. I was not allowed to.

And then, almost inexplicably, he injured himself before the Headingley Test. By this time school had reopened, but the Lord s Test was a thing of the past. India roped in Madan Lal from league cricket. Poor Chetan saw Binny and Madan toy with the batsmen on a pitch where he could have run through England (in my opinion).

He returned at Edgbaston and took 10 wickets in the match. He finished the series with 16 wickets, I remember, the most from either side, despite missing a Test.

This obviously gave me an opportunity to get back after the Sharjah match with why Test cricket, especially in England, is the real thing; I had rehearsed the speech, you see.

India spent the next year or so playing at home, which meant Chetan had little success. But then, don t champions deliver when it matters the most? How about a hat-trick the first by an Indian and the first in the history of the World Cup and the first all-bowled one?

The hat-trick was remarkable, more so because of the sequence: Ken Rutherford, middle-stump; Ian Smith, off-stump; and Ewen Chatfield, leg-stump. Despite that, what I remember most from the hat-trick is the celebration: Chetan galloped (cantered) towards the striker s end, and as if things had not been surreal enough till then flung himself on the ground and grabbed Kiran More s knees.

No, it made no sense, but I remember myself clapping and laughing simultaneously in front of the television set.

Then West Indies came to India. On a lively pitch at Delhi, India were shot out for 75 on the first day by Patrick Patterson and Courtney Walsh, but what did Chetan do? He got 3 men that afternoon Viv Richards included and 2 more the morning after. He finished with 5 for 55, and West Indies were bowled out for 127.

West Indies won the Test, but Chetan took 4 more wickets in the Bombay Test. He was dropped at Madras (where Narendra Hirwani debuted). He went to West Indies a year later but did little of note. Even if he had done something, I would have not been allowed to stay up (why do you have to listen if India are getting thrashed?).

Unfortunately, Manoj Prabhakar had been rising through the ranks all this while. Unlike Chetan, Prabhakar could bat, even open which meant that Chetan had been relegated to the third seamer s slot.

Did I just say Chetan Sharma could not bat?

The Nehru Cup of 1989 was supposed to include New Zealand as well, but it went ahead with six teams in the end. India beat Sri Lanka but squandered a near-victory against West Indies. Thus, when England scored 255, few gave India a chance.

Lamba did not last. Neither did Krishnamachari Srikkanth, then leading India. Navjot Sidhu, India s newfound six-hitter, was batting at a brisk pace. As Srikkanth fell, we waited for the tall, upright, familiar frame of Vengsarkar to emerge.

Instead, it was the short, bearded man from Haryana. The brand of batting that followed can definitely be branded as agricultural. Graham Gooch s orthodox, MCC-bred mind seemed utterly clueless against the onslaught.

With Sidhu also going strong, England fell apart. And to everyone s surprise, Chetan resorted to singles to keep the scoreboard moving. This was a man, a bona-fide slogger playing his 56th ODI, with only one score (38*) in excess of twenty till then.

Chetan reached 97 (who would have thought?). By then Sidhu had been replaced by Vengsarkar. With 9 required, Vengsarkar went for an inexplicable slog for four.

What conspiracy was this?

This made me and Chetan very tense, though probably not in that order. He ran down to the other end and consulted Vengsarkar. Goodness knows what they discussed, but Vengsarkar soon lobbed a ball to cover.

Kapil walked out to face the last ball. He blocked it gently, but since this was Kapil, the gift of timing took the ball to the cover fence.

Now Kapil and I looked crestfallen: what had he done to his Haryana teammate?

With India needing 1 and Chetan 3, Gooch took the ball himself. I don t remember the ball, but I remember the field being up (the scores were level). The field placement helped Chetan: the ball sped to the off-side boundary, and Chetan Sharma had become India s unlikeliest ODI centurion.

And the two of us celebrated.

But Australia posed serious threat as well. They got 247, and their bowling attack was definitely superior. Srikkanth and Lamba added over a hundred, but wickets kept falling at regular intervals. From 191 for 4 India suddenly became 209 for 7.

Chetan, by now batting above Prabhakar, More, and Arshad Ayub, batted brilliantly at this stage. No other wicket fell as he got the runs in the company of Prabhakar.

I was there at Eden Gardens for the last league match. Pakistan walloped India to reach 279 for 7. While I remember Imran Khan s terrific onslaught, I was also confused by Srikkanth asking Chetan to bowl only 5 overs. He had conceded only 23, so it seemed stranger.

Srikkanth and Lamba then matched each other stroke for stroke. After 20 overs India were 112 without loss an incredible start by 1989 standards. Then Lamba holed out to the deep, Srikkanth slipped and was run out, and Mohinder Amarnath and Vengsarkar failed to get the pace going.

Then something very unusual happened. Eden Gardens erupted into joy when Vengsarkar fell. It took me a few seconds to realise that the 90,000-strong crowd was actually applauding the arrival of Chetan Sharma…

It turned out to be anticlimactic. He fell for 10 and India lost by a huge margin. And then Chetan vanished, almost for good.

They took him to South Africa in 1991-92. He did not do much there (by then Srinath had arrived), and was surprisingly recalled after Prabhakar was dropped (as was Nayan Mongia) midway through the 1994-95 Singer Cup under controversial circumstances.

The platform was set. India got 289. Srinath and Prasad bowled beautifully with the new ball. New Zealand became 27 for 3.

What did Chetan do on comeback? Of course, he ruined it: Stephen Fleming took 23 off his over, and he never bowled in the match, and never played in the tournament again.

They gave him another chance. For some reason India and West Indies were playing the Singer Cup and a bilateral series simultaneously. Chetan did not do too badly in the last 2 matches of the series, but never played again.

And he took away a slice of my childhood with me, from an era when I had fought with parents and relatives and classmates, trying to convince them with or without reason that he was the next big thing.

Five wickets at Lord s, ten at Edgbaston, a hat-trick, a hundred… why would they remember him for that last-ball six and no more? 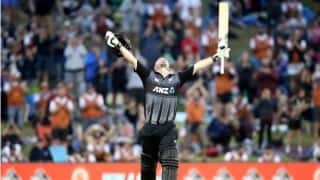 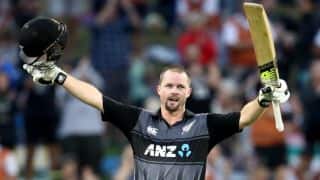