Many more milestones await Kohli, but when he looks back at Trent Bridge 2018, this hundred will make him smile.

Despite a Test batting average of 49.50, memories of what Cheteshwar Pujara brought to this Indian Test team had started to fade with each dismissal this year. Thus it was timely that Pujara dug deep into his reservoir of talent and came up with a vital 72 on day three at Trent Bridge – his first Test fifty in six innings.

With his skipper Virat Kohli, who made 103 as India declared with a lead of 521, he put on 113 in 50 overs on an agitated surface. Yes, he should have pushed on to a century after playing 208 balls, but what India have gained from Pujara, whose 72 was a welcome reminder of the cussedness that has seen him over 4600 runs, will be told in the two Tests that remain in this enthralling Test series.

It has been a difficult year for Pujara, and questions have been asked about his place in the current Test line-up. In three Tests in South Africa in January, he totalled 100 runs for an average of 16.66 – 50 of which came in one innings. While most of his India team-mates were playing the IPL, Pujara went back to Yorkshire and averaged 14.33 in six four-day matches. Around the time critics started bringing up his Test average of 22.20 in England, Pujara did himself no favours by making 1 and 23 during India s three-day tour match with Essex.

Come the first Test at Edgbaston, and his name was missing from the team sheet. Pujara returned for the Lord s Test, ran himself out for 1 and in the second innings did well to absorb 87 balls before playing around a lovely inswinger. In India s first innings at Trent Bridge, Pujara wrongly advised KL Rahul to ask for a review and then, on the stoke of lunch, was out for 14 hooking to long leg.

Innings by innings, Pujara s integral role for India appeared to have been eroded by doubt on his own part. How much worse could it get for Pujara, you wondered.

On the second evening, Pujara batted the most fluently he has in ages. He was quickly into his stride with a lovely straight drive off Ben Stokes, and two balls later he drove wide of mid-on for four more. Two boundaries off Adil Rashid hurried Pujara to 22 off 18 balls. But on Monday, as the Trent Bridge pitch became inconsistent, Pujara was forced to really tough it out.

In 29 overs during the morning session, India scored 70 runs but increased their lead to 362. Pujara was dropped on 40 by Jos Buttler. Pujara used that drop to add 32 runs to his total before he edged Ben Stokes behind the wicket, rewarding the bowler for a fine display of bowling.

It was a painfully constructed innings for Pujara, consuming 208 balls – the longest he has batted since November 2017 – but crucially keeping England wicketless during the first session while extending India s lead to the doorstep of 400. He was beaten, he inside-edged, he saw outer edges fall short of slips and point and he was made to look awkward by balls that kept low and reared up but this is where Pujara has traditionally thrived, and in scoring 72 he would have gained back much confidence.

It would have also instilled in him the belief that runs can be ground out in tough conditions, which he has struggled to do on tour and against the red ball all summer. The more occasions that Pujara helps India out of difficulty overseas, the harder it will be for people to suggest he shouldn t be in the team.

As for Kohli, this match has confirmed him as one of the Test greats. He came to England determined to prove he could bat here, after tallying 134 runs in ten Test innings in 2014. At Edbaston, Kohli took a big step towards that with 149 and 51. At Lord s, during the toughest day on which to bat, he made 23. In the second innings, with a stiff back, he made 17.

At Trent Bridge, Joe Root s decision to put India in played right into Kohli s hands. He was furious when he fell to Rashid on 97, but after Hardik Pandya s stellar day Kohli had a chance to atone for that lapse of concentration.

And thus Kohli s 103 – during which he became the sixth Indian batsman to score 400 runs in a Test series in England – stands out for its maturity and calmness. He had fallen three runs shy of a century in the first innings, and was determined to make amends. Despite the struggles on day three, Kohli s footwork was the best of each Indian batsman. This was not a surface on which he could bring out those nifty drives and flicks. He could not stretch forward to pace and spin and dominate the crease even in defence. An early attempt to flick Chris Woakes saw the ball fly between point and gully for four. When Stuart Broad came on, the ball was reversing and Kohli was rapped on the pads. Suddenly he found himself on the back foot, with the deviating bounce not allowing him to thrive.

He rode his luck in a feisty tussle with James Anderson all day, beaten numerous times and then, on 94, looking on as Keaton Jennings dropped him at third slip. Off the next ball, Kohli edged just short of first slip. The look on Anderson s face was of a man who s just spent his last few dollars on his favourite ice cream sundae, only for a flock of pigeons to defecate on it.

Nothing distracted Kohli from his duties, and this century will remain special once India wrap up a famous away victory. After the abject failure in England in 2014, and personal success in Australia in 2014-15 (692 runs in four Tests) and South Africa in 2018 (286 runs in three), these five Tests were the yardstick by which his greatness was going to be judged. It has taken Kohli six innings to confirm himself as one of the greatest ever. 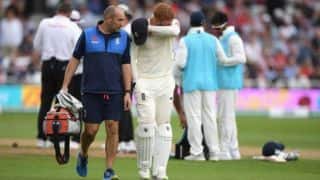