The Chennai Super Kings and Sunrisers Hyderabad played out one of the best matches at the Champions League T20  2013 in Ranchi on Thursday. Chennai won the high-scoring match by a close margin of 12 runs. Suresh Raina, MS Dhoni, Darren Sammy and Dale Steyn were some of the outstanding performers on the day. Shrikant Shankar analyses the contributions of all the players in the Group B encounter. 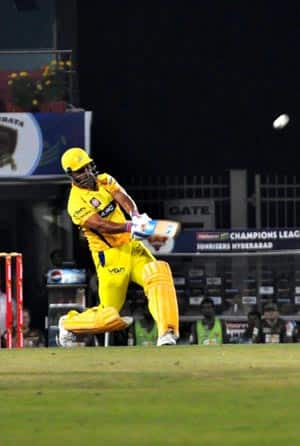 MS Dhoni was belligerent against the Sunrisers Hyderabad as he scored the fastest half-century in CLT20 history. His fifty came in 16 balls © IANS

The Chennai Super Kings and Sunrisers Hyderabad played out one of the best matches at the Champions League T20  2013 in Ranchi on Thursday. Chennai won the high-scoring match by a close margin of 12 runs. Suresh Raina, MS Dhoni, Darren Sammy and Dale Steyn were some of the outstanding performers on the day. Shrikant Shankar analyses the contributions of all the players in the Group B encounter.

The Champions League Twenty20 (CLT20) 2013 witnessed a scintillating game between the Chennai Super Kings and Sunrisers Hyderabad. The high-octane clash saw a total of 392 runs in the 40 overs. Unfortunately there could only be one winner and it was Chennai who prevailed over their Indian Premier League (IPL) rivals by 12 runs. Suresh Raina (84) and MS Dhoni (63 not out) stole the show with their brilliant batting and some power hitting. Let’s look at the contributions made  by all the players who played in the fascinating contest.

What can one say about Murali Vijay, especially after two back-to-back ducks in the CLT20 2013! He was out for a first-ball duck against the Titans on September 22 and he was dismissed by Dale Steyn on the second ball of the match. Vijay chased an out-swinger and edged it to Shikhar Dhawan at first slip. What would annoy Vijay is that both these matches have been high-scoring and he missed out.

Michael Hussey could not follow up on his 26-ball 47 over the Titans against Sunrisers. The Australian scored a sedate 21-ball 23 with two fours and one six.

There was always going to an argument as to who should get the Man-of-the-Match once Chennai won the match by 12 runs. Suresh Raina trumped his captain with an extraordinary knock of 84 runs off 57 balls. His innings included nine fours and one six. Raina is in brilliant form, especially after the 28-ball 47 against the Titans. He also affected Parthiv Patel’s run-out and then picked up the wicket of JP Duminy.

Subramnaniam Badrinath missed out an opportunity to get a big score on a flat wicket. He scored 13 off 18 balls and was dismissed by Duminy. Steyn took a good catch at long-on.

If Raina’s innings was exquisite, MS Dhoni’s innings was something else altogether. He scored the fastest half-century in CLT20 history. He struck eight sixes and one four.  Dhoni smashed five maximums off Thisara Perera’s over. In the end, Dhoni scored an unbeaten 63 off only 19 balls to help Chennai post a massive total of 202 for four.

The West Indies all-rounder faced only four balls in his innings, but got two wickets when Chennai were defending the total..

The slow-left arm spinner was expensive as he conceded 22 runs in only one over. Ravindra Jadeja also scored gave away 49 runs against Titans.

It was one of those matches where the services of Albie Morkel were not required to a great extent. He did not get to bat and with the ball he gave away 19 runs in two overs.

The West Indies fast bowler had a good outing with the ball. Jason Holder picked up two wickets for 39 runs.

Ravichandran Ashiwn was an unsung hero for Chennai on Thursday. He picked up two wickets and kept the run-scoring in check.

The right-arm seamer was expensive on the day. Mohit Sharma went wicket-less in his four overs. He conceded 41 in those. Sunrisers Hyderabad (According to batting order)

The Sunrisers wicketkeeper began well in his innings and put together a solid and quick opening stand with Shikhar Dhawan. Their opening partnership was worth 87 runs in 9.2 overs. Patel scored a 28-ball 37 with six fours. He was run out by Raina. In the context of things, his innings did not help Sunrisers a lot.

The captain found it extremely difficult to keep Chennai’s run-flow in check as Raina and Dhoni were going berserk.  Dhawan scored a 34-ball 47 which included seven fours and one six. He edged a wide delivery from Ashwin to Dhoni behind the wicket.

Duminy had an indifferent match as he excelled with the ball, but failed with the bat. He is a batsman who can bowl. He picked up two Chennai wickets and kept the batsmen quiet when others went for plenty. But, he was bowled by Raina for a three-ball duck.

After a wonderful game against Trinidad and Tobago, it all went pear-shaped for Thisara Perera. He conceded 60 runs from his four overs,  of which 34 came in his last. Dhoni smashed five sixes in the 18th over bowled by the Sri Lankan all-rounder. He then could only muster 12 runs off 11 balls before getting out to Bravo. However, Perera did take the catch of the tournament at long-on to thwart Raina’s chances of getting a century.

The reason Sunrisers came so close to victory was because of Darren Sammy’s power hitting. The West Indies all-rounder battled a niggle to score 50 off 25 balls. He struck two fours and five massive sixes. Sammy was not that effective with the ball as he gave away 39 runs in three overs. But the crowd in Ranchi witnessed another great innings.

Ashish Reddy  had a poor match as he was out for three. He top-edged a pull off Bravo and Dhoni took a brilliant catch running backwards.

It is surprising that Dhawan has not used Karan Sharma with the ball at all in the last two matches. The leg-spinner has a good record for the Sunrisers, but does not seem to have the faith of his captain. He scored 11 runs.

Hanuma Vihari did not have much to do as he did not bowl. He only faced three balls and scored five runs.

Considering the match situation, Amit Mishra bowled quite well. He conceded 13 runs in two overs. Dhawan utilised Duminy’s full quota of overs, so, could not make sure Mishra completed his.

Ishant Sharma again had a poor match with the ball. He gave away 40 runs in his four overs. He also misfielded a simple chance and that eventually resulted in Dhoni smashing four sixes in-a-row.