Channel Nine made the Indian viewer of the 1980s feel, for the first time, that cricket can be designed for the viewer, and not executed just for the sake of it.

The Benson & Hedges World Series Championship of 1984-85 was perhaps India s greatest success in a tournament of global magnitude, but I was too young to savour it. I understood wins and defeats and match scores and runs and wickets, but I was still learning.

India went to Australia again, a series later. This time I was ready. Doordarshan telecast the India matches of the Benson & Hedges World Series Cup live. It was long tournament (longer than each of the first two World Cups): India, Australia, and New Zealand played each other 5 times, followed by best-of-three finals.

Those were different times. BCCI actually had to pay (not the other way round) Doordarshan for matches in India to be telecast. Doordarshan responded by breaking the coverage abruptly for news in numerous languages, University Grants Commission programmes, live telecast of the Prime Minister inaugurating random entities, and more.

But we still waited, because we knew that this was all we were going to get. It was at least live telecast, still better than waiting for the 7 PM news or, worse, next day s newspaper. Radio was always an option, but television had pictures

But what was the telecast actually like? Let me explain. Till the mid-1980s cameras were placed on one end of the ground. This meant that we got to watch half the overs from behind the batsman. This changed with time.

Obviously there was no close-up when it came to action replays. The ball was a blur when someone of decent pace bowled. The camera sometimes failed to follow the ball when it left the vicinity of the pitch after a shot; even if they did, the quality of the feed was so poor that you had to assume the ball s journey based on the fielder s movement. And then there was the commentary

In other words, Doordarshan charged BCCI for every match they showed and provided little to the viewer. We watched cricket on Doordarshan for two reasons: first, there was no other option; and secondly, we had no clue that live telecast of sport could be anything superior to that.

In other words, nothing had prepared me for that cold January morning in Calcutta.

They were all in coloured attire, pads included. The ball was white. The players smeared zinc oxide on their faces (numerous hours were spent in India in researching exactly what the substance was). The outfield was lush green. These were novelties. They were there the previous year as well, but that was a marquee tournament. This was just an ODI in Australia.

Years later, I could see why Kerry Packer and his World Series had been such tremendous success when they started playing under lights. Packer had added team songs, played on loudspeakers, to the package. My perceptions towards white-ball cricket would change over time, but even now I understand how Packer had sold cricket to a world that could not imagine a parallel to the international format.

To begin with, the cameras were zooming in. They were close enough to capture the expressions of Craig McDermott as he walked back to the mark. This was followed by a close-up of the batsmen (Sunil Gavaskar in sunhat, Krishnamachari Srikkanth in helmet). And at the top right was the score, complete with the over

Now this may not seem much of an innovation in 2018, but back then this was not something we could imagine. Later that year we would be treated to the feed from the FIFA World Cup in Mexico, but that was after this.

It took me time to get used to it. When a fielder chased a ball, so did the camera. When the throw returned to the wicketkeeper, we almost always got a side-on view. If they were not quick enough to do that in real time, they made sure one of the replays covered that.

Whenever there was an event a boundary or wicket, or even an excellent display of fielding it was replayed in slow motion. And unlike the Doordarshan feed, where a second camera angle was regarded as luxury during action replays, we were treated to several of them, with Richie Benaud quipping in with inputs.

Speaking of Benaud, how could I ignore the commentary? I had probably heard Benaud before (where?); at least his voice seemed familiar. Ian Chappell s did not I had little memory of the 1984-85 World Series. And between them they produced commentary of a quality I had never experienced before.

Nobody had ever analysed the sport for me the way Chappell did. Bill Lawry and Tony Greig must have been there as well, but the lingering memory is of Chappell and, of course, Benaud. Perhaps it had to do with the fact that they actually showed the names of the commentators.

But it did not end there. When a batsman walked out, the display shrunk into a small rectangle. The rest of the screen displayed everything, from age to debut match to intricate career details. The scoreboard, whose appearances were remarkably frequent even showed the number of balls faced by every batsman.

But the biggest shock awaited me when Ravi Shastri was bowled. The dismissal was one of its kind. He exposed his leg-stump to the left-arm pace bowling of Bruce Reid and was bowled, you can say, round the legs, you can say, for nought.

I woke up with a jolt when Shastri took his long walk back. An animated duck walked across the screen as the camera caught him close. Only much later did I get to know the duck had a name: Daddles.

This may not seem a major thing, but at that point it seemed a novelty. I knew that a score of zero was called a duck (did I?), but I had never imagined I would see one walking across the screen. Not only that: Shastri s score was registered as a duck even on the scoreboard, instead of zero.

Benaud came on air to sum up everything between innings and after the match. And the post-match presentation was surprisingly smart. India s defeat did not even register.

There were more, many more aspects throughout the match that I can emphasise upon. For the first time cricket telecast seemed to be designed for the viewer, and not executed just for the sake of it.

Everything changed that day. That day changed cricket for me, and perhaps many others. And once cable television took over, waking up on winter mornings was never a chore anymore.

Till Benaud was there, at least. 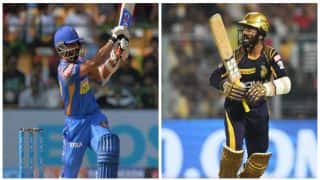