Garry Sobers, Barry Richards, and Roy Marshall all batted that day, but the most curious announcement on the loudspeaker was on an entirely different topic.

A curious announcement took place over sausage sandwiches during a County Championship match at Portsmouth on August 30, 1968. Abhishek Mukherjee describes the chain of events.

Three days had passed since the historic Oval Test of 1968 the one where Basil D Oliveira scored a hundred so significant that it would result in South Africa s two decade ban, where the crowd joined the ground-staff to mop up the ground after rain, and where Derek Underwood won the Test with minutes to spare.

This was also the season when sponsorship became big in cricket in England. In the same Oval Test, Gubby Allen was horrified at the sight of an XS Insurance board on the ground. The floodgates would open after that. No longer would Gillette remain the only sponsor of the sport in the country.

Hampshire were hosting Nottinghamshire at Portsmouth. It was an upper-half Championship match (Notts would eventually finish fourth and Hants fifth). Both sides had some outstanding stroke-players men like Garry Sobers, Barry Richards, and Roy Marshall who were guaranteed to draw crowd.

Richards had slammed a double-hundred on the first day. He and Marshall added 207, and Hampshire declared on 411, scored at 4.24 an over. Nottinghamshire were slower, but Sobers declared 80 behind on the final day. Marshall set Notts 203, and the match fizzled out to a draw.

Paul Brown, a boy (but old enough to travel alone) from Clay Hill Drive, Gosport, had come to watch the final day s play. Like many others of his age, he carried a packed lunch of sausage sandwiches.

There was nothing unusual about all this. He was intently watching the day s play when the loudspeaker blared across the ground, announcing his name. His father had a message for him: Don t eat the sausage sandwiches the sausage is off.

Poor Paul was stripped of his lunch. Of course, like all boys of his age, he had started off way before the announcement. I was so hungry that I had three of the sandwiches before I heard the morning, he later confessed. Thankfully, he had an excellent digestive system that prevented any harm.

Of course, the Hampshire Cricket Committee had no idea of Paul s voracious appetite. How could they have lunch when a poor boy was left starving? So the public announcement system did its job again this time inviting Paul to have lunch in the members room at the expense of the club. 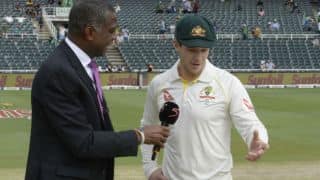