England edged out New Zealand in the final to win their maiden World Cup title at the Lord's Cricket Ground on Sunday.

Ahead of the semi-final in Manchester, everyone had a simple question to ask did New Zealand even deserve to be there, denying a second India-Pakistan clash at the same venue in this 2019 Cricket World Cup?

Ask any Pakistan fan, and the answer would be no. Ask any Indian fan, they would shrug it off, for they were only too happy to have an easy semi-final opponent. They were both wrong India brought crashing down from orbit, failing to chase 240 runs. And Pakistan, well, no one really cares.

Fact of the matter is New Zealand were consistent, Pakistan were not. Yes, they beat England and New Zealand too, but the latter were on point when it mattered. They didn t get rolled over for 100 against West Indies in a long-run tournament like this, luck matters as much as consistency. Pakistan had neither, New Zealand had both, and they deserved to be in the semi-final. Don t let anyone tell you otherwise.

Then, they deserved to be in the final as well. Eoin Morgan talked about the Black Caps being ruthless against India it was an odd statement. Kane Williamson and ruthless? Martin Guptill, Ross Taylor, James Neesham, Trent Boult, and the rest ruthless? No. They are nice guys. How could they be ruthless?

In that notion, Indian cricket did a great disservice to one of their own Rahul Dravid. He was the quintessential nice guy, and he was also ruthless, both as batsman and as captain. It didn t show on his face when batting countless hours. It didn t show in his demeanour when he was leading the side to Test victories in West Indies or England. Ruthlessness is not just in playing aggressive cricket, or shouting at the top of your voice at every fall of a wicket.

It is about not giving an inch to the opposition. It is about planning to perfection, executing those plans, strangling the scoring, etching out those wickets and manoeuvring the game in your favour. Like Dravid, Kane Williamson has been their statesman, and New Zealand have done precisely the aforementioned. They may be the only side (apart from Afghanistan) to not score 300 runs in any innings of this World Cup.

But they are the only side to stop most teams from scoring 300 in this World Cup. Only England did it, while on eight other occasions, the opposition was restricted from scoring freely. And that s the underlying point New Zealand were aware of their weaknesses, especially the over-dependency on Williamson, and they played around it.

Their ruthless streak emanates from understanding attrition cricket at its best. Their game plan rested on understanding conditions early, surmising what a good score would be, and the best way to reach there. In the semi-final against India, they took 8/over against Bhuvneshwar Kumar and Jasprit Bumrah by simply running between the wickets. In the Super Over on Sunday, barring a six, they ran the rest.

Then, it was about defending the score, at whatever cost. In that, they were helped by a sensational bowling attack easily even better than India s at the moment. As the tournament had progressed, India s wrist spinners faded and Virat Kohli needed new options. Williamson never faced that challenge, and armed with this bowling strength, he choked India in the semi-final and then choked England in the final, well nearly.

An argument can be made here that this is a one-dimensional plan, and it won t work at all times. Well, it didn t New Zealand had faded away in the latter half of the tournament, only recovering in time for the knockouts. This is where the uncontrollable steps in, and on Sunday, took the shape of an overthrow as well as boundary counts. It was a double whammy nice guys don t recover from such a blow.

Make no mistake there was no better or worse team amongst the two on Sunday. Both England and New Zealand played, and indeed finished, as champions. Albeit, only one took home the trophy.

ALSO READ: Kane Williamson scores most runs for a captain in a World Cup

And it brings us to the final juncture of this tournament were those overthrows justified? Yes, the rules are pretty clear about them. What about the boundary-count rule? Well, that is pretty nonsensical. Perhaps, Super Overs can be decided based on boundary count in league matches of an ICC tournament, or bilateral series, or wherever else.

In a final, where everything is on the line, where two teams fight like gladiators as if a matter of life and death, where two equals cannot be separated, an overly complicated ruling of counting boundaries takes away from the proverbial spirit of the game.

Williamson shrugged it off. But don t you dare do the same. Remember it, celebrate it, and cherish it, as the greatest ODI match ever contested. Beyond expectations, New Zealand made this World Cup final what it was, a spectacle, and don t let anyone tell you otherwise. 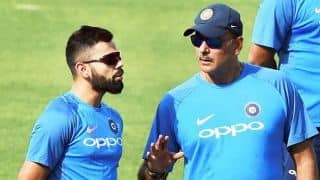