Stokes got four for the boundary, which added to the two he had already run give him six runs off the Trent Boult ball.

Call it a miracle or just sheer luck, England received six crucial, historic runs in the unlikeliest fashion to deny New Zealand World Cup glory in the final of the ICC Cricket World Cup 2019 at Lord s on Sunday.

England needed 15 off the last over. With three balls to play, the equation for the hosts was 9 from 3. Man-of-the-match Ben Stokes hit a ball into the deep and ran for two and in a desperate attempt to get back and retain the strike, he made a dive along the pitch when the throw was made, but the ball ricocheted off his bat and crossed the boundary, leaving England 3 from 2 to win the World Cup.

Stokes got four for the boundary, which added to the two he had already run give him six runs off the Trent Boult ball. The runs were totally within the laws of the game as Stokes had not intentionally deflected the ball, but he wasn’t even looking at it when it hit his bat.

According to the rules: If the ball reaches the boundary due to an overthrow (even unintentionally off the bat) then the 4 runs for the boundary is added to the runs completed before the overthrow, which can lead to a batsman scoring six runs or more off 1 ball.

New Zealand captain Kane Williamson was distraught with the sequence of events that unfolded. It was a shame that the ball hit Stokes’ bat, but I just hope it doesn’t happen in moments like that. I don’t wish to nitpick, just hope it never happens in such moments ever again, Williamson, who was also the Player of the Tournament with 578 runs, said at the post-match presentation ceremony.

Christchurch-born Stokes apologised to the Black Caps on the field, then again after. “In that last over when the ball hit the bat and went for four, that’s not exactly what you ask for,” he said.

“I apologised to Kane countless times about that. It’s not exactly how you want to do it.”

Williamson said they were a few runs short. “We thought runs on the board – we would have liked 10-20 more. But in a World Cup final this was a competitive total. The bowlers really put the batsmen under pressure. It had to go down to the last ball, and then the last ball of the next little match, but a great match all round.”

“There were so many moments that could’ve gone either way, but congratulations to England – they’ve had an incredible campaign and they deserve it.” 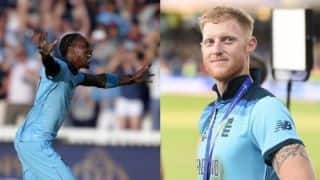 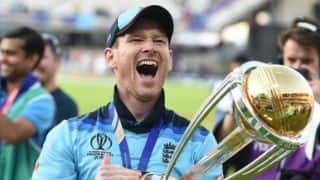