The Dhoni-Sehwag rift may have been true or blown out of proportion by the media. However, far from being unique, discords such as this have been commonplace in the history of the game. In this series, Arunabha Sengupta looks at some of the most famous feuds of cricket. In this episode he looks at long drawn out battle between Kim Hughes and the famous troika of Greg Chappell, Dennis Lillee and Rod Marsh. 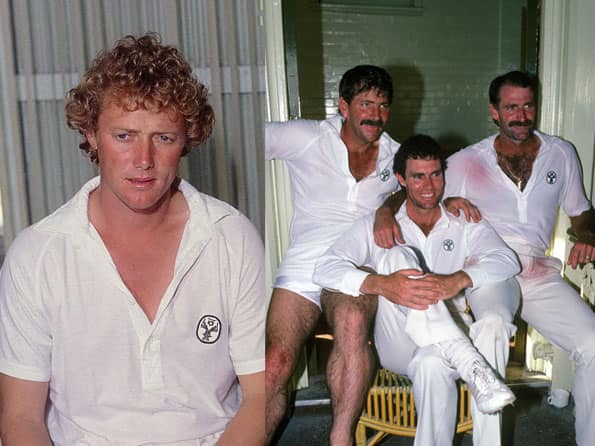 Kim Hughes (left) had to bear the unmistakable hatred of Rodney Marsh (in shorts), Greg Chappell (seated on the cane chair) and Dennis Lillee (extreme right) when he led Australia © Getty Images

The Dhoni-Sehwag rift may have been true or blown out of proportion by the media. However, far from being unique, discords such as this have been commonplace in the history of the game. In this series, Arunabha Sengupta looks at some of the most famous feuds of cricket. In this episode he looks at long drawn out battle between Kim Hughes and the famous troika of Greg Chappell, Dennis Lillee and Rod Marsh.

Effervescent, lovable and charming in his game and brilliant smile, with a clean shaven boyish face and golden locks off which sun almost bounced off, Kim Hughes perpetually looked the baby of the team. And he crashed headlong into three men hard as nails, bared fangs doubling up as wisdom teeth, facial hair characterising the Aussie spirit of their times.

It was a clash of generations in more than one way. The ebb and flow of time crisscrossed, and undercurrents reigned as the caretaker skipper of Australian cricket dealt with the return of the Packer men. Captaincy, which never sat quite easy on Hughes, would be taken away and reinstated time and again as Greg Chappell made himself unavailable off and on. When Hughes led the side, his Western Australian team mates, Dennis Lillee and Rodney Marsh came close to mutiny. Lillee thought Marsh ought to be the captain, and Marsh thought so as well. For a season, Hughes played under Marsh in the State side while being the deputy of Chappell for Australia. And when the selectors decided to quite logically handover the State captaincy to Hughes, Lillee and Marsh both refused to be the deputy.

It was more than the quest for honour. The men and the golden boy played differed in their views on cricket.

While Hughes would dazzle onlookers with strokes beyond the capability and imagination of mere mortals, step out to hit fast men over the top and hook faster ones off his face, he could throw his wicket away to rank long hops at the doorstep of glory. To him cricket was to be enjoyed.

The three musketeers of Australian cricket, three of the greatest ever produced by the land, thought differently. While no batsman has ever strode the twenty-two yards with more elegance than Chappell, his thoughts hardly dwelled on entertaining when there was a match to be won. And his rugged mates, Lillee and Marsh, famously combining 95 times on Test match scorecards, hardly ever had anything else on their minds.

It was this difference that made captain Chappell ignore the Hughes as he toured England as a starry-eyed youngster, until the Ashes had been lost.

While Len Pascoe has called Hughes the Fred Astaire of cricket, referring to his batting and swagger, the quickness of feet and the nonchalance of movement, Chappell was more prone to load his team with plumbers and bricklayers – Ian Brayshaw and John Inverarity if necessary – blokes canny at laying foundations. “Kim was young, enthusiastic, too gung-ho, wanting to break the barricades and take them on up front. Sometimes you need to skirt around the sides and set up an ambush. His mercurial sort of personality required a lot of management. He was high maintenance.” Chappell says, defending his decision.

The tour was marred by the Packer signings. Australians fared disastrously, to the extent of bungling 17 catches in the five Tests. The tour selectors, Chappell, Doug Walters and Marsh, copped a lot of flak for choosing an all Packer XI for the third Test. It was not until the fifth Test, with England leading 3-0, that Hughes, who had lost interest in the cricket and run out of form, was given a chance. When asked by the journalist Norm Tasker about how he felt, Hughes responded, “Those pri*ks. Now they’ve made me part of the failure.” His first innings was a 53 minute, 37 ball struggle for 1.

In all, 28 Australians featured in Kerry Packer’s World Series. Many of them were players seldom or never heard of. Yet, the Australian captain for the series, Ian Chappell, never thought it worthwhile to approach the talented Hughes. This did not really please the young man who later made unverified claims that he had been approached but had ignored the offers because of the Australian captaincy. However, both the Chappells, Lillee and others involved deny that he was ever considered.

“I was asked my opinion,” says Greg Chappell. “And I said he wasn’t ready.” It is difficult to imagine that only his lack of readiness kept him behind low-key performers like Robbie Langer, Dennis Yagmich, Wayne Prior, some over the hill stars like Ian Redpath, Ross Edwards and Graham McKenzie, and a blood relation called Trevor Chappell.

Hughes took over the reins from Graham Yallop, and started his tenure with a series victory against Pakistan, an unsuccessful World Cup campaign, and a tough, fruitless tour of India. He was, however, relegated to being deputy of Greg Chappell once the Packer players returned.

For Western Australia, Marsh and Lillee refused to cooperate once Hughes had replaced the former as captain. When requested to share his thoughts during a team meeting, Marsh burst out, “You’re the captain, you control the meeting.”

Named vice-captain for the tour of Pakistan under Hughes when Chappell became unavailable again, the wicket-keeper declined. Just before the tour, he told the Playboy, “Kim’s bloody good company, but he’s always liable to do silly things.”

Let him stew in it

The 1981 tour to England is remembered for the amazing turnaround engineered by Ian Botham’s miracles. However, the same series is equally memorable for the public fallout of Marsh, Lillee and Hughes.

Marsh often held his gloves up and whistled fielders around, rearranging fields set by the captain. Hughes, in his affable way, rejoiced in this. He told whoever cared to listen how Marsh’s field swaps had brought about immediate dismissals off Lillee’s bowling, “I’m hardly a captain at all, but Marsh, Lillee and Hughes is a bloody hood captain.”

However, relentless antagonism of Lillee and Marsh, and all the diplomatic responsibilities of a captain, took their toll.

When coach Peter Philpott confided Marsh, “We’ve got to try to help him”, the wicket-keeper responded, “He’s got the job. Let him stew in it.”

Things did not improve on the field. With England in big trouble while following on at Headingley, Hughes refused Lillee a fly slip to bowl at Peter Willey and twice the ball sailed that way. When Marsh coaxed him into having one, the batsman was immediately caught.

In walked Botham and changed everything. Lillee kept bowling short and wide, and Botham kept hitting them. Ladbrokes offered 500-1 odds against England, and Marsh and Lillee did the captain no favours by punting £ 5 each. Had Greg been the captain, they would have never done it, writes  Adrian McGregor, Chappell’s biographer.

When Chris Old came in to bat, he saw Lillee, Marsh, Terry Alderman and Hughes all signalling different fielders to different positions. The English tail stood firm with Botham plundering runs at the other end. With 130 to get, Australia folded for 111. By the next match, England had made it 2-0 with a 29 run win, Hughes falling to a hook shot while chasing 151, a stroke that was severely criticised – especially by Marsh. Bob Taylor, the English wicketkeeper, wondered, “How much respect he is given by the former Packer players?” The dissent was open for all to see.

Mike Whitney, who made his debut at Manchester, recalls that when he had got Botham out, caught Marsh, he had raced down the wicket to celebrate only to be met by a taciturn wicketkeeper.  “He took the catch and stood there with his hands on the hops. I thought I had done something wrong.”

Things were scary even at practice. “Dennis would bowl bouncer after bouncer at Kim,” says Lawson. “He might have been bowling line and length at (Allan) Border. Then Kim would come in and it would be a different kettle of fish.”

In fact, Craig Serjeant remembers one net session in a different series when Lillee let fly at Hughes, nearly taking his head off, followed through, retrieved the ball and said, “Sorry.”

The tour ended in a half-frivolous, half-serious free for all in a bar where Hughes and Lillee tore clothes off each other, somehow restraining themselves from coming to blows.

The relationship continued to suck. Lillee and Marsh produced book after book, almost annually all ghosted by Austin Robertson. Lillee (My Life in Cricket and Over and Out) and Marsh (The Inside Edge, The Gloves of Irony and Gloves, Sweat and Tears) used full chapters to bombard Hughes with belittling, sarcasm and pure insults.  I didn’t like Hughes as captain … I didn’t think he was even close to being a good captain … A very mediocre leader of men … I thought him a poor captain – and I was no orphan… these are just a few excerpts.

Hughes responded telling Playboy “If I’ve got teammates like that, I wonder what I’d do for enemies.”

The feud continued through to the Prudential World Cup 1983, with Australia losing to Zimbabwe and India, and eventually crashing out of the tournament. An out of form Lillee was dropped by captain Hughes, and it made Marsh froth at the mouth.

Marsh continued to bristle as Hughes remained captain of the team by the slimmest of voting margins.

After the retirement of the three superstars, whom Whitney called, “The f***ing royalty”, Chappell continued to influence Australian cricket, now by patiently persuading the reluctant Allan Border to become the captain.

After a dismal away tour of the Caribbean, when the West Indies returned to visit Australia, Hughes failed in both innings of the first Test and resigned from captaincy in a tearful press conference. The Chappell brothers played huge roles in his final exit, Ian going all out in criticising the captaincy and Greg mentoring Border and helping Hughes with his press statement. Bill Lawry remarked, “The demise of Kim Hughes in Brisbane in a manner equal to be being dragged down like a dingo in the pack and devoured by your own, within and without, was a disgrace.”

Soon after a spate of ducks, Hughes joined a rebel tour to South Africa and never played for Australia again.

However, in spite of all he suffered because of the three big men, the lack of bitterness in Hughes is remarkable. He is now great friends with both Lillee and Marsh. And very recently, when contacted by Christian Ryan the author of Golden Boy – the only biography of Hughes, Greg Chappell went on record saying “I don’t say this about a lot of blokes, but I love Kim Hughes. I admire what he’s been through because my life’s been very easy compared with Kim Hughes’s life, and I think most of us could say that.”

Security concerns arise ahead of Bangladesh tour of Pakistan