Despite Curtly Ambrose's poor show, he still had an outstanding record at Perth.

February 3, 1997. Curtly Ambrose, probably the most feared, lethal, and accurate bowler of his era, lost his radar completely, sending down nine no-balls in an over, following it with six more in the next at Western Australia Cricket Ground (WACA), Perth. Abhishek Mukherjee looks at the day when the king went astray on his own territory.

Perth was Curtly Ambrose’s realm. Even if there had been no television coverage or newspaper report, a mind-boggling tally of 24 wickets from three Tests at 12.91 tell the story. His most famous spell at the ground, of course, the 5.2-4-1-7 burst in 1992-93: Australia, looking comfortable (if not cruising) at 85 for 2, were skittled out for 119 and lost by an innings.

WACA was, of course, West Indies’ favourite hunting ground. Going into the Test, they had won four out of four Tests on what was the bounciest ground in the world. Even during the 1-5 debacle of 1975-76, a ferocious 145-ball 169 from Roy Fredericks, accompanied by some hostile bowling from Andy Roberts, gave West Indies their only Test victory of the tour.

There was a reason that Allan Border considered WACA an “away ground for Australia”, especially if they were pitted against West Indies.

The Frank Worrell Trophy started off on a hard, flat track at The Gabba. Australia were down to 196 for 5 when Ian Healy came out and bludgeoned his way to a First-Class career-best 161 not out. West Indies, on track at 249 for 3, suddenly lost seven for 28, and ended up losing by 123 runs.

SCG was no better. This time Australia were 131 for 5, but the last five wickets added 200 to the total (even Glenn McGrath scored 24). McGrath and Shane Warne claimed seven wickets apiece, and West Indies lost by 124 runs.

West Indies needed to win at MCG to keep their hopes of regaining the Frank Worrell Trophy. It was then that Ambrose pulled off one of his best performances: his match figures read 9 for 72, and though McGrath claimed 8 for 91, Shivnarine Chanderpaul’s 58 and 40 not out made the difference in a low-scoring affair. West Indies won by six wickets.

Come Adelaide Oval, and Australia found a new assassin. Despite his inadequacy as a Test batsman, Michael Bevan has often surprised batsmen with his Chinamen, and often played as a bowling all-rounder. He shocked the West Indians with 10 for 113 (in addition to a dour 85); with Warne also claiming 6 for 110, Matthew Hayden slamming 125 and Greg Blewett 99, Australia claimed the series with an innings victory in Ambrose’s absence.

It was a hot, very hot day at Perth. Mark Taylor won the all-important toss. However, it did not matter: Taylor and Hayden were dismissed in the first 18 minutes, and by the time Blewett and Steve Waugh joined them at the pavilion the score read 49 for 4.

The temperature soared to 43°C after lunch, and Walsh — resilient, perseverant Walsh — had to leave ground after bowling nine wicketless overs due to a hamstring injury. This meant that Simmons and Carl Hooper had to share the workload; taking advantage of the situation, Mark Waugh and Bevan made merry, tiring out Ambrose and Bishop.

Brian Lara, leading in absence of Walsh, was resorted to give Ambrose and Walsh one-over spells after tea. The fifth stand added 120 at close to a run a minute, but Ambrose removed Mark Waugh, Healy, and Reiffel in quick succession. Warne and Andy Bichel resisted, but Bishop mopped up the tail.

The pitch looked terrible at this stage. The severe heat led to the pitch drying up and crumbling, forming huge, visible fissures. Wisden wrote: “The pitch was so thoroughly cut and compacted that it sported large, longitudinal cracks.”

A prince at work

Australia scored 243, and though West Indies were reduced to 43 for 2 on Day Two, Lara played one of those magical innings, scoring 132 from 183 balls out of a 223-minute partnership of 208. As the temperature rose, so did temper, and amidst everything, Lara dominated fast bowlers and spinners alike.

Lara had not scored a hundred in Australia since his famous 277 at SCG. This time he was cautious, reaching 50 in two hours before unleashing his strokes, adding 50 more in the next hour. “For him [Lara], the cracks closed up and the bounce evened out, or so it seemed. His innings grew like a symphony,” wrote Wisden.

Samuels grinded on at the other end, refusing to give in. It might have been the heat or a lapse of concentration, but Taylor gave Warne only two overs in a session during the partnership. When he came back, Lara took him for 26 from 14 balls, but Warne had his revenge, having Lara caught behind. Warne then had Samuels caught at slip.

Hooper, however, looked in sublime touch, and Jimmy Adams hung around, helping him put on a quick 40-minute 56. There was a burst in which three wickets fell for one run, but Bishop and Ambrose ended up scoring crucial runs. Walsh eventually emerged with Lara as runner, and West Indies extended their lead to 141 on Day Three.

It took over an hour for Taylor, Blewett, and the Waughs to be dismissed. Ambrose claimed two, but more significantly, Walsh dismissed the twins. Coming on first-change, Walsh could bowl no faster than medium-pace, but it was good enough for him to whisk out two wickets.

There was a 36-run stand, but Walsh kept on picking wickets, eventually finishing with five. Hooper dismissed Hayden for 47, and at 133 for 8, even an innings victory seemed possible. However, Warne and Bichel saved them the ignominy and took Australia to 150 for 8.

Then Ambrose steamed in to Warne. And all went awry. Darrell Hair was the hapless umpire at Ambrose’s end.

Ball 1: Short outside off, Warne goes at it hard. The ball takes the top-edge, there is a catch at wide mid-off, to no avail

Ball 2: Round the wicket, once again on target, Warne defends.

Ball 3: No-ball, takes off from a length, Warne is hurried on the backfoot and takes his eyes off, the ball hits him…

Ball 3: No-ball, Warne gives himself room and blasts over extra-cover, pulled off just before it reaches the fence, they run three

Ball 3: No-ball, short, Warne takes his eyes off again, hits him on the arms

Ball 3: Bichel steps out and blasts it through mid-wicket, they run three

Ball 4: Outside off, Warne attempts a poke, beats it bat and thuds into Browne’s gloves

Ball 5: No-ball, outside leg, Warne hit on the hips, the ball rolls to Browne, the crowd jeers Ambrose

Ball 5: No-ball, steep, very steep bounce, Warne has no chance to make a contact, Browne gathers it above his head, the jeering increases

Walsh moves up to Ambrose to cool him down. “This is getting a bit farcical,” utters Michael Holding on the microphone. Ambrose runs in again, but Warne pulls out…

Ball 5: Some respite for Ambrose, Warne leg-glances for an easy single

Ball 6: It finally comes to an end as Bichel flashes and misses; Ambrose raises his hands amidst tumultuous applause

The 15-ball over lasted 12 minutes, but the torture did not end for Ambrose there. He bowled six more no-balls in his next over, and was taken off after figures of 9-2-50-2 (that included 20 no-balls).

With Walsh not as his best and Ambrose reduced to ordinary, Bishop needed to rise to the occasion. He dismissed Bichel and Warne in quick succession, and West Indies were left to chase a mere 57. It was only the third day.

Samuels and Sherwin Campbell walked out, and with no pressure, Samuels unleashed his other avatar. He hit eight fours on his way to a 38-ball 35 as West Indies won by 10 wickets, chasing down the target in the 11th over.

–          West Indies have played in Australia only twice more and have lost on both occasions. Mark Waugh’s elegance and Brett Lee’s blistering pace gave Australia an innings victory in 2000-01. The other Test, in 2009-10, was a closer affair: Dwayne Bravo and Sulieman Benn restricted Australia to 150 in the third innings, but West Indies still needed 358. They reached 196 for 3 before slumping to 279 for 9; a last-wicket stand of 44 between Kemar Roach and Gavin Tonge could not see the tourists through.

–          Ambrose never played another Test in Australia. He finished with outstanding numbers at WACA (and MCG, to boot). The table below shows the impact he has had in overseas grounds.

Man of the Match: Curtly Ambrose.

Man of the Series: Glenn McGrath. 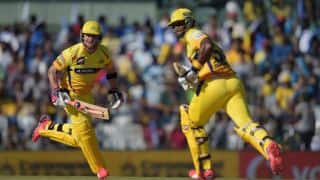 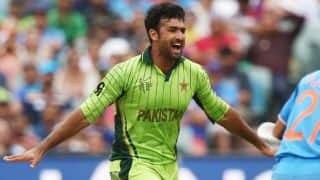