David Warner led Australia in five limited-overs fixtures against Sri Lanka, winning all of them.

The phrase “leading from the front” literally makes sense for David Warner, as he thrives when placed at the helm. In regular skipper Steven Smith’s absence, Warner has captained Australia in five matches: three One-Day Internationals (ODIs) and two T20 Internationals (T20Is). In addition, he has won them all. As a matter of fact, he scored a fighting fifty in the final ODI, ensuring Australia win the series 4-1. He had a poor Test series but still managed to turn a corner in the limited-overs fixture. Hence, is it time to make him the captain of Australia’s limited-overs format? READ: Will Finch have to sacrifice opener’s slot for Maxwell in T20Is?

IPL 2016: Warner played a key role in the Indian Premier League (IPL) 2016, where he led Sunrisers Hyderabad (SRH) to their maiden title. Not only did he captain the side well, he also scored runs heavily opening the batting and almost single-handedly got his team off to big scores. He used his bowling resources such as Ashish Nehra, Mustafizur Rahman and Bhuvneshwar Kumar to good effect. SRH right from the beginning had a balanced side, and many were not surprised to see them do well. Yet, Warner and his side did not have it all easy. They had to fight and claw their way to the top. They did have some close encounters, suffering disappointing losses in a few, but that did not dent either Warner or the team’s morale. They fought right till the end and ensured that SRH won the title. READ: Sunrisers Hyderabad’s IPL 2016 win was built around squad balance

The IPL 2016 was a major stepping stone in Warner’s career. All know that Warner is a destructive batsman at the top of order, but we had not seen him in a captain’s role. The management had entrusted Warner to lead the team in the last two seasons. They finished in the sixth position in 2015, but made a couple of good purchases in the following season, which gave them a balanced look. Warner used his resources extremely well and handed SRH their maiden title.

Vice-captain: Smith took over the reins as Australia’s Test and ODI captain after Michael Clarke called it a day. Warner, as a result, was made the vice-captain of the side. His rise across formats has been good, but Smith in the middle-order has been scoring runs at utmost ease. Smith had a tough time with the bat in the Test series against Sri Lanka, but did not fail to put up a good fight, scoring a couple of fifties and a ton.

Warner is not used to seeing a spinner take the new ball. He found it tough to negotiate and often resorted to his natural, attacking instincts in the longest format. It paid off at times; but sometimes, it did not. But that is Warner’s natural game and when you are under the pump, you generally resort to your natural instincts, which is exactly what Warner did.

The T20I captaincy too was handed to Smith in place of Aaron Finch, just ahead of the ICC World T20 2016. The workload on Smith would perhaps take a toll, and as a result, he flew homein the middle of the Sri Lanka tour to get some rest.

Limited-overs captaincy? The idea of having different captains for different formats is to ensure that the minds of the players remains fresh. They have the burden of leading the team in just one format, and they can keep themselves calm and contribute as much as they can in the other formats as a player. Yes, you do have to perform execeedingly well in the format that you lead in, but the additional responsibility of being a captain perhaps weighs you down—mentally and physically—which should not happen. You need your best players playing each and every game, and at the same time, you need them to be fit for long periods of time. READ: Australia review for Sri Lanka tour: Visitors learn from Test debacle; nail limited-over series

Having Warner as captain in at least one format makes perfect sense. Teams do not play a lot of T20Is in a year, but ODI cricket in on a rise. With ICC Champions Trophy a few months away, many teams will be looking to put up a good show in the ODIs. Smith is a good Test skipper for Australia, even though his team’s performance in the subcontinent is a bit shaky. His captaincy has been ruthless in the ODIs as well. Australia beat India 4-1 in an ODI series at the beginning of the year; he then followed it up with a Tri-Nation series win in the Caribbean, which featured West Indies and South Africa as well.  In between all this, Australia lost the Chappell-Hadlee Trophy to New Zealand 2-1. But Smith’s leadership in ODIs cannot be questioned at the moment. READ: SL vs AUS: Marks out of 10 for David Warner and co

But Warner, who has done captaincy in Smith’s absence, can easily be made the T20I captain. He has a couple of years of experience of being the captain in IPL, also not to forget the recent 2-0 whitewash of Sri Lanka away from home. Also, the promotion of an underfiring Glenn Maxwell from the middle-order to the opening slot turned out to be a masterstroke. Maxwell tore the opposition apart in both the matches and also got Australia to a record-breaking score of 263 in the first T20I. Maxwell opened the innings despite having regular opener Usman Khawaja in the team.

Warner’s predecessors would have perhaps saved Maxwell in the middle-order, so that he can give a boost to the team’s total in the later stages of the innings, but Warner wanted Maxwell to make use of the first six overs, where only a couple of fielders are allowed outside the circle. His gamble paid off, and it did not look like a gamble that Smith would have taken.

Whether or not Maxwell has sealed an opening slot in T20Is for Australia is yet to be seen, but it is high time Australia to give Warner the responsibility of leading the side in at least one format, which ideally should be the T20I format. 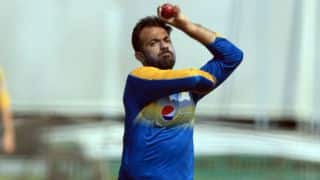