Rising Pune Supergiant (RPS) needed to win the match No. 52 of Indian Premier League (IPL) 2017 against Delhi Daredevils (DD) in order to qualify for the IPL 10 playoffs.

Rising Pune Supergiant (RPS) needed to win the match No. 52 of Indian Premier League (IPL) 2017 against Delhi Daredevils (DD) in order to qualify for the IPL 10 playoffs. However, the Steven Smith-led side faltered towards the ending stages to lose the clash by 7 runs, and will have to win their match on Sunday, May 14, against Kings XI Punjab (KXIP) to make it to the final four. Karun Nair was adjudged Man of the Match for his knock of 64, which propelled Delhi Daredevils to a strong total of 168 for 8. For Rising Pune Supergiant, Manoj Tiwary struck a 45-ball 60, but his effort was not enough. Let us take a look at the highlights of the clash in which MS Dhoni and Zaheer Khan made records. FULL CRICKET SCORECARD: Delhi Daredevils (DD) vs Rising Pune Supergiant (RPS), IPL 2017, Match 52 at Delhi

MS Dhoni s record: The iconic player took a while, but eventually got to his feat. Dhoni became the second player in IPL history, after Dinesh Karthik, to have affected 100 dismissals. With 4 catches as a non-wicketkeeper, Dhoni has 67 catches and 29 stumpings playing for Chennai Super Kings (CSK) and Rising Pune Supergiant (RPS) combined. Dhoni got to his feat when he collected a simple catch to get rid of Sanju Samson early in the contest.

Karun Nair-Rishabh Pant s stand revives Delhi: With Delhi Daredevils reduced to 9 for 2, Nair got along with Pant to add a crucial stand of 74 runs. Both the batsmen scored runs aggressively and erased all advantage that RPS had gained with cheap dismissals of Samson and Shreyas Iyer.

Karun Nair s match-winning effort: Nair put behind his disappointing run. Ever since he had made that unbeaten 303 against England late last year for India, the right-hander had gone through a slump. On Friday, Nair finally got to a milestone as he completed a fluent half-century. Nair scored 64 off 45 balls with 9 fours, but he was guilty of slowing down towards the ending stages of his innings.

The brilliance of Ben Stokes: Before he returns to England for national duty, Stokes once again sizzled in the IPL. Stokes returned with the figures of 4-0-31-2, took a splendid catch at boundary by sending the ball back into the playing area and then completing the dismissal. In RPS chase, Stokes contributed with a 25-ball 33 with 3 fours and 2 sixes, but at the end, his effort was just not enough.

Zaheer Khan s feat: The wily pacer got the first ball to sneak in between Ajinkya Rahane s bat and pads to dismantle the middle-stump. While it was a delight for Delhi Daredevils and their captain to snaffle a key wicket off the first ball, Zaheer also managed to create history of sorts. After Ashish Nehra, he became only the second left-arm pacer in IPL history to complete 100 wickets. Zaheer achieved the feat in his 99th game in the tournament.

Manoj Tiwary s fightback: Tiwary found partners in Smith (38) and Stokes (33), and he himself struck a fine half-century for Rising Pune Supergiant, albeit in a losing cause. Tiwary has been in a fine form this IPL, and once again he played a vital innings for his team. Tiwary made 60 off 45 balls with the help of 5 fours and 3 sixes, and in the final over he even hit 2 sixes to raise a glimmer of hope.

Mohammed Shami does the unthinkable: Shami achieved the extreme rare feat of running out the best batsmen in the business. It is never easy for any fielder to get the better of MS Dhoni when he is running between the wickets, but Shami was lucky to have made a direct hit at the stumps from short fine-leg. However, Shami cannot claim the entire credit as Dhoni was at fault for making a slow start, instead of sprinting towards the other end.

RPS lose the plot: Rising Pune Supergiant have only themselves to blame after the defeat to Delhi Daredevils. Off the final 5 overs, RPS needed 52 more to win and had as many as 7 wickets in hand. But by the final over, the equation had come down to 25 needed off 6 balls, which was too much for them. 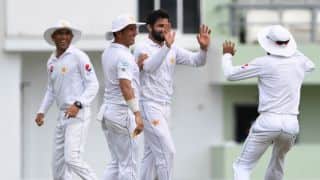 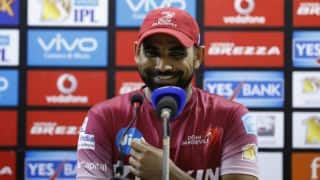