Delhi Daredevils were subjected to an embarrassing 10–wicket loss as Virat Kohli and his men completely outclassed them.

Delhi Daredevils (DD) hosted Royal Challengers Bangalore (RCB) at Feroze Shah Kotla, Delhi but were subjected to an embarrassing 10–wicket loss as Virat Kohli and his men completely outclassed them. Nikhil Popat brings to you the highlights from the game.

Shreyas Iyer’s misfortune: Shreyas Iyer has been the star performer for Delhi Daredevils but he was at the wrong end of a leg-before decision when he was given out off the very first ball he faced today. It was a full one from Mitchell Starc but it was always going down, having even pitched just marginally on leg. The umpire though found the shout legitimate one and gave him out, sadly for DD it was the man in form who suffered the blow. Royal Challengers Bangalore demolish Delhi Daredevils with 10-wicket victory in IPL 2015

Varun Aaron’s twin strike: JP Duminy departed early after a short partnership with Mayank Agarwal but once he got out, Yuvraj Singh came out to bat. But he Varun Aaron forced him to play a rising one outside off and was caught behind. Angelo Mathews coming in failed to get off the mark, fending a short one straight to AB de Villiers at mid-wicket, reducing Delhi to 39 for four in just the seventh over and that almost sealed the game for RCB. BLOG: DD vs RCB IPL 2015 Match 26 at New Delhi

Kedar Jadhav, lone warrior: Coming into bat, facing the hat-trick ball from Varun Aaron, Kedar Jadhav knew the pressure was there on him to get his team to safe total. He left the hat-trick ball well and put his head down to graft an innings while wickets kept falling at the other end. When Starc came in to wrap up the tail, he hit him for two consecutive fours to show his team-mates that the deck was not that bad to bat on. He though failed to get his team past 100 as he holed out to mid-wicket, trying to hit Harshal Patel but found  Starc, who also bowled impressively to take three for 20 in his spell. Delhi were bowled out for 95. Royal Challengers Bangalore bowl Delhi Daredevils out for 95 in IPL 2015

Chris Gayle sets up the win: Chasing a paltry score of 96, Chris Gayle wasted no time to get going. He saw off the first over from Nathan Coulter-Nile but did not hold himself back after that, hitting Dominic Joseph for 14 runs in an over. He kept finding the fence at regular intervals as the Delhi bowlers failed to put any kind of pressure on him. Virat Kohli had an easy job of just giving the strike to Gayle who was going hammer and tongs. Gayle brought up his fifty with a might six off the bowling of Imran Tahir. Royal Challengers Bangalore won the game by 10-wickets and annihilated Delhi. 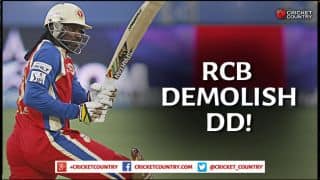