Dhoni will have to fight in the corridors of power of the BCCI. When India won the World Cup back in April, there was a question put to Mahendra Singh Dhoni by the media. He was the leader of the No 1 Test side in the world, he had just won the one-day World Cup after he had won the T20 World Cup in 2007 and the IPL and Champions League for Chennai Super Kings the previous year. What next? Quite frankly, there was nothing left to win. But after the debacle in England, one gets the feeling, that the most important battles of his career are yet to be fought.

And mind you, as important as the series might be, I’m not talking about the series against Australia later in the year or the rematch with the newly-crowned No 1 team England next year. I am talking about the battles Dhoni will have to fight in the corridors of power of the Board of Control for Cricket in India (BCCI) if India have to be a consistently good side in international cricket.

There are many things wrong with the Indian cricket system, and a lot has been written about each of those factors. But most people would agree that given the amount of talent India has, if two of those factors, the team’s schedules and preparation for major tours and tournaments are taken care of, it would solve half of India’s problems. And while good and meticulous preparation can sometimes be an individual pursuit, as Rahul Dravid’s success in England proved, scheduling is the board’s prerogative. And if some sense it to be injected in this aspect of India’s cricket, someone will need to take on the board.

And there is nobody better to do it than the ridiculously over-worked captain. Pull out a list of players who have been on the field for their country and clubs/franchises the most for the last three-four years, and Dhoni would probably be at the top of the list every single year. And this while keeping wickets and captaining all the sides that he plays for. It is a miracle the man hasn’t snapped in half yet, that he can still get back up when he crouches behind the stumps when the bowler starts running in. I can almost imagine him waking up every morning, bleary-eyed, and asking the nearest person, “Who are we playing today? England? Oh, alright then!”

Dhoni is a superstar and, along with Sachin Tendulkar, he can probably take a break whenever he wishes, and walk back into the side whenever he feels good to go again, without really worrying about how well his replacement might do. Not everyone can afford to do so. And even if they could, it is not really the solution, for it goes against the needs of the team, and indeed the wishes of the fans, that the best team should take the field as often as it is possible.

The only reasonable solution is careful scheduling, which treats sportsmen like sportsmen, not mules. It would be naively optimistic to expect the BCCI to realise this themselves, for they are in the business of making money, not running cricket in the country. Duncan Fletcher might be the man to say what needs to be said, but at the end of the day he is an outsider, an employee of the BCCI, and if he tries to dictate terms to them, he would be out of a job quicker than you can say ‘restructuring’. But if the likes of Dhoni and Tendulkar decide to take a stand, even the suits at the BCCI will listen. Using the clout of your position is not always wrong, especially if you use it for the greater good.

The question is: Will Dhoni choose to ruffle those feathers? He could very well say that his job is to do his best on the field with what he has, and that administrative decisions like scheduling are the board’s job, and nobody can fault him for feeling so. But captains sometimes have to do more than toss a coin, place fielders and make bowling changes, especially in the subcontinent. Imran Khan was a cricket board by himself when he led Pakistan. Closer home, Sourav Ganguly took on the board at several junctures, especially when it came to selection matters. He fought tooth and nail for his players, and if not for him, players like Harbhajan Singh, Yuvraj Singh and Zaheer Khan would have had considerably longer roads to the top of international cricket.

Dhoni’s place as one of the greatest captains India has ever had is not in doubt. The blip in England was unfortunate, but he will not be remembered by it. Dhoni’s legacy as an on-field leader is secure, but he has a chance to embellish it even more off the field. As I read in a novel once, he has done well for himself, but now he has a chance to do good. He has won matches, won trophies, he has done well. If he stands up to the BCCI and wins that battle too, he will have done something good for Indian cricket. Whether he chooses to do so, is entirely up to him. 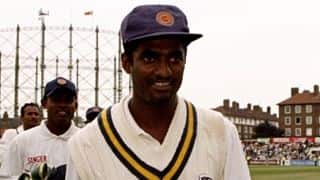 When Muttiah Muralitharan's nine-for destroyed England at The Oval