Duncan Hamilton and Gideon Haigh both mention the story, but how true is it?

Let me begin with Haydon Smith, one of the greatest fast bowlers Leicestershire had produced. Let there be no ambiguity about this: Smith was a very good bowler, especially at First-Class level, and he had 1,076 wickets to show for that. He is one of only six bowlers to have taken over a thousand wickets for Leicestershire.

But none of that is important for this piece. It should suffice to say that Smith was genuinely quick on his day, and never hesitated to hurl the occasional bouncer. While that often fetched him wickets, he had once got a bit too carried away. It was an act so imprudent that Duncan Hamilton wrote in Harold Larwood s biography that Smith should get the first prize for stupidity .

What did Smith do? He liked the look of the Grace Road wicket before a Nottinghamshire match. So he went and announced to his captain (he stammered): I ll tell you what, s-s-skip, I think I ll b-b-bounce one or two.

Now, at this stage Nottinghamshire boasted of Larwood and Bill Voce. Let along in England, they were the most feared pair in the world: they were both very fast and very hostile, and were generous in the use of the bouncer.

Tales of their intimidatory bowling were plenty. For example, Larwood once knocked the turban off the head of Joginder Singh, a member of the 1932 Indian touring party, just to win a bet. Voce, on the other hand, had once bowled a bouncer so vicious that Box Case fell on the wicket and left with a stump instead of the bat.

There were plenty, but this is not the place for that. Let us get back to the captain, who was obviously alarmed: You know who they ve got on the other side? They ve got Larwood and Voce.

But Smith did not listen. He unleashed a bouncer barrage. The inevitable happened. Larwood and Voce ran through the Leicestershire line-up. And when finally Smith emerged, the Nottinghamshire fielders urged Larwood to get back.

What did Larwood do? Larwood s opening ball reared past Smith s face. He didn t see it, but felt the cold air as it rushed past him, wrote Hamilton.

Before the next ball was bowled, Smith had already started to walk away towards the leg-umpire. Larwood bowled straight, Smith stretched his bat out and somehow edged, and the ball flew towards Sam Staples at gully.

That was Hamilton s version. Haigh does not Smith s initial movement, but he mentions the gully nevertheless.

It was a dubious catch, but Smith was already on his way back. At this stage Staples yelled it was a bump ball, I didn t catch it!

But Smith was having none of it. Yes, you f-f-f**king well did, he mumbled as he kept walking.

Was the story true?

Obviously, the scorecard had to be found. It was obviously going to be an intriguing read. I began with what was available:

– The batsman was Smith

– The venue was Grace Road

– Larwood and Voce ran through Leicestershire

It started with a major blow. Smith had fallen to Larwood only twice in his career (I am not talking only First-Class here), and both were at Trent Bridge, not Grace Road.

But maybe the venue was wrongly reported. Perhaps it was at Trent Bridge, after all. So I decided to check the scorecards.

But perhaps this was an error in recording, too. There still was a chance. After all, Nottinghamshire batted first in both matches

Smith bowled in both matches, but obviously the bouncer barrage was not evident from either, so there was nothing extra.

However, there was something: Voce did not play in either match.

But maybe there was an error there too. I looked for Smith c Staples b Larwood but there was none to be found. In both matches Smith was caught by wicketkeeper Ben Lilley.

By now I was losing hope. In a desperate attempt to clutch on to straws, I checked the first match: Smith had come out at 120 for 6 and had scored 34. It seemed really unlikely that he was desperate to leave.

Unfortunately, in the other match, too, he had scored 6 in a low-scoring affair. He came out at 129 for 8 and the ninth wicket fell at 139, so he was definitely out there for some time.

No, it did not happen.

There is another match, from 1932, that I must mention here. Remember, the Bodyline series would begin that winter, elevating Larwood (and to some extent, Voce) to a high but fragile pedestal.

Was this the match where Larwood and Voce avenged Smith s barrage of bouncers? Did the incident really happen, but Voce was the bowler? But then, the story appears in Larwood-centric works, and specifically mentions Larwood

Hamilton s book was named Wisden Book of the Year in 2009. Haigh wrote his piece in Larwood s centenary year (2004). Since two esteemed scholarly figures were made to believe an untrue fact, it is more or less certain that the story was started decades back by a reputed figure.

Of course, it was easier to make it believable for Larwood, given his image of the tragic hero the establishment could never handle. There was no romanticism in Voce s career, so it would not have made a great story

One can only hope it was Neville Cardus that unabashed architect of many a cricket myth that had little to do with the truth. Indeed, one Cardus is enough. Cricket history can do without multiple manipulators of facts. 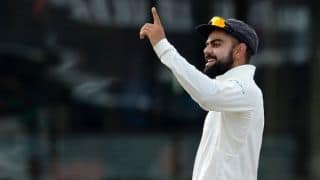 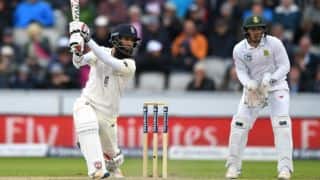