A compact, wristy batsman, Dilip Sardesai was the chief architect of India's first series win in the West Indies.

A compact, wristy batsman, Dilip Sardesai, born August 8, 1940, was the chief architect of India s first series win in the West Indies. Arunabha Sengupta looks back at the career of the Bombay batsman who is one of the seven players who are to be posthumously honoured by BCCI.

The 1970-71 series against West Indies has gone down as a pivotal milestone in the history of Indian cricket. For the first time, the national cricket team overcame a major power in their backyard. And along with it, in the far off lands, there emerged a batsman who would script the dreams of the country for 16 years.

True, with time the epoch-making tour has become synonymous with the rise of Sunil Gavaskar. His 774 runs at 154.80 with four hundreds in the phenomenal series is stuff of legend.

However, the great man himself admitted, “He showed us how to play fast bowling and in doing so gave us the confidence we needed to beat the West Indies. One of his great strengths was that he was always very positive, and he spread that through the team.”

Indeed, Gavaskar did not play the first Test of the tour at Jamaica due to an infected finger nail. And India s start was the familiar tale of an opening Test in a hostile foreign land. Kenia Jayantilal and Abid Ali had departed with just 13 on the board when Sardesai walked in. Very soon, it was 75 for 5 wickets falling in synchronised steps to the age-old script.

But, the Sardesai who walked in that day was a different man from the one who had played 21 previous Tests with very mediocre results. And this new and improved version of the batsman would stand like a wall against the West Indian bowling for the next couple of months. That day, he stemmed the collapse by batting nearly 8 hours, adding 137 runs with Eknath Solkar and 122 with EAS Prasanna. He was ninth out at 382 after compiling an epic 212, with 17 fours and a six.

The initiative had swung back. And in that match affected by rain, Ajit Wadekar invoked the follow-on rule for a curtailed match and surprised Garry Sobers by asking him to bat again as India led by 170.

The second Test stands as a multi-faceted landmark in Indian cricket. Gavaskar made his debut and India won by seven wickets. The Little Master did start off in style, with 65 and 67 not out. Yet, many forget that the platform for the victory was built around a solid 112 by Sardesai, which ensured that India secured a match winning lead in the first innings.

At Georgetown, Gavaskar started his saga of centuries and Sardesai took a short break with just 45 as the match ended in a draw.

In the fourth Test at Bridgetown, Barbados, West Indies piled up 501 for five and in reply India collapsed to 70 for 6 in response, Gavaskar falling cheaply for a change. And yet again, Sardesai was unruffled and steady. The man who seemed to have undergone a rebirth essayed yet another miraculous rescue act, adding 186 with Solkar, and 62 with last man Bishan Singh Bedi. The Bombay batsman was the last out for 150, made in 6 hours, saving the follow-on in the process. And in the second innings Gavaskar scored a century to ensure that West Indies could not clinch a win on the last day.

The final Test was all Gavaskar, who scored 124 and 220, as West Indies somehow scraped through with a draw. Sardesai compiled a patient 75 in the first innings.

According to D Govindraj, who toured with the Indian team, Gavaskar was of course superb, but he was dropped early in every innings. The chief architect of the victory was Sardesai , consistently brilliant, composed and solid as a rock.

The 642 runs at 80.25 runs with 3 centuries bear testimony to his contribution to this pioneering triumph.

And to think that Sardesai might not have made the tour but for captain Ajit Wadekar s insistence.

Indeed, while his technique and wristy proficiency were never in doubt, Sardesai spent many of his cricketing years without cementing his place in the side.

Having made his First-class debut with an impressive 87 for Indian Universities against the visiting Pakistanis in 1960, he fought his way into the star-studded Bombay side.

He made his Test debut a year later against England at Kanpur, and scored 28 before being hit wicket to Tony Lock.

This was followed by the tour to West Indies in 1961-62, and Sardesai had a disappointing time as did most of the Indian party.

Back home he did enjoy a good series against England, scoring five half centuries in as many Tests, but a string of low scores against Australia as an opening batsman and then failure in first Test against New Zealand saw him omitted from the side.

Brought back for the third Test, he was understandably under pressure. A measly four in the first innings as India collapsed to 88 and followed on did not really help his cause.

When he batted again, perhaps his last chance to hold on to his place in Tests, fortune took up his cause. Missed at 20, he batted on for 548 minutes to save the match and remain unbeaten on 200. It was his first Test century in his 14th match. He immediately scored another in the next Test, a hard-hitting 106 in a winning cause, demonstrating that he could make quick runs when needed.

However, failures against West Indies and England followed at home and 18 runs in four innings in Australia in 1967-68 ensured that he was axed again.

Brought back when Australia visited again in 1968-69, he managed just 20 and three as India stumbled to defeat and lost his place yet again. The man who replaced him began with a duck and followed it up with 137 runs in the second innings. With the advent of the artistic genius of Gundappa Viswanath, and his own credentials as an opening batsman placed under scrutiny, it did seem like curtains for Sardesai.

However, he had the confidence of his Bombay captain. Ajit Wadekar was clear that he wanted Sardesai s experience on the difficult tour of the Caribbean,. The selectors relented in spite of doubts, and he was used as a middle order batsman. The rest is history.

Incredibly, Sardesai did not play much longer. He did not manage to carry on in the same vein when India toured England the following summer, but he did play a crucial role in the Test victory at The Oval. As nerves faltered, nails were chewed raw and knuckles were cracked to the limits, Sardesai compiled a cool 54 in the first innings and followed it up with 40 in the second to guide the team to their second amazing series win on the trot.

Surprisingly, he played just one more Test after that, scoring 12 and 10 against England at Delhi. At the end of the 1972-73 season, Sardesai retired at a youthful 32.

In retrospect his career was lopsided, with all his hundreds scored in just two series, with strings of low scores in between. His claim to fame remains the incredible run in the series in West Indies.

A total of 2001 runs at 39.23 in 30 Tests with 5 hundreds may not be remarkable, but he will be remembered as the architect of the first great overseas series win achieved by the country.

He ended his career with another unbelievable record: across 13 seasons, Bombay never lost a single Ranji Trophy match with Sardesai in the side. 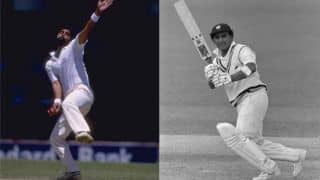