On December 16, 1927, Don Bradman made his First-Class debut in a thriller of a match against South Australia.

December 16, 1927. Bradman made his First-Class debut in a thriller of a match against South Australia. In this series, Arunabha Sengupta lists several firsts of Bradman s career.

A last-minute inclusion into the New South Wales XII for the southern tour, Don Bradman was not at all sure whether he would get a look in. In fact, as the only member of the twelve who had not played a First-Class match, he fully expected to carry drinks.

He did play the warm-up game against the Barrier District team at Broken Hill, but that was because Archie Jackson developed a boil on his knee. Bradman scored 46 from No. 4 while batting in civilian shoes. Yet, he was still not certain that he would be in the playing eleven at Adelaide. ALSO READ: Don Bradman Firsts Part 1: Don Bradman plays for the Shield side for the first time in his civilian shoes

Nevertheless, the days were full of new experiences. When they left Broken Hill for Adelaide on the evening of December 14, Bradman spent his first night on a train. That was also the first time he ventured out of New South Wales. ALSO READ: Don Bradman Firsts Part 3: Don Bradman run up to the first Test

At around 10.30 the next morning, for the first time Bradman saw Adelaide, which was to be his home for most of his life. ALSO READ: Don Bradman Firsts Part 4: His disappointing Test debut

That same day Jackson spent hours treating the boil but it showed no signs of healing. Hence, on December 16, 1927, Bradman made his First-Class debut against South Australia at Adelaide Oval.

There were some advantages. The pitch was true and hard, and the visiting batsmen made an excellent start. Norbert Phillips got a hundred and skipper Alan Kippax was showing excellent touch before he retired ill. When Bradman walked in shortly before tea, things were not that easy. With Kippax indisposed, the New South Wales team were effectively 250 for 5. Clarrie Grimmett, the wily gnome-like leg-spinning genius, was into his groove and had just dismissed Bert Oldfield. Besides, Bradman himself was suffering from an injured finger.

At the other end was Albert Scanes, the Sydney-based cake-maker. Like Bradman, Scanes had been a last-minute replacement for the tour after Jack Gregory and Hammy Love had declared themselves unavailable for the tour.

The young Bradman looked around the field and took guard. This was going to be the first of his many duels with Grimmett. He opened his account with a fierce pull off the leg-spinner to the mid-wicket fence. That was the first of the approximately 3000 boundaries in his First-Class career. In the same over, another boundary followed.

Henry Whitfield was on at the other end, and the others in the bowling line-up included John Scortt, Norman Williams and Perker Lee. It was a strong attack, the name of Grimmett making it formidable, but the 19-year-old Bowral boy showed no signs of nerves.

The fifty was brought up shortly after tea, in just 67 minutes. He lost Scanes after a partnership of 48. Kippax returned to bat again, but had to retire from yet another attack of sunstroke. The sun was beating down. By the end of the day, Bradman had slowed down in his rate of scoring, finishing unbeaten on 65 unbeaten. The score on 400 for 7.

The following morning, Kippax returned and became the first man to put on a century partnership with Bradman. There would be 164 such partnerships in The Don s First-Class career, and Kippax would share 15 of them. The stand that day was built on the same ingredients that would be seen together so often in the years that followed the grace of Kippax and the controlled efficiency of Bradman.

After two hours 41 minutes at the wicket, Bradman pulled Lee to the fine-leg boundary to bring up his first century. He became the 20th Australian to score a hundred on First-Class debut.

The partnership amounted to 111 before Kippax fell. Bradman was last out, just before lunch, cutting Scott to gully. His 118 had come in three hours eight minutes, and contained eight boundaries. The way he used his feet to Grimmett impressed one and all. The special representative from the Sydney Morning Herald wrote that the cut to which he perished was his weakest, before adding, But the rapidity of his advance from the matting wicket standard he as accustomed to only a season ago leaves no room for doubt that he will acquire an all-round mastery at no distant date.

The match followed a spectacular path. In response to the enormous 519 amassed by New South Wales, Karl Schneider s century and Vic Richardson s 80, aided by useful scores by almost every batsman, enabled the hosts to keep the deficit down to 38. In the second innings, Grimmett got grip and turn. The visiting batsmen had few answers. Bradman, still nursing the injured finger, went in just before lunch on the final day with the score on 61 for 4. He added 65 with Gordon Morgan in the only real stand of the innings before being bowled by Grimmett off his pad. He scored 33, losing his wicket to The Gnome for the first time.

Requiring 189 to win in the final innings against the medium-pace of Ray McNamee and the leg-spin of Arthur Mailey, South Australia squeezed home with one wicket to spare. 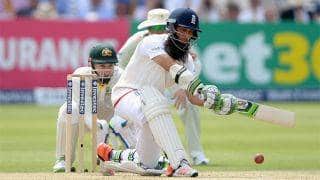