Derbyshire stalwart Donald Carr was the first Test cricketer born in Germany, the first captain to lose a Test to India, ran into controversies by abducting an umpire, and played a stellar role as administrator during the Basil D’Oliveira turmoil, Kerry Packer’s World Series, and the South African rebel tours.

History will remember Donald Carr more as an administrator than as a cricketer. Carr played only two Tests, and did not do too poorly. Unfortunately, he stood in for Nigel Howard in the second of these, at Madras, and had the misfortune of becoming the first captain from any country to lose a Test against India. Carr scored 14, 76, 40, and 5, and claimed 2 wickets from his 2 outings: while he did not exactly take the world by storm, he probably deserved more chances. However, he peaked in the 1950s, which was probably England’s strongest decade in the previous century; he was not good enough to displace some of England’s all-time greats.

Carr was first the cricketer born in Germany (Paul Terry is the only other one till date), and the second in mainland Europe (after ‘Buster’ Nupen, Norway). His father John, born in Tamil Nadu, was in The British Army, and even played for MCC. Donald’s elder brothers Douglas and David also played cricket at various levels in Derbyshire, but could never make it to the First-Class level.

He played 446 First-Class matches, 336 of which were for Derbyshire. While his gutsy batting fetched him 19,257 runs at 29, his left-arm spin amounted to 328 wickets at 35. An outstanding close-in fielder, he also took 500 catches. His 404 catches for Derbyshire have been bettered by only Derek Morgan.

He also led Derbyshire in 226 of these matches. His finest performance with bat also came in that season, against Kent, when he scored 156 (in a team total of 257) and 109 (out of 191), also taking two wickets. He scored 2,165 runs for Derbyshire that season — still a record for the county.

In 1960 he was named Wisden Cricketer of the Year. By that time he was already Secretary of Derbyshire CCC.

Unfortunately, despite having a decent (if not impressive) career, Carr the cricketer career will be forever linked to the Idris Begh incident of 1955-56. Begh was probably not the most unbiased umpire in history (Omar Kuerishi called him Pakistan’s “secret weapon”), but he was certainly Pakistan’s foremost umpire of the era.

But Carr’s men, who were out there for an unofficial ‘Test’ series, should have shown more restraint. The series was significant in more ways than one, for the experience would help stalwarts like Ken Barrington, Brian Close, Fred Titmus, and Tony Lock. Also in the party was the wonderfully named William Herbert Hobbs Sutcliffe, son of the Yorkshire master.

Unfortunately, Carr and his men got a bit too carried away after some decisions that did not go their way. So a group, presumably under the influence of alcohol, knocked on the door of Begh’s hotel room brandishing water pistols; they abducted Begh in a tonga; the rest of the evening was, well, not one hundred per cent non-violent.

Several telegrams were exchanged between MCC and the Pakistan Board. MCC held Carr, captain of the side, responsible, but he was not penalised.

Carr became MCC Secretary in 1962, holding the post for 12 years. He was also TCCB Secretary from 1973 to 1986. These were tumultuous times for England cricket, which he handled with supreme efficiency.

He was responsible for, for example, the committee that left out Basil D’Oliveira before including him — and indirectly leading to South Africa’s ban from sport. He also stood firm during Kerry Packer’s World Series Cricket, never letting England cricket lose focus; neither did he let things go overboard during the South African rebel tours.

He was later appointed an ICC match referee, officiating in the early 1990s. 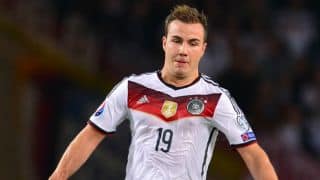 Euro 2016, Germany vs Ukraine, Live Streaming, Match 7, Group C: Watch Live telecast of GER vs UKR on Sony SIX at 00.30am in India England vs Sri Lanka 2016: SL protest after umpiring howler denies them wicket on Day 4 of 3rd Test at Lord's