MANCHESTER: The Emirates Old Trafford, home to the famous Lancashire Cricket Club has had some terrific signings over the last few decades. From World Cup winning captain Clive Lloyd and Michael Holding in the 1970s and 80s to the likes of Wasim Akram, Mike Atherton and Andrew Flintoff in the 90s. Spin wizard Muttiah Muralitharan joined the club around the turn of the new millennium, which further opened the door for a plethora of big names to join in. James Anderson, Shivnarine Chanderpaul, Nathan Astle, Carl Hooper, Faf du Plessis it’s a list boasting some highly-talented individuals.

But when it comes to the club’s equation with India and its cricketers, it’s one filled with a range of emotions. Before we delve into it though, here’s a little back drop. India’s relationship with county cricket, let alone Lancashire, has longed for consistency. Contrary to the early 60, 70s and 80s, when Sunil Gavaskar, Dilip Vengsarkar, Kapil Dev, Mohinder Amarnath and others featured across the county cricket scenes, the number dropped considerably between 2000 and 2012 and it wasn’t until the current crop of cricketers came along that India revived its connection with county cricket.

Lancashire, in particular has witnessed very little Indian participation. In fact, just five players who went on to play top-level cricket for India. Among them, Murali Karthik and Dinesh Mongia featured for just one season, but the remaining three Farokh Engineer, Sourav Ganguly and VVS Laxman shared extremely distinctive relationships with the club. ALSO READ: Manchester’s united safari of cricket and football

Ask anyone at the Old Trafford who the most influential Indian cricketer at LCC was, the name Farokh Engineer is almost instinctive. Engineer’s bonding with the club was extremely renowned and incredibly cordial. A lot of it owed to the fact that he settled in England in the late 60s, and as per the players and fans of the club, became a Lancashire’ite’.

“Quite a few players played in the Lancashire league but in terms of the county club, I’ll be going with Farokh Engineer. The very fact that he became a Englishman by default. He lived in England and he just loved Lancashire really. He’s been the most respondent because of the length of time he’s been here really. With him, Lancashire won all the limited-overs Cup and the team reached unprecedented heights,” says Malcolm Lorimer, Engineer s friend and historian of the club.

“It (the team) was pretty average really, but with Farokh and Clive Lloyd, it picked up. In the 60s when countys could have just one overseas player, Lancashire was going to get Gary Sobers actually, but they got Farokh. He recommended Clive Lloyd and with these two, Lancashire cricket really came into its elements in the one-day format. We didn’t win the County championships but did well in the One-Day League. He really transformed the club and with those two, we became the best one-day-side really.”

Once Engineer left the club, Lancashire had to wait for almost 25 years to seal a big Indian signing none other than former India captain Sourav Ganguly. In the year 2000, with Ganguly appointed captain of India, taking over from Sachin Tendulkar he was recommended to Lancashire by Australian Bob Simpson, a consultant with the Indian team during the World Cup in England the same year.

Ganguly’s first taste of county cricket was mixed. In the four day games, he managed 671 runs from 21 innings at an average of 31.95, with six half-centuries and a highest score of 99. The Benson and Hedges Cup was forgettable with just 62 runs in six innings, but in the National League and the Natwest Trophy, the former India captain was in imperious form. In 13 innings, Ganguly reeled off 569 runs, with an average of nearly 52, and stretched in to 100 in three Natwest innings after scoring 200 runs with a best of 135 not out.

However, history has it that Ganguly found the going of his first county stint tough. There were major concerns within the club regarding his attitude and Lorimer explains how the players, support staff and coaches struggled to get Ganguly on the same page. ALSO READ: The mystery of 250000 that changed fortunes of little Hoveringham CC

“Lancashire had a strong side when Sourav came in. Mike Atherton was still around. He found it difficult to fit in the team, probably because he felt he was a big star coming to Lancashire,” Lorimer says.

“I’ll give you an instance. When he came, he was practicing in the nets and the ball hit him on his hand, not very hard. And immediately, he dropped the bat and said I’m going now. I can’t carry on any more. The rest of the people were simply baffled. Because he was such a big star in India, it was almost as if he wanted people to carry his kit. But for players here, not only was he not regarded a star, teammates felt he wasn’t really an integral part. A lot of people felt Sourav played for his own glory. Once he scored a century and raised the bat towards the dressing room, only to not find a single player in sight.”

The cold relations Ganguly and the club endured was famously explained by former England allrounder Flintoff, who shared the dressing room with the former India captain. As per his biography Being Freddie, Flintoff, in an extract, had mentioned how Ganguly simply wouldn’t work out and how it was a struggle with him. The year he mentions is 2000-2001, which probably explains Flintoff taking his shirt off when England beat India at Wankhede to finish the series 3-3 before Ganguly retaliated by swinging his jersey from the Lord’s balcony when India famously defeated England during the 2002 Natwest Trophy final, the winning runs scored off none other than Flintoff.

“Flintoff and Sourav did not get along. Flintoff felt that Sourav saw himself as a superstar. And that’s why he and rest of the players wouldn’t probably warm-up to him. And even didn’t make much effort with the team,” Lorimer adds.

As it turns out, Flintoff wasn’t the only player who struggled to get along with Ganguly. Gary Yates, a former Lancashire off-spinner, also part of the team back then recalled how Ganguly mostly kept to himself and showed no eagerness to fit in the side. Yates, currently an academy director of Lancashire CC, has been with the club since 1987. A right-arm offspinner, Yates had his best days in the 90s, where he excelled mostly in the one-dayers but lost his place in the side once Muralitharan signed with the club.

“It’s quite interesting because we were all very excited when he signed for us. He was the captain of India, a bog signing. Statistically he was very good. But we did experience that with Sourav. We found that he didn’t really get on as well in a team environment as we thought he might,” Yates says.

“He kept to himself and came across as a very individual-eyed person. I don’t think he really mixed well with the guys, which became a little bit of an issue with time. We wanted him to be a bit more involved. But that’s the way he was.

“There was a bit of it in the way he played. We wanted him to be flexible in terms of the team composition and the batting order but it never felt as if we’d got that from him. The quality was there but the equation was missing.”

Once his playing career was effectively over, Yates turned to coaching. In 2006, he qualified for Level 4 coach and four years ago, took charge of the academy. Currently, Yates looks after the 10 nets bowlers who have been helping international cricketers during their practice sessions ahead of World Cup games.

He recalls how after Ganguly, Lancashire signed Mongia in 2004 and Kartik a year later, but neither could do much. The one who came next however, Yates holds him in high regard.

Laxman joined Lancashire in 2007 and scored 541 runs in eight matches, but his next stint in 2009 was his first full season with a county. By the time Laxman came around, Yates had pretty much entered the coaching scene and was highly impressed with the former Indian batsman’s work ethic.

“I fed a lot to him through the machines. The thing I remember the most about VVS were the way he trained. Not the most athletically gifted player but way he trained for me was outstanding. He would always use the machine, knock the softballs, he would put it on high swings. He liked to be challenged all the time. He made the balls soft so he had to play them late,” Yates remembers.

“We always felt that he was the best player of spin that ever came to Lancashire. We loved his ability to play spin; he was able to play out in front of himself, great wrists, and some of the guys used to idolise him. He had a very gentle nature, very warming, very keen to give out information to help the players improve. He was great to have around and was a really good influence on the team. He did very well for us.”

Yates narrates an incident where Laxman’s influence almost led Lancashire to what would have been the club’s all-time high.

“In 2007, we went to the Oval knowing that if we win the game, we would win the County championship outright for the first time ever. Ultimately, we had to chase over 400 on the last day to win the game against Surrey. VVS wasn’t the captain but he gave us a speech prior to the start of the last day’s play. It gave everybody real belief that we could win that game. He scored a 50-something in the first innings and got a 100 in the next. It was a tremendous innings but eventually we fell 24 runs short,” Yates recalls.

“We went in at tea, still having a chance. Players were feeling the pressure a bit. This was an opportunity that didn’t come along very often for Lancashire. His speech was full of warmth and belief that we can do it.

“What was so memorable was that players were in tears by the end of the day. We had the likes of Dominic Cork, Stuart Law but people’s emotions just got the better of them. They are very fond memories. He was completely different. He gave himself to the team and was pretty much a team player. He put himself out of the team. The thing with cricket is that it’s not just about going out and scoring runs. It’s about whether you’re willing to put yourself out for the team, and that’s what VVS did.”

Yates is now 51 and doesn’t intend to continue with coaching for long. He hopes to see another Indian signing for Lancashire pretty soon, though he is aware that Cheteshwar Pujara, Ajinkya Rahane and R Ashwin have signed for Yorkshire, Hampshire and Nottinghamshire respectively. Just when he is about to head towards the academy boys, it starts to drizzle.

“Ah, well I’m sure we’ll have an Indian signing, at least before this bloody rain stops in England.” 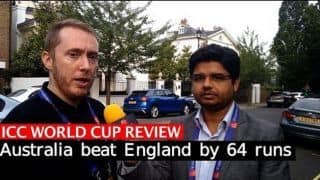