It will take a lot of pain for England to come out of this black hole that they find themselves in.

Ever since being thumped by Australia 5-0 in their own den, England have been on a downhill path. England touched the nadir when they lost to a decent Sri Lankan outfit in their own den. Bharath Ramaraj looks at how can England resurrect their fortunes.

In the harsh world of sport, we have seen tales of blood, sweat, toil and tears that helps a sportsman to script a memorable journey and taste the eternal glory of success. However, there are also occasions when despite showing nerves of steel, you sink right at the last minute in the midst of a titanic battle. With two balls for England to escape with a draw against Sri Lanka at Headingley, Moeen Ali, the centurion, and James Anderson seemed to have pulled off a coup de theatre act.

However, with one ball to spare, Anderson lost his wicket to a fine short delivery targeted at his ribs by Shaminda Eranga. He was crestfallen and heartbroken, after battling so hard for so long. It was a travesty that Moeen after playing with poise and fluidity ended up on the losing side.

So, with yet another heart-wrenching series loss — and against a setup that they were expected to beat easily at home — can English cricket lift itself from the doom and gloom? The harsh reality is there are occasions when nothing goes right and there doesn’t seem to be any light at the end of what feels like a very long and never-ending tunnel. At present, Alastair Cook, the England skipper must be feeling the same.

Here was a cricketer who was on the top of the world after England beat India in their own den after decades of misery, and then retained the Ashes series in 2013. But those nuclear warheads from Mitchell Johnson seemed to have taken the wind out of the Cook-led England team. It has to be remembered that for different reasons, England don’t have Graeme Swann, Kevin Pietersen and Jonathan Trott with them. All three were redoubtable cricketers, who helped England to reach the pinnacle of Test rankings.

In such a situation, the burden falls on the shoulders of the captain. In some ways, it is unfair to criticise Cook for all that has gone wrong, as it is finally a team game. But with Cook, he doesn’t come across as someone who is assertive. He tends to go on the defensive soon and you don’t see that gambling instinct with him.

For instance, in the Test match played against Sri Lanka at Headingley, Cook could have gone for the jugular and introduced Moeen earlier into the attack. A part-timer can always prove to be useful, as shown by the astute Mark Taylor during his time as Australian captain. In the first Test, Cook could have been assertive and declared earlier.  In the end, Sri Lanka escaped by the skin of their teeth with nine wickets down in the second innings.

England’s bowlers too didn’t bowl the right lengths on a deck where they needed to bowl full (the trademark Headingley length). Here, Peter Moores may have to take his fair share of the blame, as even during his first tenure as the coach, it seemed like the he was hell bent on using the short ball as a tactic on a slow Chennai track against India. India chased down 387 in the final innings, and England lost the game.

It will take a lot of pain for England to come out of this black hole that they find themselves in. They need to select a group of players and give them a long run. England need to find a replacement for Anderson, who won’t be around forever. The onus is on Cook and the England think-tank to show that long-term vision which has been lacking in recent times. 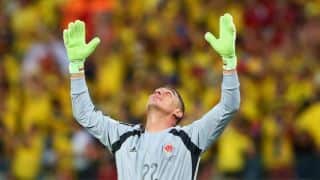