With England leading the series, 1-0 South Africa came out with all their might.

With England leading the series, 1-0 South Africa came out with all their might. Winning the toss, AB de Villiers asked Eoin Morgan and Co. to put bat under seaming friendly conditions at The Rose Bowl, Southampton in the second One-Day International (ODI). The match had its ups and downs from superb batsmen-ship to inspiring bowling as the fans were treated to a roller-coaster ride of emotions. In the end it was the home side that prevailed the visitors by mere 2-runs to take the series 2-0, with one match remaining on Monday. Let us have a look into what all transpired on a fateful Saturday evening in Southampton. FULL CRICKET SCORECARD: England vs South Africa 2017 2nd ODI at Southampton

Kagiso Rabada s opening surge: Rabada s show in the first ODI was rather disappointing. Come Southampton and overcast conditions Rabada made it count. His ability to swing the ball both ways was a highlight for all to pleasure. Rabada s wicket of Alex Hales was the prime example of this. Hales trying to play across the line was beaten by sheer pace off an incoming yorker.

Joe Root s run out: After the fall of Jason Roy, Joe Root came in and held England s innings together. Root who looked calm and composure in the middle was out for no fault of his. Eoin Morgan struck a booming straight drive that took the bowlers’ fingers and jammed into the non-strikers end stumps. Sadly for English fans, Root was a few yards out of his crease. FULL CRICKET UPDATES: England vs South Africa 2017 2nd ODI at Southampton

Eoin Morgan-Ben Stokes vital 4th wicket stand: With their side on back foot, Morgan and Stokes played out an impeccable spell by the South Africa. Even though Stokes was lucky to survive twice on back-to-back deliveries, he continued to march on. Taking the aerial route on more occasion than once. On the other hand, Morgan played almost a Zen-like innings, with hardly any chances.

The pair added 95 runs for the fourth wicket before Morgan fell on the score of 45.

Jos Buttler s whirlwind knock: Jos Buttler was yet to announce himself in the series took the perfect opportunity in the second ODI. With the platform set and Ben Stokes going great guns, Buttler pulled his arsenal of shots against the likes of AndilePhehlukwayo and Chris Morris. Phehlukwayo suffered the most giving 27 runs off 18. AB de Villiers unmoved by ball-tampering row during 2nd ODI vs England

Quinton de Kock s return to form: Coming into international cricket after a long-injury layoff is not easy. De Kock, who failed in the first ODI, took his time in the middle to bring back some of his lost form. Opening the innings for South Africa, de Kock showed exemplary temperament in the middle, playing with caution and brutes.

He reached his 13th ODI fifty in 52-balls. De Kock s presence in the middle allowed the likes of AB de Villiers and David Miller to get their eye in. Stokes hopes ENG to carry form into Champions Trophy 2017

David Miller-Chris Morris sresistance:After the fall of Farhaan Beherdien, Chris Morris came out in the middle to support the one-man army David Miller. Miller who had a poor IPL struck it out in the middle and took his merry time to get back into the thick of things. His knock kept South Africa in hunt but he too needed support from the other end.

Morris known for his explosiveness batting played with fearless approach, which enabled South Africa just runs away from a victory. While Miller remained unbeaten 51-ball 71, Morris was not out on 36 off 22 balls. The pair added 62 off 63 deliveries.

England were almost on the verge of a defeat as South Africa need just 7 runs off the final 6 balls. Mark Wood who was expensive early on was entrusted with the responsibility against an in form Miller and Morris.

SINGLE. Wood s first ball saw Miller pull the ball on the leg side for a single to bring Morris on strike. Remember Morris has already smacked a six and a four off Wood in the 48th over.

SINGLE. Another shot-ball pulled straight to the fielder.

DOT! Wood follows the batsmen and Miller misses the ball.

SINGLE. Miller connects with the hook shot but see it go straight to the square leg fielder.

DOT. Yet another short-ball away from Morris s reach; he tries for the pull and misses.

SINGLE. Back of the length delivery that Morris managed just an inside edge for a single on the off.

England snatch a win from the jaws of defeat and win the match by 2 runs. 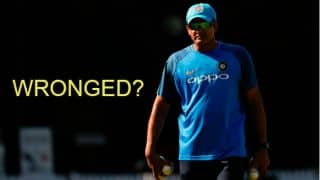 Anil Kumble does not deserve this kind of treatment: Lodha Committee