Unlike his team-mates, Alastair Cook looked relaxed - mentally and physically - during the Ahmedabad Test. His anxiety level was well in control, and that helped him in judging line and length quite early. That, in turn, helped him in his decision making and decisive footwork. 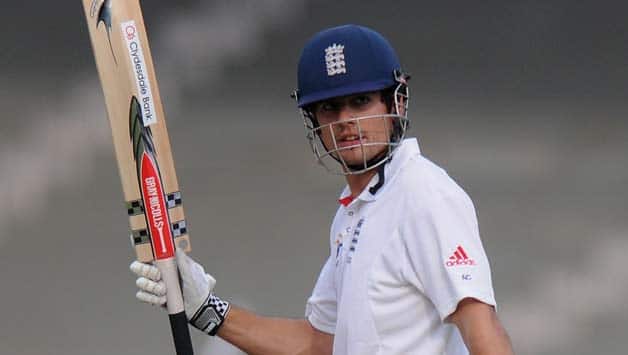 Unlike his team-mates, Alastair Cook looked relaxed — mentally and physically — during the Ahmedabad Test. His anxiety level was well in control, and that helped him in judging the line and length quite early. That, in turn, helped him in his decision making and decisive footwork. Cook was sure of his defence and the hovering close-in field was no distraction for him. He made one mistake and was dismissed by a clever piece of variation by Ravichandran Ashwin, who was backed by runs on the board and was unafraid to toss the ball and challenge the batsmen.

Most of the other English batsmen were unsure of their defence against Pragyan Ojha and Ashwin on a turning pitch, and the close-in fielders seemed like demons heightening their anxiety levels. An over-anxious state of mind and a pounding heart makes it difficult to relax mentally and physically, and that clouded the judgement of the English batting in picking the line and length and shot selection.

The method employed by  Kevin Pietersen and Ian Bell in the first innings pressed the panic button, from which England could not recover. Their way of dealing with spinners may work on good pitches, but more often than not it will lead to failure on turners. They need to watch videos of Cheteshwar Pujara, captain Cook and Matt Prior at the earliest to learn how to successfully deal with spinners in Indian conditions to help their team bounce back in the series.

Yuvraj Singh is another good example to follow. His body language looked great to me. He looked a different player than he was before his illness. He seems to be more determined and appeared to be on his way to becoming a good Test player. Yuvraj must not lose sight of the fact that 20 years down the line, people will remember him for his Test exploits and not the ones in one-day cricket. At the moment he looks in great touch and very focused.

India have tasted first blood by winning the Ahmedabad Test and will not show any mercy in rubbing salt on the English wounds in Mumbai.

Instead of using soft hands while defending the spinners, I was surprised to see that most of the English batsmen were jabbing at the ball and helping the edge carry off the pads into the hands of close-in catchers. A batsman jabs at the ball when the upper body is not moving forward with the front foot while playing a defensive stroke. Hence, the impact is in front of their head rather than under the head. When the spinner tosses the ball above the eye level of the batsman, the batsman lifts his head to watch the flight of the ball, judging the line and length and deciding to defend the delivery by planting his front foot forward. The lifting of the head makes it difficult for him to get his head over the impact and thus gropes for the spinning ball in defence.

I think the English batsmen have forgotten the basics of facing tossed-up deliveries; one just needs to lift the eyes to follow the flight of the ball, while keeping the head still.

All credit to the Indian bowlers, especially Ojha, who looks to be the most improved bowler — bowling slower, allowing the ball to spin in the air and dip. He is willing to toss the ball and intelligently varies his pace. This has paid him rich dividends.

Ashwin bowled well in the first innings, but he got entangled in too many gimmickry variations, instead of keeping things simple as his partner did. He has the makings of a good off-spinner, but has to learn to have patience. He must remember the adage: ‘Bowl well; wickets will follow.’ I do appreciate that certain things are learned only through experience, but a smart cricketer will use others’ experiences to stay ahead – in this case Ojha’s.

England fought well in the second innings, but captain MS Dhoni used his resources well, showing faith in his pacers to pick wickets on that slow turner. Hats off to Zaheer Khan and Umesh Yadav! Both lived up to their captain’s expectations. They shrewdly used reverse swing to pick wickets, both bowling better than the English fast bowlers. Well done, India! Keep up the good work and enjoy the ride.

As the Mumbai Test draws closer, pitch talk will heighten. Dhoni has faced some flak for his comment on how Indian pitches should be from Day One. He chose to speak to the media, which I don’t think is a good idea. A quiet word with the groundsmen would have been a better option.