The South African, liked the contemporaries of his time, missed out during his prime.

Eric Simons, born on March 9, 1962, was an effective all-rounder from South Africa who missed out on international cricket during his prime. However, he did get to play 23 One-Day Internationals (ODIs) once South Africa were readmitted. After his playing career, he has become a renowned coach. Nishad Pai Vaidya looks at Simons’s career.

Eric Simons is one player who missed out on international cricket during his prime. Like most of his compatriots, it was because of South Africa’s sporting isolation and by the time he got a chance to represent his country, he was already in his 30s. Nevertheless, Simons would consider himself fortunate to have played 23 One-Day Internationals (ODIs) in the mid-nineties. At times, it is easy to forget that he did play international cricket, for he has gone on to become a reputed coach who has now worked with different sides and gained a lot of experience.

Born on March 9, 1962 in Cape Town, Simons began his competitive cricket when he represented the Western Province Colts at the age of 17. Two years down the line, he made his First-Class debut for Western Province B. He did shift to Northern Transvaal for the 1984-85 season, but then moved back to Western Province. For a major part of his career, he was a more potent bowler. His medium-pace was consistent and he did boast of a good record then. In fact, in the season he moved to Northern Transvaal, he took 51  wickets at 16.84.

With the consistent performances in domestic cricket in two back-to-back seasons, Simons was picked for the South African side that faced an Australian team that toured in 1985. While playing for the South African Board President’s XI, he did get his 100th First-Class wicket. Mike Haysman was the victim on that occasion. He did play one more game, but thereafter he was only restricted to domestic cricket. His next appearance against a major international side came when the Indians toured in 1992, the first team to visit the country after South Africa’s readmission.

While Simons bowling hadn’t shown the same spike as it did during the early years, his batting had improved considerably and he was recording fifties in domestic First-Class cricket. Thus, by then, he had become more of an all-rounder. Then in January 1994, he smashed 88 in a game against England A and a month down the line, he made his international debut. Making his ODI debut in a game that is more famous for Hansie Cronje’s remarkable ton against Australia, Simons took two for 29 in a tight victory. In 10 overs, he held his figures together and also went on to take the wickets of Dean Jones and Mark Waugh.

Simons remained a part of the South African one-day setup for a year. In the Mandela Trophy, he did play a crucial role in the South African triumph, taking 12 wickets in the tournament. Six of those wickets came in the two finals. His best figures in ODIs came in the first final as his four for 42 did not leave Pakistan a chance to chase the score. However, after the second final of the Mandela Trophy, Simons only played three more ODIs in a tri-nation tournament in New Zealand in 1995. In 23 matches, he had taken 33 wickets at an average of 24.54. He did not do much with the bat as he could only score 217 runs at 15.50 with a best of 24.

Simons continued to represent Western Province until his retirement in 1999. In fact, he also regained a bit of his bowling mojo. In his final season, he averaged only about 14 with the ball. But once he retired, he took up coaching and was at the helm for his state side.

Simons became a respected coach and South Africa called him up for the top job in 2002. He took over a side that was led by Shaun Pollock and had numerous match-winners. Yet, his tenure did see a few disappointments. The failure to make it through to the second round of the ICC World Cup 2003 at home was perhaps the biggest heartbreak. In the aftermath of that phase, Simons oversaw Graeme Smith’s early time as captain. While South Africa did have a few encouraging results, a terrible tour to Sri Lanka in 2004 saw him move out of the job in late 2004.

Years later, in January 2010, India appointed Simons as a bowling consultant. He went on to become the bowling coach and formed a vital part of the Gary Kirsten-led think tank. And, ultimately, that team did go on to lift the ICC World Cup 2011. During that tournament, the Indian bowling peaked when it mattered the most and Simons was given credit for his work. However, in the following months, Indian cricket faced tough times and by the time India finished their tour to Australia in 2012, Simons was on his way out. Joe Dawes took his place.

In 2010, Simons took up the job of Assistant coach of the Delhi Daredevils. He became the head coach for the 2012 season and was there in their setup in 2013. Now, he would combine with Kirsten yet again in 2014 as Delhi aims for glory. 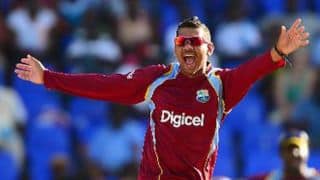