As cricket-obsessed fans, we are hooked to following certain teams, and our cricketing heroes 24/7. The entire city gears up before every high voltage clash with a sizzle of anticipation and an unmatched excitement. Cricket fans tend to throng the stadium in big numbers by braving the heavy traffic, the horn-honking and the scorching sun to watch their heroes perform. 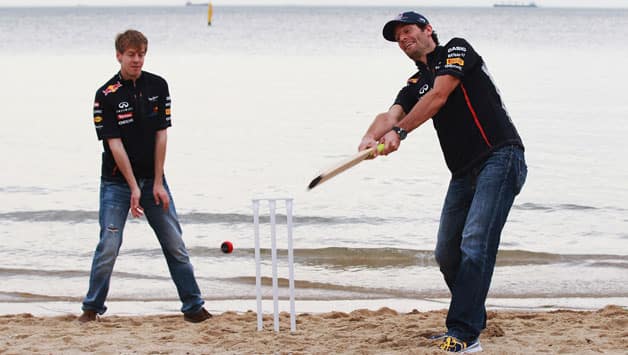 Germany’s ‘most famous cricketer’! Formula One aces Sebastian Vettel of Germany and Mark Webber of Australia try their hand at beach cricket on St Kilda Beach during previews to the Australian Formula One Grand Prix on March 14, 2012 in Melbourne © Getty images

As cricket-obsessed fans, we are hooked to following certain teams, and our cricketing heroes 24/7. The entire city gears up before every high voltage clash with a sizzle of anticipation and an unmatched excitement. Cricket fans tend to throng the stadium in big numbers by braving the heavy traffic, the horn-honking and the scorching sun to watch their heroes perform.

In midst of all this euphoria, have we ever thought that there is world beyond the nine Test playing nations known as associate teams? These are the teams who play in the lower rungs of cricket. Cricketers from associate countries too strain every sinew, and churn out impressive performances day in and day out.

Unlike the glittering stars plying their trade in big stadiums, and in front of thousands of fans, they play with little or no financial backing.  It is a testament to the sheer passion of associate cricketers that they are always ready to stand up and be counted for the sake of their nation.

One such team battling it out in the lower leagues of World Cricket is Germany. To the outside world, Germany is known for everything else but cricket. Yet, a dedicated bunch of expats and a few faithful fans are trying their level best to popularise the game in the country.

Germany became an affiliate member in 1991 and the International Cricket Council (ICC) granted them associate status in 1999. It was a step in the right direction. Since Germany was granted associate status, they have regularly taken part in the European Championships. Their best performance came in 2000 and in 2002, when they finished runners-up in Division Two in one-day cricket. They also play in Division Seven of World Cricket League (WCL).

At present, Germany is captained by the stockily-built middle-order batsman Asif Khan, who has been part of the German set-up since 2004 and is a vital cog in the line-up. He has engineered the German team to some fantastic wins over the years. In 2011, Asif Khan led from the front with a stroke-filled century against Botswana in WCL. He and Milan Fernando are two bedrocks of the batting line-up.

A few other cricketers like Andre Leslie, Shakeel Hassan, Farooq Ahmed, Sathya Srinivas, Ehsan Latif, Dilshan Rajudeen and Rana Javed Iqbal have played prominent roles in helping to raise the profile of the game in Germany. In 2010, the plucky Germans proved their mettle by finishing second in Division Eight, which earned them a promotion.

In spite of some sterling performances in the lower leagues of world cricket, it has always been a huge challenge for the administrators to promote the game. Germany’s captain Asif Khan though, is optimistic about the future of the game in the country.

In a recent interview, he said, “Keith (Germany’s cricket coach) has worked hard in the background looking for fresh talent, travelling to nearly all regional and DCB tournament finals and pinning down on probable candidates for the national team. He strives to find the correct blend of young enthusiastic as well experienced players to represent Germany at international tournaments. Over the years I have played in various sets of German teams, but to me the 14-16 players since Jersey 2010 have been the pick. It’s vital to encourage and get in new players so they gain experience by playing alongside seniors and carry on in the same vein as the past teams.”

Asif added, “In my eyes we’ve got around 10 standout cricketers between 22 and 28 years who could take on the mantle of responsibility for the next decade. They are aggressive and possess good understanding of the game. They need to be adequately coached and made to understand their roles and expectations from them in the team. It would be unfair not to name all of them, but Kashif Mahmood, Dilshan Rajudeen, Ashwin Prakash, Tarun Rawat, and Shafraz Shamsudeen are on the brink of cementing their places in the senior sides. Ritwik Marwaha and his brother Tushar have done well playing for the U19s and they’re highly talented.”

Germany’s cricket team faces all those typical problems that every associate nation goes through. Lack of funds to support the players financially has to be the first and foremost concern of Germany’s cricket administrators. The entire cricket structure in Germany is operated on an ad-hoc basis. Except for the manager of the team, no one else gets paid. The meagre funding that is allotted to them by ICC is just enough to cover travel and other miscellaneous costs. But unfortunately, no pay is awarded for any matches. The staff who with their diligence and hard work support the team are all volunteers.

Another major problem that is haunting Germany’s cricket is the fact that the ICC have now scrapped the European 50-over league. To make it worse, the ICC have gone ahead and scrapped the lower two divisions of the WCL. So, if Germany doesn’t get promoted to Division Six this season and manage to stay there, they will drop out of any international 50-over cricket staged by the ICC. The ICC indirectly is encouraging the associates to focus their attention on T/20 cricket. These are tough times for cricket administrators in Germany.

As it is an amateur sport, Germany’s players also have to worry about their own jobs, while representing the country. Their wicket-keeper, Sathya Srinivas in an interview says, “I cannot obviously involve my boss in all this. I am allowed a certain number of holidays in a calendar year and I need to accommodate the cricket tournaments for Germany in this schedule. The people at my company are really appreciative of the fact that I represent a national team. But my first responsibility is obviously towards my job.”

He also added by saying, “But there are people in our team who work as taxi drivers or work in restaurants, who basically take time off without getting paid during such kind of cricket tournaments for Germany. Everyone basically plays for the passion of the game.”

In Germany, domestic cricket is confined to playing T20s and 50-over cricket.  Both competitions are run on a league basis. Cricket-wise, Germany is divided into regions with each region comprising of a few federal states. The best team from each region, battle it out to be crowned as the t/20 or one-day cricket champions.

For the next season, Germany’s cricket board is looking at tinkering the domestic structure ever so slightly with a two-tier division. They have come up with a very innovative and novel concept that guarantees the promotion of a team to the first division. In Germany, to gain promotion, it doesn’t just depend on actual results, but the team that aspires to work their way up the ladder have to also provide evidence of contributing towards grassroots development.

In the last few years, under the leadership of German cricket federation’s General Manager Brian Mantle, they have taken up the gauntlet of branching out the game to more people through youth development programmes. All the hard work is yielding results too as last year the under-19 wicket-keeper Giancarlo Schöcke came through the system.

The next assignment for German cricketers is a trip to Botswana to play in World Division League seven. German cricketers will face a baptism by fire as the likes of Nigeria, Ghana, Botswana and Vanuatu are renowned for playing a tough brand of cricket. But make no mistake, the battle hardened cricketers from Germany playing for the sake of sheer passion will look to soar greater heights by winning the coveted world division league 7 trophy.