It has only been a few hours since Mamata Banerjee had announced Sourav Ganguly as the new CAB President.

Love him or hate him, you cannot ignore Sourav Ganguly. It has only been a few hours since Mamata Banerjee had announced Sourav Ganguly as the new President of Cricket Association of Bengal (CAB). Incessant arguments between fans and haters of Sourav Ganguly on social media that followed took almost no time for Facebook, the largest social networking website in the world, to crash. Sourav Ganguly, former Indian captain and hero of many a battle, was not available for a comment. His fans, found chanting ‘Didi names Dada’ following the appointment of Sourav Ganguly as CAB President till an hour back, vented their frustration by burning effigies of Mark Zuckerberg on the streets of Kolkata. Sourav Ganguly congratulated by Aditya Verma on becoming CAB chief

There are, however, rumours: while the general idea is that Facebook went down because of the incredible load on the servers following heated arguments, Facebook put up a message that read “sorry, something went wrong” (check the above picture). Sourav Ganguly fans are hinting that this was a deliberate action on the part of Facebook, as they claim is evident from the above message. Following their disgruntlement, they have been referring to Mark Zuckerberg in a not-too-polite fashion, replacing the first letter to make it sound extremely rude. Sourav Ganguly appointed CAB President: Twitter reactions

Several Indians on the street, on the other hand, were spotted doing unusual things. They were even spotted talking to friends and relatives in person. Manoj Tiwary: Sourav Ganguly is the best option for CAB President 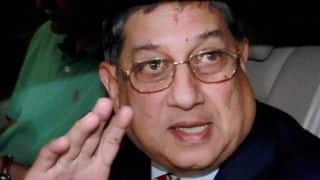