Chris Gayle continues to prove his credentials as a T20 force as he became the first batsman in the history of the Indian T20 League to smash 300 sixes. Gayle, playing his 115th match, achieved the feat during the third over of Punjab s chase against Mumbai by smacking Mitchell McClenaghan for back-to-back sixes, the second of which took him to the landmark. (Punjab vs Mumbai: AS IT HAPPENED)

Gayle went on to hit two more sixes taking his tally to 302 before Hardik Pandya dismissed him for 40 off 24 balls, a knock that included three boundaries and four sixes. It is a testament to the brute T20 skills of Gayle that no other batsman has managed to hit even 200 sixes in the Indian T20 League.

Gayle smacked his first six during his maiden season of the league in 2009, when he was playing for Kolkata against the eventual winners of that year, the Deccan Chargers. During his two-season long stint with Kolkata, Gayle scored 26 sixes. After that, he was picked by Bangalore, a franchise for which Gayle played for seven seasons. For Bangalore, Gayle was a destructive force and managed to score 239 sixes for the 2016 finalists. As of today, Gayle has 37 sixes for Punjab since joining the team last season. 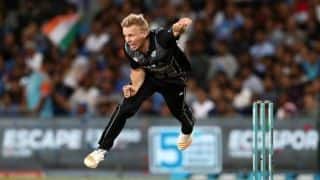