Welcome to our coverage from Match 9 of the Indian T20 League in which Punjab host Mumbai in Mohali today.

Coverage from the Match 9 of the Indian T20 League. Punjab will be playing their first home match of the season and will host Mumbai at the PCA Stadium in Mohali.

Summary: What a statement made by Punjab. They were unbeaten at Mohali last year and this time too, they have continued that winning run. KL Rahul, who took time to step on the gas, remains unbeaten on 71. Chris Gayle too played his part smashing 40 off just 24 balls. Mayank Agarwal ensured the momentum was kept smashing some lusty blows during his 43 off 21 as Punjab registered their second win of the season. Do stick around for all the post-match reports. From all of us here, it’s goodbye!

19th over: THAT’S IT! David Miller hits the winning runs as Punjab thrash Mumbai by 8 wickets. KL Rahul remains unbeaten on 71 off 57 — his innings studded with six boundaries and a solitary six.

15th over: KL Rahul finally steps on the gas smashing a huge SIX over deep backward point and a boundary at cover as Miller finished the over with a nice four to fine leg as this Hardik Pandya over yielded 19 runs. Punjab 140/2 (Rahul 43, Miller 8) need 37 runs in 30 balls

14th over: WICKET! Krunal Pandya has taken his second wicket, and it’s the danger man Mayank Agarwal, who has to depart. Brilliant caught and bowled there by the elder of the Pandya brothers, was smashed hard by Agarwal, but Krunal managed to hold on to it. David Miller has joined Rahul in the middle. Punjab 121/2 (Rahul 31, Miller 3)

13th over: Hardik Pandya’s second over goes for just 6 runs. While Agarwal’s keeping the momentum on, KL Rahul on the other hand, is struggling. Punjab 109/1 (Agarwal 35, Rahul 30)

12th over: No. 3 Mayank Agarwal has scored more than opener KL Rahul. Agarwal goes aerial in this over off Krunal Pandya, hitting him straight down the ground for a six. Rahul, who has spent a lot of time in the middle, has to move on now. Punjab 103/1 (Agarwal 33, Rahul 26)

11th over: Mitchell McClenaghan, who was clobbered for consecutive sixes by Gayle earlier in the innings, is back into the attack, his third over going for 7 runs. Punjab 91/1 (Rahul 24, Agarwal 23)

10th over: Half way done with the run-chase and Punjab are on track. Krunal’s second over going for 11 runs which included a boundary by Agarwal to backward point. Punjab 84/1 (Agarwal 21, Rahul 19)

9th over: Bowling change! The legspinner Mayank Markande has been brought into the attack and Mayank Agarwal welcomes him with two boundaries as Punjab are looking to keep up the run-rate despite the departure of Gayle. Punjab 73/1 (Rahul 17, Agarwal 14)

8th over: BIG WICKET! Mumbai and new bowler Krunal Pandya have got the wicket they were looking for and it’s Chris Gayle, who was looking to go big, but found the toe edge of the bat, goes high up into the air and Hardik Pandya takes an easy catch at long-on. Punjab 61/1 (Rahul 15, Mayank Agarwal 5)

7th over: GAYLE HAS GONE BERSERK! Hardik Pandya, introduced into the attack, has been deposited at least 10-20 feet back into the stands, TWICE by the Universe Boss Chris Gayle. The first one went bang over the sight screen, while the second sailed over the mid-wicket fence. Punjab 52/0 (Gayle 40, Rahul 11)

6th over: Bumrah has been brought back with Mumbai eagerly awaiting the wicket of Gayle. Gayle and Rahul did well to negotiate Bumrah with this over going for just two runs. Punjab 38/0 (Gayle 28, Rahul 10)

5th over: Malinga into his second over and he’s gone for 9 runs which included two fine boundaries by Chris Gayle. The big West Indies batsman is looking in the mood to score big. Punjab 36/0 (Gayle 27, Rahul 9)

4th over: Bowling change! Gayle’s consecutive sixes in the previous over pushed Mumbai for a bowling change. It’s Jasprit Bumrah, who has been introduced into the attack, and Rahul went after him, smashing a boundary past the cover point region. Punjab 27/0 (Gayle 18, Rahul 9)

2nd over: Lasith Malinga has bowled the next over, a tidy one, going for just three runs. Punjab 8/0 (Gayle 5, Rahul 3)

1st over: Mitchell McClenaghan has begun with proceedings at Mohali and was going well until the final delivery when Chris Gayle guided it nicely to the third man region for a boundary. Punjab 5/0 (Gayle 4, KL Rahul 1)

Summary: After a flying start from Rohit Sharma and Quiton de Kock, Punjab have managed to pull things back with Murugan Ashwin, Mohammed Shami and Hardus Viljoen all picking up two wickets each to curtail the flow of runs. De Kock has top scored for Mumbai with 60 off 39 — his innings laced with six boundaries and two towering sixes. But Punjab have done well to restrict the opposition. They made 91 in the first ten overs, and only 85 in the next ten. Stick around for the run-chase.

20th over: WICKET! Mohammed Shami has picked his second wicket in the dangerous Hardik Pandya, who was caught by Mandeep Singh at deep midwicket. Hardik departed for 31 off just 19 deliveries. Mumbai finish with 176/7

19th over: WICKET! Hardus Viljoen has got his second wicket after Krunal Pandya was looking to help its way with a shovel, but finds Murugan Ashwin, who ran across to his left from the deep and completed the catch with soft hands. The elder of the Pandya brothers departed for just 10. Mumbai 167/6 (Hardik Pandya 23, Mitchell McClenaghan 0)

18th over: WICKET! WHAT A CATCH FROM MAYANK AGARWAL! Andrew Tye has got his first wicket of the match and it’s the dangerous Kieron Pollard, who missed it completely and it went high up in the air, but Agarwal kept his cool and caught a perfect one at the long-off boundary. Mumbai 154/5 (Hardik Pandya 19, Krunal Pandya 2)

17th over: Hardus Viljoen back into the attack and Hardik Pandya welcomed him with a cracking boundary to the deep square leg region. Mumbai 146/4 (Pandya 15, Pollard 5)

15th over: WICKET! Murugan Ashwin has bowled his last over and picked a wicket as well — his second of the match — this one of Yuvraj Singh, who was trying to go big, but ended up finding Shami at deep backward square leg. Mumbai 131/4 (Pollard 2, Hardik Pandya 5)

14th over: R Ashwin is back into the attack. Kieron Pollard has joined Yuvraj Singh in the middle. Ashwin has gone for 4 runs in his over. Mumbai 124/3 (Yuvraj 17, Pollard 1)

13th over: WICKET! De Kock has taken the aerial route bashing a sensational pick up shot off Mohammed Shami, but the Indian pacer struck in the very next delivery trapping the South Africa leg-before. QDK’s fine knock comes to an end. He departs for 60 off 39. Mumbai 120/3 (Yuvraj Singh 15)

10th over: Half way into the game and Mohammed Shami is back into the attack. De Kock deposited one over the backward square leg boundary after Shami banged it too short. Mumbai 91/2 (De Kock 45, Yuvraj 3)

9th over: After claiming a wicket in his first over, Murugan Ashwin has conceded consecutive boundaries as Quinton de Kock has made his intentions clear, he’s shifting to the next gear! Mumbai 80/2 (De Kock 35, Yuvraj 2)

8th over: Ashwin has brought himself back into the attack at the right time with Yuvraj Singh, who has joined De Kock out in the middle, looking to go big. De Kock has shifted to the next gear striking a boundary as it beat short thirdman to the fence. Mumbai 71/2 (De Kock 26, Yuvraj 2)

6th over: BIG WICKET! Viljoen into his second over and he has taken the BIG WICKET of Mumbai captain Rohit, who departed for 32, that was plumb lbw. Mumbai 62/1 (De Kock 19, Suryakumar Yadav 11)

5th over: Another bowling change: Andrew Tye has been introduced into the attack and Rohit has just not allowed the Australian to settle down bludgeoning three boundaries. Mumbai 50/0 (Rohit 32, De Kock 18)

3rd over: Ashwin’s next over goes for 8 runs with De Kock registering a nervy boundary as he almost got caught at backward square leg, but the ball just sailed over the fielder. Mumbai 28/0 (Rohit 16, De Kock 12)

2nd over: Rohit Sharma has smashed two boundaries off Mohammed Shami in this over. The second one to sweeper cover was a freeze-frame moment as the captain pierced the gap at cover. Mumbai 20/0 (Rohit 14, De Kock 6)

1st over: Punjab sprang a surprise with their captain Ravichandran Ashwin opening the bowling and boy, was it a tidy over with the Tamil Nadu offspinner giving just seven runs. Quinton de Kock struck the first four with a nice touch to the third man boundary. Mumbai 7/0 (De Kock 5, Rohit 2)

3:32 pm: Ravichandran Ashwin has won the toss and Punjab have elected to bowl. The hosts have made one FORCED change with unfit Varun Chakravarthy making way for Murugan Ashwin. Mumbai remain unchanged.

Rohit Sharma: “We would have batted first anyway, so not really fussed. Having said that, we need to play good cricket. We were able to win our last game due to the bowling we had and it’s about putting enough runs on the board for them.”

Ravichandran Ashwin: “We will be bowling first. We want to make conditions in the daylight and make use of the easier batting conditions later on when the lights come on.”

3:25 pm: Pitch report: “The average first-innings score is 169. The average bounce here over the last three years hasn’t been that great when you compare with a stadium like Wankhede. There might not be much pace or bounce to work with although batting should still be alright if you dig in. Slower balls when not pitched fuller can be handy as Andrew Tye has shown,” opines Michael Slater at the pitch.

3:20 pm: What to expect from the pitch? A flat, hard-rolled pitch again with lots of runs on either side of the wicket. Michael Slater says it’s going to be a humdinger at the pitch report. This one’s going to be exciting guys.

2:57pm: Just to make things interesting, Punjab won all three of their home games in Mohali last year before moving to Indore following which they lost steam, so much so that they plummeted from the top of the table to finish second-last.

Punjab have had an eventful start to their Indian T20 League. In their season opener, their win over Rajasthan was overshadowed by mankading , something which continues to be a hot topic of debate that has polarised opinions. Their second match, a defeat to Kolkata, also made headlines with Punjab committing a fielding error that resulted in Andre Russell being given a life despite being bowled by Mohammed Shami. Russell went on to play a blistering innings that proved to be the difference between the two teams at Eden Gardens. (ALSO READ: You destroyed my day: Sanju Samson to David Warner)

While the outside world focuses on their errors, Punjab will be duly interested in the promise their early performances have shown. They won a contest against inaugural champions from what seemed to be a difficult position. Their batsmen have been in good touch, but the bowlers have been expensive across the two matches. They now host Mumbai for their first home match of the season. Click here to read more 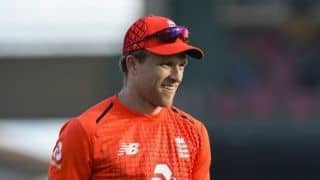