Faf du Plessis made his name to record books with his bowling skills.

March 11, 2012. Lions and Titans clashed in a MiWAY Challenge match. Batting first, Lions raced to a quick 97 for 1 before Titans captain Martin van Jaarsveld summoned Faf du Plessis to bowl his seemingly innocuous leg-breaks. Lions still managed to put up 163 for 7, but while they were at it, du Plessis made his name to record books with his bowling skills. Abhishek Mukherjee looks back at a world record that is seldom mentioned.

While part-timers are more likely to strike in 20-over cricket than in the longer formats, it must also be remembered that they get to bowl a maximum 4 overs a match; less, if they go for runs early in their quota.

But overall, they get wickets more frequently; and in some cases, like the one in question, Faf du Plessis took more wickets from 8 overs than most specialist bowlers could imagine, let alone achieve.

Make no mistake, du Plessis is no ordinary bowler. South Africa’s superlative pace attacks and plethora of all-rounders meant that du Plessis seldom had opportunities to bowl at the highest level. With Imran Tahir emerging as a regular limited-overs bowler, Faf’s services as leg-spinner were seldom needed. And then, he was named T20I captain… READ: Du Plessis: Fire-fighter who revels under pressure

On February 24, 2010, Faf played the Standard Bank Pro20 semi-final for Titans. He averted the initial storms with a cautious 23; and when Lions were set to chase 144, du Plessis fought a lone hand, removing Neil McKenzie, Vaughn van Jaarsveld, and Thami Tsolekile. Lions needed 17 off the last over, but Jean Symes and Robbie Frylinck knocked Titans out of the tournament.

International duties (including a World Cup) beckoned, and du Plessis did not play a single T20 match over the next 19 months. He had a season for Ramsbottom in between as well. Then came the CSA Provincial T20 Challenge Inland Pool match.

The match was not a memorable one per se: du Plessis walked out after Pieter Malan and captain Francois le Clus added 60 for the opening stand, and fell for 6. De Clus made a solid 49, and thanks to some big shots and quick running from Graeme van Buuren and Shershan Naidoo, Northerns put up 158 for 6.

Easterns, in response, got off to a good start as well, Mpho Sekhoto and Ruan du Plessis (no relation to Faf) adding 42 in 5 overs. When du Plessis came on, they needed 90 from 60 balls, with 8 wickets in hand.

Du Plessis struck with his second ball, trapping Cobus Pienaar leg-before. Two balls later he removed Rushdi Jappie. In his second over, he sent Mangaliso Mosehle back, stumped; in his next, he bowled captain Sean O’Connor; and in his last, he accounted for Brad Moses, taking wickets in every over.

Du Plessis finished with 5 for 19 from 4 overs. With Eden Links doing a tight job at the other end, Easterns were left to score 50 from 3 overs. Despite some enterprising batting from Shaun Liebisch and Hardus Viljoen, they fell 13 runs short. READ: Faf du Plessis: Golden Run in international cricket

That remained Du Plessis’ last T20 for five months. He returned for a match for Titans against Dolphins in the MiWAY T20 Challenge, a week after the previous match. The match was abandoned before the Dolphins innings.

Nobody probably anticipated what was in store when Titans took field against Lions. It started off as just another T20 contest: Lions got off to a cautious start before Jonathan Vandiar and Gulam Bodi fell in the fourth over. Then Quinton de Kock and McKenzie took control, adding 76 in a mere 8 overs. After 12 overs the score read 97 for 2.

Of those present at New Wanderers that day, how many expected Faf to have a wicket off his first ball? He tossed the ball up, de Kock went for the reverse-sweep a la Mike Gatting off Allan Border in 1987 World Cup final, and Farhaan Behardien took an easy catch. Five balls later Dwaine Pretorius was clean bowled.

Symes walked out. McKenzie tried to cut loose, but Roelof van der Merwe used all his experience, conceding a mere four. And though McKenzie pulled one for four, du Plessis came back next ball to hit timber.

Chris Morris was yet to assume the stature he would a few years later. Here, he walked out, cleared the straight boundary off du Plessis, and was bowled next ball to give him his fourth wicket.

Du Plessis already had the record. Six years before the match, Mohammad Asif had taken 5 for 11 and 4 for 14 in consecutive matches for Sialkot Stallions, against Faisalabad Wolves and Multan Tigers respectively.

Du Plessis became the second. But there was more to follow.

Alfonso Thomas bowled a tight over at the other end. And despite the fact that Albie Morkel had an over left, Martin van Jaarsveld entrusted Faf with the 19th over. Symes, one of the hardest hitters of his side, managed a single.

Tsolekile, captain and wicketkeeper of Lions, was now on strike. He had been pushing the ball around for ones and twos, but he now knew that the time has come for big hits. He went for one; and was bowled.

And Francois du Plessis achieved something no one had (or has, at the time of writing this article): five-fors in consecutive innings in T20s. Just in time, too; it poured down before another ball was bowled.

After play resumed, Symes hit one past fine-leg for four to ruin Faf’s figures; he finished with 5 for 28, which meant his figures across two matchers (spanning over six months) read 8-0-47-10. Symes hit a six off the last over, and ran frantically with Sohail Tanvir to make sure Lions reached 163 for 7.

Du Plessis and van Jaarsveld, armed with big-hitting abilities and infixes, managed some boundaries off Morris and Tanvir; but once both fell in quick succession, followed by Albie, steam ran out of Titans. Behardien was the only one to put up some fight (including three sixes in four balls from Pretorius), but another double-blow from Morris put brakes on the chase.

With 44 required from 24 balls they still had a chance, but Tanvir and Dirk Nannes made sure Lions won the contest by 16 runs.

Note: In his next match, for Andhra against Assam in 2016, Stephen took 4 for 14. He is the only bowler to take four-wicket hauls in three consecutive innings. 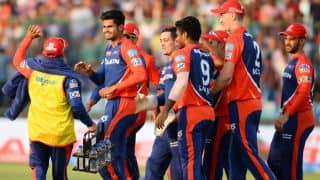