Fanie de Villiers, born October 13, 1964, was one of South Africa’s most entertaining cricketers post their reinstatement in 1991. A fast bowler who troubled many a batsman with his out-swingers and off-cutters, notably Sachin Tendulkar, he donned 18 Test and 83 ODI caps before calling it quits from the game. Karthik Parimal looks back at the glittering career of this speedster from Transvaal. 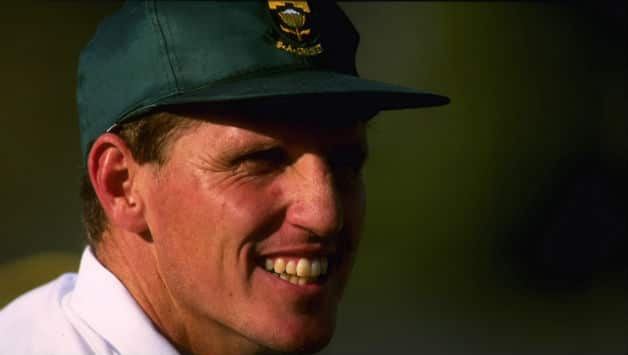 Fanie de Villiers, born October 13, 1964, was one of South Africa’s most entertaining cricketers post their reinstatement in 1991. A fast bowler who troubled many a batsman with his out-swingers and off-cutters, notably Sachin Tendulkar, he donned 18 Test and 83 ODI caps before calling it quits from the game. Karthik Parimal looks back at the glittering career of this speedster from Transvaal.

He was one South African cricketer the crowds, in almost all cricket-playing nations, took a liking to. While most players refrain from acknowledging the cheers (and jeers) emanating from the stands, Petrus Stephanus de Villiers, popularly known as Fanie de Villiers, was often found happily interacting with the spectators from his fielding position at the boundary ropes. The batsmen, however, seldom saw that amicable nature of his when he ran in with the leather ball in his hand. His out-swingers had them hopping at the crease like a cat on a hot tin roof and they knew he meant business.

De Villiers’s father was a farmer in Free State, and hence, it was against the backdrop of the countryside that he had his first brush with the sport — an uncle of his thwacked tennis balls high into the air for de Villiers to take catches. Although South Africa was dipped in apartheid at the time, his family had no knowledge of it. The press wasn’t allowed to report on the issue, but through it, de Villiers idolised rugby players, and Clive Rice, Graeme Pollock and Garth Le Roux were three cricketers he’d heard of. He made his First-Class debut at 22 for Northern Transvaal B.

The following year, de Villiers became a lieutenant in the army. He attributes much of his discipline to the time spent with the cavalry, saying, “Three o’clock you start waking up, five o’clock you are at breakfast, seven o’clock, when the sun is out, it’s half a day gone already. I wish some of our youth can go through some of this to become solid citizens,” in an interview to ESPNCricinfo. An Afrikaner, he struggled to communicate in English, but that wasn’t the language required to thrive in the domestic arena before banging on the doors of the selectors for a berth in the national side.

After the apartheid era, the International Cricket Committee (ICC) reinstated South Africa into the cricketing circuit in 1991 and, the following year, de Villiers donned the green mantles for the first time, at the age of 29, in what was also his country’s first One-Day International (ODI) at home. Although wicketless, he was one of the five economical bowlers instrumental in restricting India to a paltry total of 184. South Africa won the match by six wickets. If his maiden outing on the big stage was a sombre affair, his first series in whites was one for the archives.

De Villiers made his Test debut against Australia during the Boxing Day Test of 1994 at Melbourne, a game that ended in a turgid draw. It was the next fixture, at Sydney, where he came into prominence with éclat. After Shane Warne’s wizardry with the ball, the South Africans were on tenterhooks. De Villiers and Allan Donald chipped in with four wickets a piece to restrain Australia to a moderate total, but the lead, 123 runs, was still a considerable one. In reply, Warne shot back with yet another five-wicket haul and set his batsmen a meagre 117 to win with four sessions of play still left.

At the start of the Australian innings, Tony Greig noted from behind the microphone that the South Africans had a million-to-one chance of pulling off an upset. By the end of fourth day’s play, de Villiers bowled Michael Slater — beating him with swing as the ball changed course to clip the top of his off-stump —, had David Boon caught, trapped Tim May right in front of the wickets and had Mark Taylor nick one to wicketkeeper Dave Richardson. Stumps were called with Australia on 63 for 4, but Greig’s opinion stood firm notwithstanding, although he now gave the South Africans a 100-1 chance.

The next morning, he broke through Ian Healy’s defences before Donald charged in to get of the lower middle-order. At 111 for 9, a mere 6 short of the target, de Villiers deceived Glenn McGrath with a relatively slower delivery and, the genuine tail-ender that he was, McGrath lobbed it back to the bowler for one of the softest dismissals ever. The South Africans’ joy knew no bounds. De Villiers, celebrating on exactly the centre of the turf, had registered a six-wicket haul, a performance that duly earned him the Man of the Match award. “One thing you must remember: South Africans never give up,” he told Greig, who was incidentally the presenter during the post-match ceremony.

“You guys are history”

After the heroics at Sydney, his reputation as a sturdy bowler was on the ascendancy. During the summer of 1994, South Africa toured England for a three-Test series and de Villiers finished as the highest wicket-taker with 12 scalps to his name. It was during the Oval match that his tactic of bowling short-pitched deliveries to tail-enders stoked ire. One such ball smashed into English fast bowler Devon Malcolm’s helmet. Upon recuperating from a brief state of daze, Malcolm apparently blurted to the close-in South African fielders, “You guys are history.”

True to his word, Malcolm dished out a career-best performance, taking nine wickets in South Africa’s second innings to steer England to an eight-wicket victory. A barrage of short balls greeted the South African batsmen, and while many attributed that performance to de Villiers’s provocation, English skipper Michael Atherton believed it was because he’d given Malcolm a private roasting for his sparing use of bouncers. “The story goes, of course, that the motivation for Malcolm’s performance came after he had been hit on the head, while batting, by Fanie De Villiers. After the stuffing from his helmet had stopped swirling around his dazed head, Malcolm had reputedly and prophetically said, ‘You guys are history!’ Darren Gough was at the other end and later confirmed this to be an apocryphal story,” stated Atherton in his autobiography Opening Up. 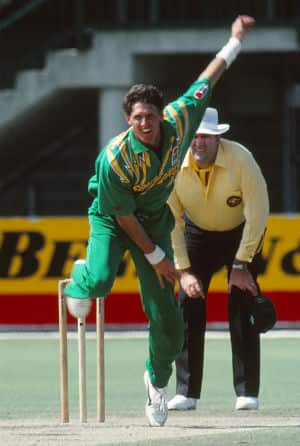 Never one for mainstream

The year 1995 marked De Villiers’s best in his cricketing career. He took 36 wickets in five Tests at an average of 17. He also became the first South African to notch a fifty and take 10 wickets in the same Test, when, against Pakistan at Johannesburg, he scored an unbeaten 67 and registered figures of 6 for 81 and 4 for 27. The performances led him to being named South Africa’s Annual Cricketer of the Year. There was no questioning his work ethic as a player, but his on-field mannerisms were at times downright hilarious, if not absurd.

For instance, he always rubbed the ball in his armpits, as opposed to the customary usage of sweat from the forehead. Although the umpires often grumbled about it, De Villiers reckoned using spit to shine the ball was even worse. He also never refrained from joking with the umpires, even if it was at a crucial juncture of the game. He once red-carded umpire David Shepherd for turning down a leg before wicket (lbw) appeal (by using a red coloured autograph book that somehow made its way into the pocket) at Headingley, and while the members seated in the Long Room expressed their displeasure at the harmless fun, he red-carded them, too.

On tours, he was never one to shut himself in the confines of a hotel room. In Kolkata, he would hop into a tuk-tuk and dine with the driver in the latter’s house. He would ride the local train in Sri Lanka before getting off midway to play cricket in the streets with the kids. Also, Jonty Rhodes’s jerseys would frequently be swapped at these places for cases of beers and brandies.

It was a shame that frequent injuries punctuated de Villiers’s glittering career, but 18 Tests and 83 ODIs, especially after being a part of one of the very first troops to take to the international arena after reinstatement, is commendable. Moreover, he’d made Sachin Tendulkar his bunny during the late 1990s with his lethal off-cutters, a fact de Villiers proudly continues to highlight in his resume. “County cricket [he represented Kent] taught me how to bowl the off-cutter, which is what you should bowl to Tendulkar all the time. I am not talking slower balls — the fast off-cutters,” he stated in an interview to ESPNCricinfo.

After retiring from all forms of the game, de Villiers worked his way into the press box, but at the time, the game had certainly becoming poorer after his exit. Very few brought joy to the sport, and importantly to the fans, like he did.

India A vs West Indies A: Players who impressed in the three-Test series