In our previous two instalments we have discussed the first Tests played by Australia, England, and South Africa, and by West Indies, New Zealand, and India. Then came the gloom of the Second World War, almost eradicating cricket off the face of earth for half a decade.

However, the sport stayed alive in India, in the form of high-scoring matches in the Ranji Trophy and the Bombay Pentangular, the latter being on its last legs. Partition ripped the country apart, but it was only a matter of time before Pakistan were granted Test status, on India s recommendation, on July 28, 1952.

There was little doubt that Pakistan s first Test would be against India (this meant that Pakistan became the first team to make their debut in a Test not involving England). So related were the two countries at that stage that it could well have been a match involving two domestic sides.

Pakistan were led by Abdul Hafeez Kardar, who had played 3 Tests for India. Also in the squad was former Indian Test cricketer Amir Elahi. On the other hand, Gul Mohammad, who played the series (and earlier series) for India, would later play for Pakistan. Indian captain Lala Amarnath had been brought up in Lahore. There were more.

The first tour match, against North Zone at Amritsar, was near-homecoming for many of the tourists, and they were greeted warmly by the locals. They started off well in their first Test, reducing India to 195 for 7 and even 263 for 9. But Hemu Adhikari, batting down the order, added 109 for the last wicket with Ghulam Ahmed.

Pakistan openers Hanif Mohammad and Nazar Mohammad added a painstaking 64. Then they crumbled to 150 and 152 against Vinoo Mankad (8 for 52 and 5 for 79) and lost by an innings.

It was not the greatest of starts, but Pakistan hit back immediately, winning their second Test on a matting wicket at Lucknow. They then won a Test at The Oval in 1954. In the same decade Kardar would lead them to victories over Australia, West Indies, and New Zealand (they obviously didn t play South Africa at that point).

No team has started their Test career on such high. But then, no team has been quite like Pakistan.

The Colombo Cricket Club dates back to 1832. In 1901, Colombo witnessed the first instance of a South African team playing cricket in the subcontinent. Ashes parties often landed in Ceylon, and when they did, they indulged themselves in one-day matches against the locals. Don Bradman, no less, did it twice, in 1930 and 1948

The Rest, the fifth team in the Bombay Pentangular, featured Sri Lankan cricketers; Ceylon competed with Madras in the annual MJ Gopalan Trophy; Michael Tissera led Ceylon to a win against India at Ahmedabad in 1964-65; and Sri Lanka participated in the first two World Cups.

Their biggest break came in the 1979 World Cup, where they felled India against all expectation. The Test status came on July 21, 1981, and Sri Lanka played their first Test a year later. Their opposition was a beleaguered England: they had played one of the most boring series in history (in India); Geoff Boycott s international career had ended abruptly; and half their side had planned a secret tour of South Africa.

Bandula Warnapura won the toss, took first strike, scored the first run, and was the first batsman to be hit in Test cricket for Sri Lanka. Ranjan Madugalle and Arjuna Ranatunga scored fifties and added 99 but received little support: Sri Lanka were bowled out for 218.

But Ashantha de Mel, a young fast bowler, and Somachandra de Silva, their quadragenarian leg-spinner, hit back. The Englishmen were made to scrape for runs. From 200 for 5 they were bowled out for 223.

Roy Dias then put Sri Lanka on the top with a sublime 77. And then, from 113 for 1, they collapsed against the spinners, John Emburey and Derek Underwood, for 175. England won by 7 wickets.

Teams touring South Africa often played at Rhodesia (now Zimbabwe). The Salisbury (now Harare) vs Bulawayo matches date back to before the Boer Wars. Rhodesia participated in the Currie Cup (albeit sporadically) from 1904-05, they had their share of South African Test cricketers. They flourished in the 1970s in South African domestic cricket under Mike Procter.

They last played Currie Cup in 1979-80 under the name of Zimbabwe-Rhodesia. They won the 1982 ICC Trophy, won their first ODI (against Australia in the 1983 World Cup), and played both the 1987 and 1992 World Cups. They beat England in the latter.

Full membership came later that year, and they hosted India for their inaugural Test. The match featured the return of the Egypt-born 45-year-old Greek John Traicos, who had played for South Africa 22 years 222 days ago: the gap remains a world record.

Dave Houghton won the toss and scored 121, batting at No. 6. The Flower brothers both got fifties. The Zimbabweans dominated the Test from the onset. You could not blame them for batting slowly (run rate 2.12 for their 456): it was their first Test, after all.

The Zimbabwe innings ended only due to a collapse (417 for 5 to 456), that too on the third morning. In response India were left reeling at 101 for 5 by some accurate, probing bowling. The Indian rearguard act was led by Sanjay Manjrekar, who scored the slowest hundred by an Indian, in 422 balls and over eight hours. India saved the follow on but conceded a 149-run lead.

Even at that age Traicos finished with figures of 50-12-86-5, but it was already the final morning. The Zimbabweans played out time and left the ground with heads held high.

Cricket was played in Dacca in the 19th century. Dacca also has a curious place in cricket history: it is the birthplace of Bransby Cooper, who played the first Test in history. Probir Sen, the first great Indian wicketkeeper, was born in Comilla, then in India.

Bangladesh also hold the bizarre distinction of hosting (in a way, or perhaps not) Tests before it became a country. In fact, Dacca hosted the first Test on Pakistan soil, in 1954-55.

Bangladesh Cricket Board was formed in 1972, a year after their Independence. They became an Associate Member of ICC in 1977, but failed to create an impact in international cricket for two decades. They failed to make it to the World Cup before 1999. They did play ODIs in between, all of them in the Asia Cup and the Austral-Asia Cup, and they even hosted the 1988 Asia Cup.

The late 1990s saw several incidents within a very short span of time. They won the 1997 ICC Trophy, which made them a full member. In 1998 they won their first ODI, in 23 attempts, against Kenya. Later that year they hosted the inaugural ICC Champions Trophy. And in the 1999 World Cup they beat Scotland and stunned Pakistan (they had sacked coach Gordon Greenidge on the morning of the match).

The Test status came shortly after that. Bangladesh started their inaugural Test on a high after Naimur Rahman opted to bat. Habibul Bashar scored a delightful 71, while Aminul Islam batted for over 9 hours for his 145. Bangladesh scored exactly 400.

Nine Bangladeshis had reached double figures. Nine Indians did the same. Sunil Joshi, who had taken 5 for 142, now scored 92. Naimur Rahman (6 for 132) and Mohammad Rafique (3 for 117) bowled 95.3 overs between them to restrict the Indians to a 29-run lead.

Then Bangladesh achieved a bizarre world record. For the first time in the history of Test cricket, every single batsman of a side scored fewer runs in the second innings than in the first. Bangladesh were shot out for 92. This time Joshi took 3 for 27. India strolled to a 9-wicket win.

Player of the Match: Sunil Joshi. 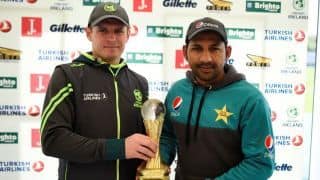 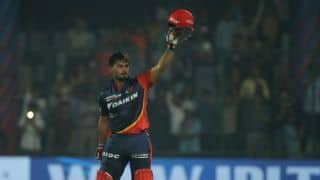