Fred Trueman had 90 wickets that season till the Warwickshire match at Bradford. He took 3 wickets in the first innings.

They were at the peak of their forms, especially Trueman. At this stage Trueman was also the fastest bowler in the world. He was also supremely fit: he had bowled over a thousand overs in 1959, and would do that again in 1960, and in 1961, and 1962: and this is only First-Class cricket that we are talking about.

However, one thing still remained: Trueman had never come first in the race for the first man to a hundred wickets in an English First-Class season. 1960 was the first time — and the only time in his illustrious career — when he became a serious contender for that.

He had 90 wickets that season till the Warwickshire match at Bradford.

Trueman showed up early that day and headed for the dressing-room — the Warwickshire dressing-room, that is. He had a chat with the opposition cricketers before joining his teammates at 11, an hour before the scheduled start.

Thankfully for Warwickshire, Vic Wilson won the toss and Yorkshire took first strike. Rain kept the players on and off the ground on the first day. Wilson declared on 304 for 9 the next day, a score made possible largely because of a 132-run second-wicket stand between Doug Padgett (113) and Brian Bolus (60). At 218 for 3 Yorkshire looked set for a massive score before Ossie Wheatley (7 for 109) cut them short.

Norman Horner (who had earlier played a season for Yorkshire) managed to get off strike in Trueman’s first over. ‘Billy’ Ibadullah was not so lucky: he edged a lifter to Ray Illingworth. Arnold Townsend went the same way in the same over.

For a moment it seemed Trueman would keep his word. Michael Cowan, that perseverant left-arm toiler, got Horner at the other end. Don Wilson got Barry Fletcher, and Warwickshire became 49 for 4.

Mike Smith, nervous-looking but resolute in his glasses, hung on grimly for his 59. Some support came from Ray Hitchcock, but then Vic Wilson got Jack Birkenshaw to bowl. There was a flurry of wickets before Trueman and Cowan came back.

Trueman had a couple of catches dropped off him. He finally got Jack Bannister caught by Jimmy Binks, with whom he formed one of the greatest bowler-wicketkeeper pairs in history. Like Ibadulla and Townsend, Bannister fell for a duck as well. Cowan rounded things off, and Warwickshire followed on after conceding a 162-run lead.

Trueman was obviously tired. He had bowled 17 overs (the most from his side) in an innings of 50, all at scorching pace. Everyone expected Vic Wilson to give him some rest, getting the spinners Don Wilson, Birkenshaw, and Illingworth to bowl through most of the evening session.

All it took Trueman to get pumped up was a wicket at the other end. This time Horton went first, caught Bolus off Cowan. And Trueman scythed through the middle-order, removing Townsend, Smith, Ibadulla, Smith, and Hitchcock.

The score read 32 for 5, of which Trueman had taken 4; and to the glee of the Bradford crowd, Vic Wilson claimed the extra half an hour.

Now the fun began. With 97 wickets under his belt there was no way Trueman would come off. Vic Wilson tried to take him off, and rightly so. Trueman was clearly too tired to continue.

The efforts went in vain. Trueman almost snatched the ball and went to the mark. Unfortunately, he could not muster any pace, and Wilson replaced him with Birkenshaw.

Trueman was aghast, and when that happened, he could become almost juvenile: “I’ll never bowl for Yorkshire again and don’t send me back to leg-slip because if you do I shall drop anything that comes near me — like these bastards have been doing off me all day.”

But then, Trueman was one of the greatest fielders England had in the leg-trap, at short-leg or leg-slip. He was duly sent there, and he immediately pulled off a stunner off Birkenshaw — one must remember he was dead tired at this stage — to send Fletcher back.

He obviously demanded another over. He got his wish, and immediately bowled one John Kennedy, of no known relation to his famous namesake. Nothing barring adrenaline would have got that one for Trueman.

Unfortunately, however hard he tried he could not break through again that day: Bannister and Geoffrey Hill took the score from 37 to 69, and they still had 3 wickets in hand.

Cowan stuck within minutes on the final day. Trueman now had to take the final two wickets. Now wicketkeeper Jackie Fox was no Don Bradman, and Trueman fancied his chance against him.

There was some resistance before Fox — not displaying any of the intelligence one would associate to a man of such a surname — chased one and edged to Binks.

Wheatley walked out. He was an excellent seam bowler, but his career tally of First-Class 1,252 runs would barely exceed his 1,099 wickets. Yes, he was the bunny bowlers dream of having a go at.

In his first six innings of the season he had got off the mark only once. However, there was some hope, for he had scored 15 in his previous match (against Sussex) scoring every single run of a last-wicket stand with Hill. Warwickshire had scored only 109.

Trueman had bowled unchanged since morning. He was simply functioning on will-power, but the wicket of Fox, combined with the sight of a target as easy as Wheatley kept him going.

Unfortunately, while he could still run in to bowl, he did not have the focus to get that one straight, fast ball that would have got Wheatley in a jiffy. Instead, he bowled a short, medium-paced ball outside off. Wheatley left it alone, but the ball kept chasing him, hit the withdrawn bat, and by some strange magic managed to pierce the slip cordon and run to the fence.

Only Trueman could have retained his sense humour: “Well, that’s the first time I’ve been left alone for four.”

Being a fast bowler, Wheatley had probably anticipated a bouncer next ball. He made a visible initial movement. The exhaustion, combined with this late development, got a slow, straight full-toss out of Trueman. Wheatley, the quintessential No. 11, swished and missed.

But there was more drama, for the bails had been dislodged before the ball hit the stumps. Wheatley, you see, had lost control of his bat in the process; the bat, more or less useless in the hands of its owner, won the race to the stumps.

The dismissal that made Trueman the quickest to the milestone in 1960, thus, read OS Wheatley hit wicket bowled FS Trueman. 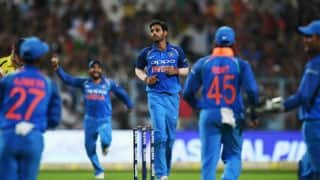 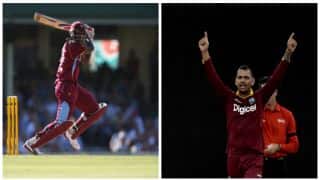